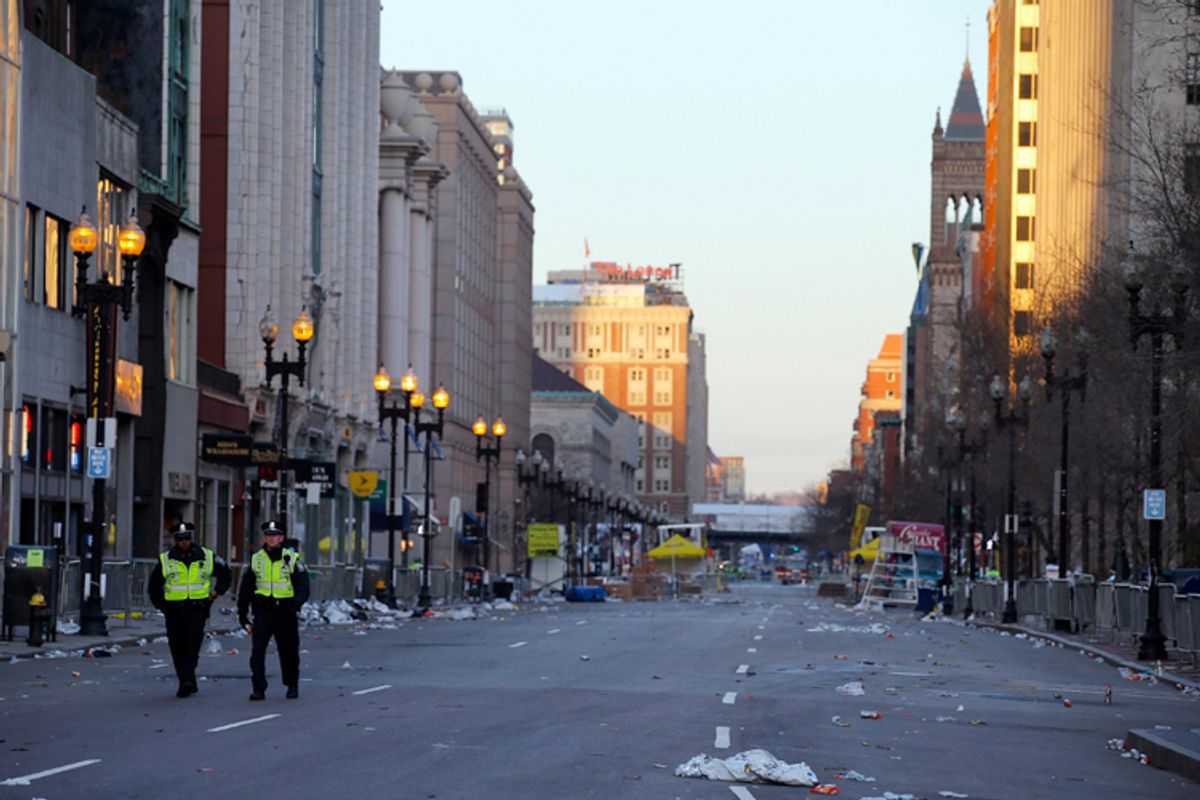 Two police officers walk down Boylston Street, away from the finish line of the Boston Marathon in Boston, Massachusetts April 16, 2013. (Brian Snyder / Reuters)
--

BOSTON (AP) — The painstaking work to identify a bombing suspect from reams of Boston Marathon footage yielded a possible breakthrough as investigators focused on a man seen dropping off a bag, and then walking away from the site of the second of two deadly explosions.

The discovery of the image — found on surveillance footage from a department store near the finish line — was detailed by a city politician two days after the attack that left three people dead, wounded more than 170, and cast a dark shadow over one of this city's most joyous traditions. The footage hasn't been made public.

President Barack Obama planned to attend an interfaith service honoring the victims Thursday in Boston. There was a heavy police presence around the city's main Roman Catholic cathedral as residents lined up before dawn, hoping to get one of the roughly 2,000 seats inside. By 9 a.m., they were being turned away.

Streets were blocked off around the Cathedral of the Holy Cross in Boston's South End.

Among the hundreds in line was 18-year-old Eli Philips. The college student was a Marathon volunteer and was wearing his volunteer jacket on Thursday morning.

He said he was still shocked that "something that was euphoric went so bad."

Ricky Hall, 67, of Cambridge, showed up at 8 a.m. but was turned away from the line to get inside that was already stretching down at least two city blocks, so decided just to stay outside.

"I came to pay my respects to the victims," he said, but was also angry that someone would desecrate the marathon and urged maximum punishment for the perpetrator.

Massachusetts Gov. Deval Patrick said he shared the frustration that the person or people responsible were still at large, but he said solving the case will not "happen by magic."

"It's going to happen by doing the careful work that must be done in a thorough investigation," Patrick said. "That means going through the couple of blocks at the blast scene square inch by square inch and picking up pieces of evidence and following those trails, and that's going to take some time."

The bombs were crudely fashioned from ordinary kitchen pressure cookers packed with explosives, nails and ball bearings, investigators and others close to the case said. Investigators suspect the devices were then hidden in black duffel bags and left on the ground.

As a result, they were looking for images of someone lugging a dark, heavy bag. Investigators had appealed to the public to provide videos and photographs from the race finish line.

City Council President Stephen Murphy, who said he was briefed by Boston police, said investigators saw the image of the man dropping off a bag and matched the findings with witness descriptions of someone leaving the scene.

One department store video "has confirmed that a suspect is seen dropping a bag near the point of the second explosion and heading off," Murphy said.

Separately, a law enforcement official who was not authorized to discuss the case publicly and spoke to The Associated Press on the condition of anonymity confirmed only that investigators had an image of a potential suspect whose name was not known to them and who had not been questioned.

Several media outlets reported that a suspect had been identified from surveillance video taken at a Lord & Taylor department store between the sites of the bomb blasts.

At least 14 bombing victims, including three children, remained in critical condition. Dozens of victims have been released from hospitals, and officials at three hospitals that treated some of the most seriously injured said they expected all their remaining patients to survive. A 2-year-old boy with a head injury was improving and might go home Thursday, Boston Children's Hospital said.

On Wednesday, investigators in white jumpsuits fanned out across the streets, rooftops and awnings around the blast site in search of clues. They picked through trash cans, plastic cup sleeves and discarded sports drink dispensers.

Marian Wilson said she tried not to notice the men slowly pacing and looking for evidence on the street behind her as she ate a tuna sandwich at Stephanie's on Newbury, a restaurant a block from the site of the bombings.

"I just go in and out of being completely freaked out," she said.

Boston remained under a heavy security presence, with scores of National Guard troops gathering among armored Humvees in the Boston Common.

Kenya Nadry, a website designer, took her 5-year-old nephew to a playground.

"There's still some sense of fear, but I feel like Boston's resilient," she said. "The fine men in blue will take care of a lot of it."

Dr. Horacio Hojman, associate chief of trauma at Tufts Medical Center, said patients were in surprisingly good spirits when they were brought in.

"Despite what they witnessed, despite what they suffered, despite many of them having life-threatening injuries, their spirits were not broken," he said. "And I think that should probably be the message for all of us — that this horrible act of terror will not bring us down."

Obama and his challenger in the last election, former Massachusetts Gov. Mitt Romney, planned to visit Boston on Thursday to attend the vigil.