As public school children sit down to take standardized tests, educators explain why they don't work 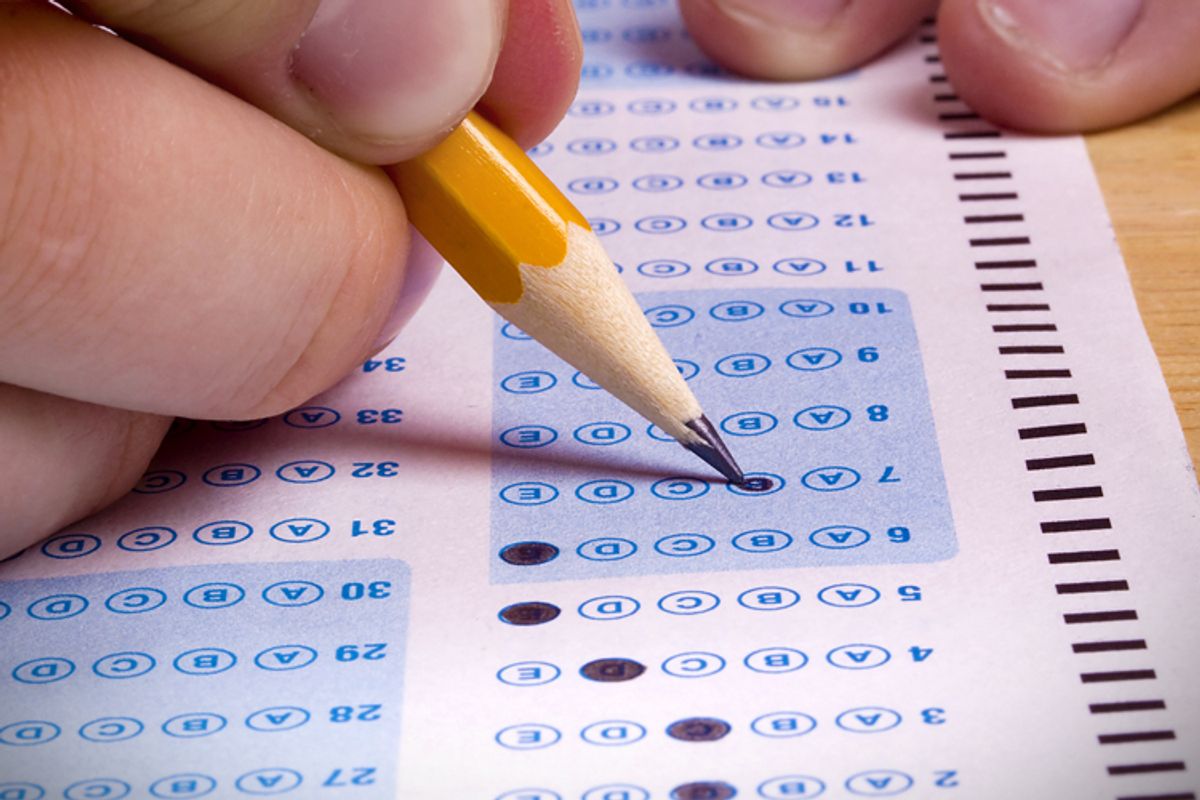 It's called a "prep rally." This week, New York public school students are taking their standardized tests, in line with the national Common Core Learning Standards. Last week, the principal of my third grader's progressive, learn-by-doing school sent home a letter about the "overemphasis on assessments and the unintended consequences of using state tests to promote students and evaluate school," a letter in which she promised the education our students receive there "cannot be measured by a single test score."

And the next day, the faculty shepherded the entire student body into the gym to cheer for the students to "Do your best" and sing, to the tune of "Ghostbusters," that they were "test crushers."

The rally may have been a well-intentioned attempt to defuse students' pre-test jitters. A school administrator later told me, "It wasn't to further promote testing. It was just about increasing confidence." Our principal echoed the sentiment, saying, "We did a very intense test prep this year. We recognize that our kids were saturated and starting to feel overload. The kids seemed like they needed the let loose." And, she noted, "The idea of bringing a group together to garner enthusiasm is something we do all the time."

But the ultimate effect had a strangely "Hunger Games" tang to it – a mood of forced, rah-rah reassurance to the terrified children going into the arena, cheered on by those too young to yet participate.

Unnervingly, it was a scene being played out in other schools all around the country, as they too have prepared their students for a series of tests many have been practicing for since September. The night of the rally, I spoke to my schoolteacher friend Blair in Pennsylvania, who told me they'd done similar events at her school and both of her sons' schools, complete with near-identical catchy songs and even merchandise giveaways.

"They sang 'I will do my best best best' to the tune of 'Dynamite.' It would have been cute if it wasn't evil," she said. "They hang up banners in the schools that say 'I will do my best on the test.' We get robocalled from all three schools before the test days. It's all almost exactly the same wording from each principal. It's a disgrace." Next year, up to half of her salary will be tied to how her students performed on their tests, a system that puts teachers who work with English learners or children with special needs -- who might be great students but not great English language test takers -- at risk for punitive measures.

But teachers are far from the only ones who feel the effects of the high stakes testing game. My high school teacher friend Ariel says, "My honors English curriculum now contains only two books, instead of the 12 I used to teach. And very few short stories. It's mostly nonfiction, because that's what will be on the tests. Any books I teach outside of the curriculum will harm my students' scores on the tests that evaluate them and my performance. Goodbye, 'Lord of the Flies.' Goodbye, 'Macbeth.' Goodbye, 'A Separate Peace.' Most good teachers are demoralized by the test, and horrified by what it is doing to education."

Meanwhile, Paula, an elementary school art teacher and mother of two, tells me the tests take a big bite out what used to be legitimate learning time. "My classes are directly affected. My curriculum is affected. My classes are cancelled for test prep and they are not made up," she says. This afternoon I was told that I must remove all the student art work hanging in the room, as it 'will be a distraction to the students taking the tests.'"

And, she says, it's changing the way students view their education. "Children are getting the message at a very young age that if you pick the right choice between several options you can be successful. That’s not the way to learn, especially creatively. That's not experimenting or exploring or creating. We're telling kids that that life is a series of hoops and that they need to start jumping through them very early."

Meanwhile, teachers and principals are caught in a hideous bind of having their own teaching methods squeezed out while knowing that, as Paula says, "Millions of dollars of funding and aid for students they genuinely care about are tied up in these test outcomes." Schools that score poorly on the tests wind up slated for closure or downsizing. Is it any wonder that administrators find themselves drawn to acts of intimidation and cheating? No wonder, too, that New York teacher Gerald "Jerry" Conti went viral earlier this month when he wrote a letter of resignation in which he spoke for plenty of other educators, lamenting, "'Data driven' education seeks only conformity, standardization, testing and a zombie-like adherence to the shallow and generic Common Core, along with a lockstep of oversimplified so-called Essential Learnings. Creativity, academic freedom, teacher autonomy, experimentation and innovation are being stifled... In their pursuit of Federal tax dollars, our legislators have failed us by selling children out to private industries such as Pearson Education... I am not leaving my profession, in truth, it has left me."

And it's a system that, as Core Standards are being implemented around the country, seems built to fail. "All the passing ratings are going to go down about 30 percent this year; that’s what they're predicting," says author, advocate and education historian Diane Ravitch. "The dark view is that they want everybody to fail and they want people to say the public schools stink, so they can push for more vouchers and more charters. I can't describe what's going on without thinking that we're in the process of destroying American public education."

How'd we wind up in this mess? Ravitch says it started back in 2000 with George W. Bush, and his so-called "Texas Miracle" --  the promise that standardized testing had revolutionized his home state and closed the achievement gap. It's what led to the implementation of No Child Left Behind when he because president, and Obama's subsequent Race to the Top – a program Ravitch describes as even "worse" than NCLB. And you've got to wonder, if Texas had truly be so miraculous, would it now be the epicenter of a powerful anti-testing backlash? Ravitch is not opposed to diagnostics – nor, for that matter are any of the teachers I spoke with. She explains, "The test should be designed by the teachers, and kids should be tested based on what they're taught. Instead, the test makers are telling educators what to teach -- and that’s backwards. All of this is a terrible distortion of education." Or as my friend Blair puts it, "This is random. The test is created by somebody far away. It's very shallow and it doesn’t measure higher order thinking."

My seventh- and third-grade daughters are both enrolled in wonderful public schools – schools that just happen to exist within a system in which children's academic opportunities, their teachers' careers, and the viability of their schools themselves increasingly boil down to six nail-biting, test-taking days in the spring. Which is, by any way you want to quantify it, insane. Ultimately, the only clear-cut winners in the high stakes assessment game are publishers like Pearson, which two years ago won a $32 million contract to write the tests.

Two years ago, educator Will Logan wrote that "a culture of schooling that feels the need to pump up students for test-taking with chanting and dancing… makes me actually shudder as a parent." And he added, with great economy and perception, that "If all we want for our kids is to pass the test, we really don't need schools any longer." It should be obvious that if we have reached the point where kids are so anxious that their schools are pumping them full of canned esprit de corps tactics, there's a real problem there. The solution isn't rallies and funny songs. It's looking directly at the source of that brutal, academic year-gobbling problem itself. And then doing things differently.

Absolutely, there are broken schools and faulty teachers who are failing our children every day. But building a better system of public education – an education to which every child in this country is entitled -- takes creative and innovative approaches, tailored to individual communities. Learning is not a one size fits all proposition. And our kids and our schools shouldn't have their whole futures riding on how well children can fill in little circles, to be scored by machines. As Blair says, "We are exchanging authentic, age-appropriate learning – real thinking learning – for test taking. It makes me want to scream."