The blast, which sent flames shooting into the sky, occurred outside of Waco, Tx., at 7 p.m. Wednesday night 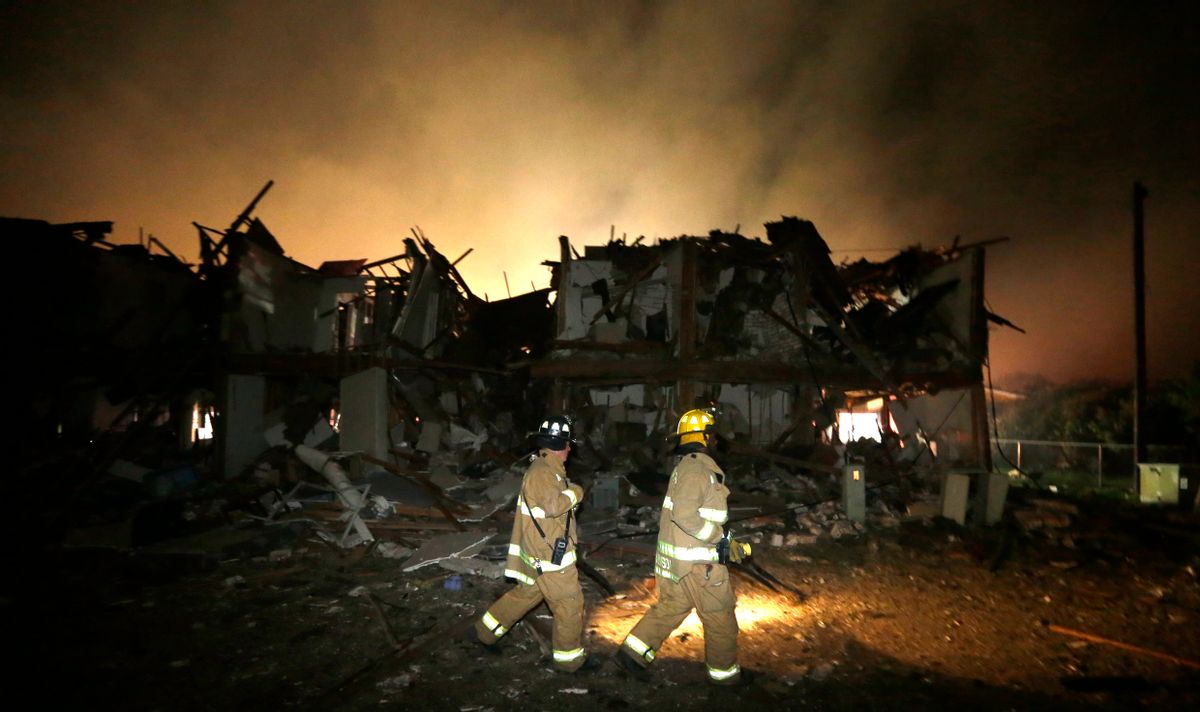 WEST, Texas (AP) — A massive explosion at a fertilizer plant near Waco on Wednesday injured dozens of people and killed an unknown number of others, leaving the factory a smoldering ruin and leveling buildings for blocks in every direction.

The explosion at West Fertilizer in downtown West, a community about 20 miles north of Waco, happened around 7 p.m. and could be heard as far away as Waxahachie, 45 miles to the north. It sent flames shooting high into the night sky and rained burning embers, shrapnel and debris down on shocked and frightened residents.

A member of the city council, Al Vanek, said a four-block area around the explosion was "totally decimated." Other witnesses compared the scene to that of the 1995 Oklahoma City bombing, and authorities said the plant made materials similar to that used to fuel the bomb that tore apart that city's Murrah Federal Building.

Although authorities said it will be some time before they know the full extent of the loss of life, Texas Department of Public Safety spokesman D.L. Wilson said just after midnight that an unknown number of people had died and more than 100 were injured.

West Mayor Tommy Muska told reporters that his city of about 2,800 residents needs "your prayers." A search for survivors continued throughout the night, as emergency workers went house to house and business to business looking for people trapped in the rubble.

"We've got a lot of people who are hurt, and there's a lot of people, I'm sure, who aren't gonna be here tomorrow," Muska said. "We're gonna search for everybody. We're gonna make sure everybody's accounted for. That's the most important thing right now."

The town's volunteer firefighters responded to a call at the plant about 6 p.m., said Waco police Sgt. William Patrick Swanton. Muska was among them, and he and his colleagues were working to evacuate the area around the plant when the blast followed about 50 minutes later. Muska said it knocked off his fire helmet and blew out the doors and windows of his nearby home.

Five or six volunteer firefighters were at the plant fire when the explosion happened, Muska said, and not all have been accounted for.

The main fire was under control as of 11 p.m., Wilson said, but residents were urged to remain indoors because of the threat of new explosions or leaks of ammonia from the plant's ruins.

Speaking to reporters around 2 a.m., Swanton said authorities did not yet know if the fire and the subsequent explosion was an accident or intentionally set.

Dozens of emergency vehicles amassed at the scene in the hours after the blast, as fires continued to smolder in the ruins of the plant and in several surrounding buildings. Aerial footage showed injured people being treated on the flood-lit football field that had been turned into a staging area.

Vanek said first-responders treated victims at about half a dozen sites, and he saw several injured residents from the nursing home being treated at the community center. Swanton said early Thursday morning the injured were being taken to hospitals in Waco and a triage center at high school in nearby Abbott.

Glenn A. Robinson, the chief executive of Hillcrest Baptist Medical Center in Waco, told the Waco Tribune-Herald the hospital had treated more than 100 people, including 14 who would likely be admitted, but that none had died. He said the injuries included cuts, broken bones and others expected from flying debris. The hospital has set up a hotline for families of the victims to get information, he said.

Robinson told the paper 30 people were also treated at Providence Hospital in Waco, and several others were sent to the burn unit at Parkland Memorial Hospital in Dallas. Two children were taken to McLane Children's Hospital in Temple, he said.

Among the damaged buildings were 50 to 75 houses, an apartment complex with about 50 units that Wilson said was reduced to "a skeleton," a middle school and the West Rest Haven Nursing Home, from which first-responders evacuated 133 patients, some in wheelchairs.

"We did get there and got that taken care of," Muska said of the nursing home evacuation.

Erick Perez, 21, of West, was playing basketball at a nearby school when the fire started. He and his friends thought nothing of it at first, but about a half-hour later, the smoke changed color. The blast threw him, his nephew and others to the ground and showered the area with hot embers, shrapnel and debris.

"The explosion was like nothing I've ever seen before," Perez said. "This town is hurt really bad."

Debby Marak told the AP that when she finished teaching her religion class Wednesday night, she noticed a lot of smoke in the area across town near the plant. She said she drove over to see what was happening, and that when she got there, two boys came running toward her screaming that the authorities had ordered everyone out because the plant was going to explode.

She said she had driven only about a block when it did.

"It was like being in a tornado," Marak, 58, said in a phone interview. "Stuff was flying everywhere. It blew out my windshield."

She called her husband and asked him to come get her. When they got to their home about two miles south of town, her husband told her what he'd seen: a huge fireball that rose like "a mushroom cloud."

The explosion knocked out power and could be heard and felt for miles around. Lydia Zimmerman told KWTX-TV that she, her husband and daughter were in their garden in Bynum, 13 miles from West, when they heard multiple blasts.

"It sounded like three bombs going off very close to us," she said.

Information was hard to come by in the hours after the blast, and entry into the town was slow-going as the roads were jammed with emergency vehicles rushing in to help. Texas Gov. Rick Perry said state officials were among those waiting for details about the extent of the damage.

Lucy Nashed, a spokesman for Perry's office, said personnel from several agencies were en route to West or already there, including the Texas Commission for Environmental Quality, the state's emergency management department and an incident management team. Also responding is the state's top urban search and rescue team, the state health department and mobile medical units.

The U.S. Chemical Safety Board said it was deploying a large investigation team to West. American Red Cross crews from across Texas also headed to the scene. Red Cross spokeswoman Anita Foster said the group was working with emergency management officials in West to find a safe shelter for residents displaced from their homes.

Swanton said he had no details on the number of people who work at the plant, which was cited by the Texas Commission on Environmental Quality in 2006 for failing to obtain or to qualify for a permit. The agency acted after receiving a complaint in June of that year of a strong ammonia smell.

In 2001, an explosion at a chemical and fertilizer plant killed 31 people and injured more than 2,000 in Toulouse, France. The blast occurred in a hangar containing 300 tons of ammonium nitrate, which can be used for both fertilizer and explosives. The explosion came 10 days after the Sept. 11, 2001, terrorist attacks in the U.S., and raised fears at the time it was linked. A 2006 report blamed the blast on negligence.

Blaney reported from Lubbock. Associated Press writers Schuyler Dixon and Terry Wallace in Dallas, and Michael Brick in West contributed to this report.