Chechen terrorism: What you need to know 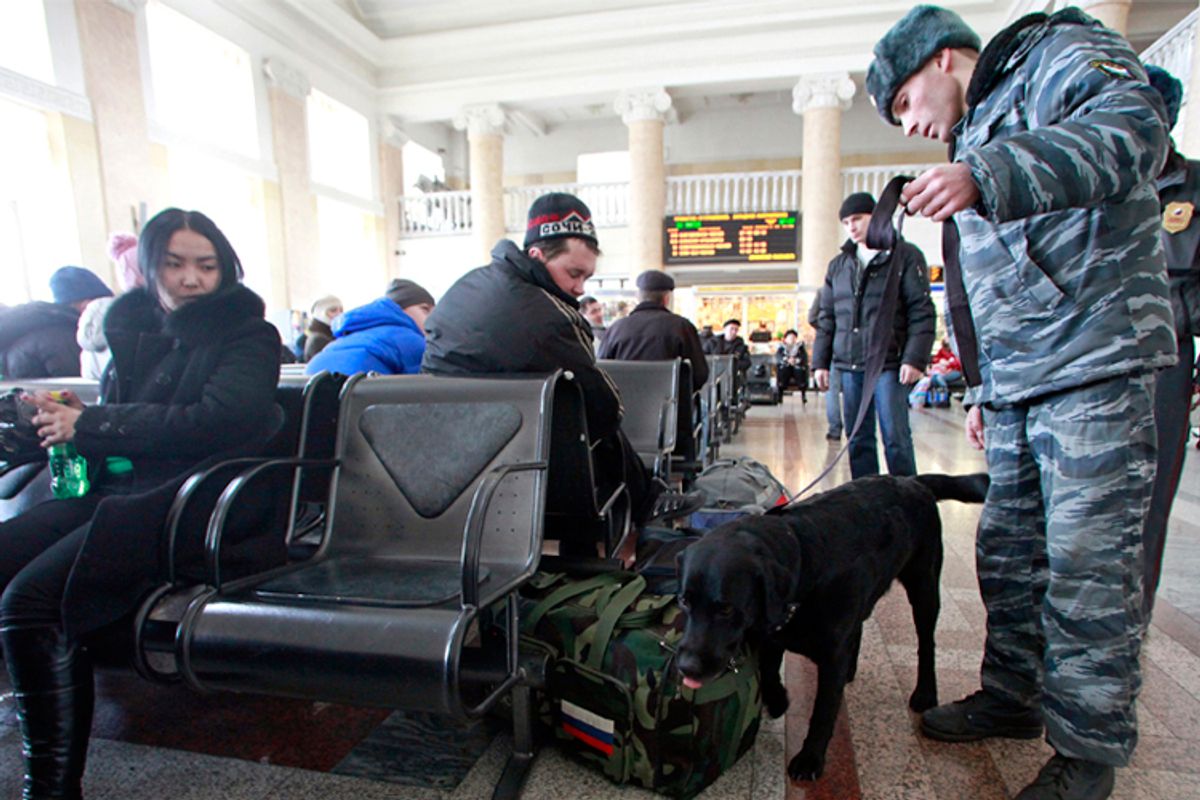 Police check luggages for explosives at railway station in Krasnoyarsk, March 31, 2010. Authorities said the blasts were linked to the North Caucasus - a string of heavily Muslim provinces that includes Chechnya (Reuters/Ilya Naymushin)
--

After a dramatic night that included a shootout, the murder of a police officer and the death of one of the two suspects in the Boston Marathon bombing, authorities are on the hunt for remaining suspect, whom the AP identified as Dzhokhar A. Tsarnaev, a 19-year-old who is reportedly a Chechen national living in Cambridge, Mass., with his brother, the slain second suspect, for the past several years.

It's important to note that the reports of the suspects' nationalities remain unconfirmed; however, they have Chechen surnames and a photo essay reportedly profiling the elder Tsarnaev, Tamerlan, quotes him as saying, "Originally from Chechnya, but living in the United States since five years." Tamerlan says: "I don't have a single American friend, I don't understand them."

Chechen terrorism may be less familiar to most Americans than that carried out by fighters from the Middle East or Afghanistan and Pakistan, but Chechen separatists have fought a long and bloody war against Russia in the region's long war of independence from Moscow.

Chechnya, a small, predominately Muslim region in the Caucuses between Georgia and the Caspian Sea in Southern Russia, has been a hotbed of separatist violence since the start of the first Chechen war in 1994 -- the same year that Tsarnaev was reportedly born. As Joshua Yaffa, a Moscow-based journalist wrote, The "whole generation knows only conflict."

While the Russian military fought a brutal "dirty war" against Islamic fighters in the region that reportedly included extrajudicial disappearances and killings, Islamist terrorists carried out a campaign of terror and violence against innocent Russian civilians all over the country.

Dokka Umarov, an Islamist Chechen separatist leader, is one of Russia's most wanted men and has earned the name of "Russia's Osama bin Laden" for his involvement in numerous attacks. Al-Qaida has also been loosely tied to Chechen terror groups.

Violence has calmed more recently and Chechnya has seen rapid economic growth. Moscow officially ended its counterterrorism operations in the region in 2009.

In 2001, three Chechens hijacked a Russian airline with 174 people onboard and forced it to land in Saudi Arabia, where commandos stormed the plane and freed more than 100 hostages.

In 2002, some 50 Chechen militants seized a theater in Moscow, taking 850 hostages and demanding the withdrawal of Russian forces from their region. At least 130 hostages died when Russian authorities pumped in knock-out gas in an attempt to drive out the terrorists, but ended up killing civilians as well.

In early September 2004, militants sent by Chechen separatist leader Shamil Basayev took over a grade school in a nearby autonomous region of Russia. After three days and a botched raid by Russian forces, at least 385 were killed and over 700 wounded, including numerous children.

In 2010, at least 40 people were killed and 100 injured when terrorists bombed two Moscow Metro stations.

For more, check out this Council on Foreign Relations primer on separatist violence and terror in Chechnya.