Pick of the week: Witty, spectacular and full of twists, "Oblivion" conjures up many of the genre's greatest hits 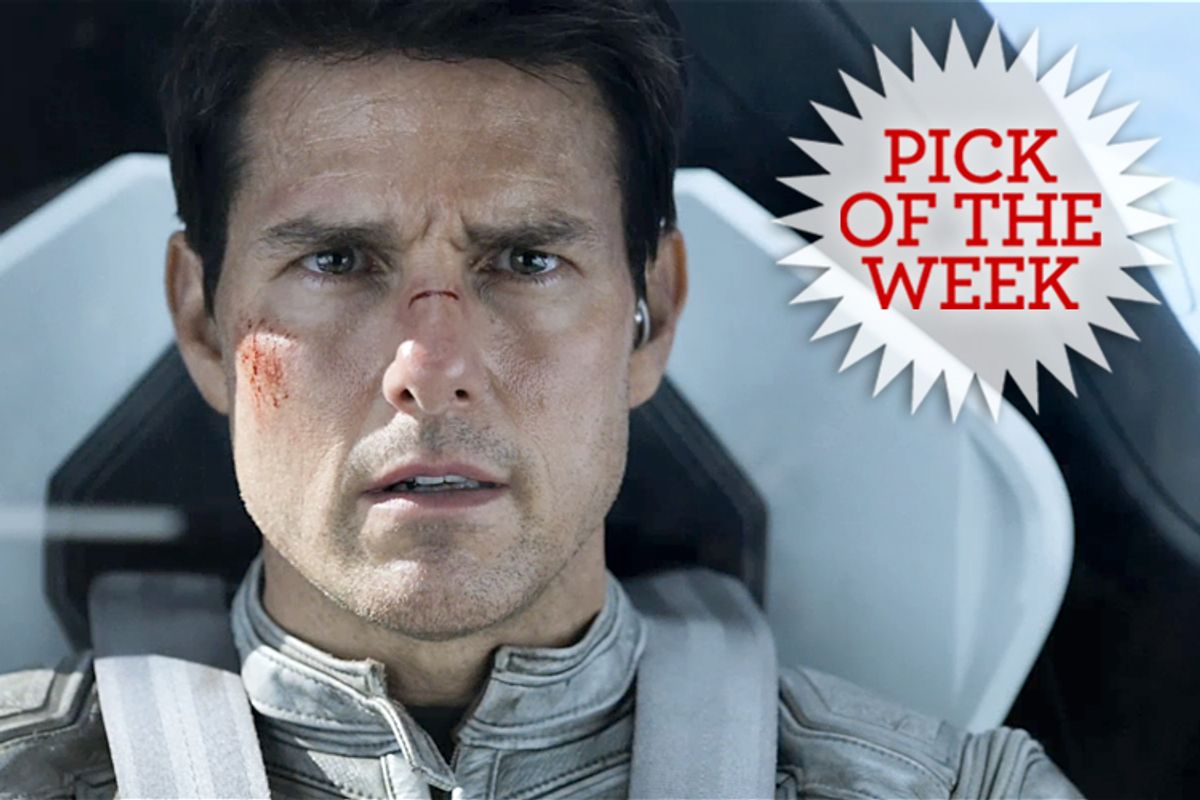 Science fiction is always more about the present, and even the past, than it is about the future, which by definition we don’t know anything about. That’s certainly true of “Oblivion,” the sly, surprising and visually magnificent Tom Cruise vehicle that has forced me – and many other people, I suspect – to revise my first opinion of director Joseph Kosinski. In fact, on some bizarre level “Oblivion” feels like a more grown-up and vastly improved version of Kosinski’s murky and ludicrous “TRON: Legacy,” a movie I compared to sticking your head into a barrel of ink full of fluorescent glow-sticks.

Like that movie, “Oblivion” incorporates all sorts of themes, ideas and images from science-fiction cinema of the last several decades, including “Blade Runner,” “The Matrix,” “Total Recall,” “2001: A Space Odyssey” and Andrei Tarkovsky’s “Solaris,” among others. It explores nearly the same territory of loss, loneliness and rediscovery, but the philosophical veneer and the reverent design aesthetic fit a whole lot better when the whole story doesn’t take place inside a 1980s video game. I’m sure some people will see “Oblivion” as another Philip K. Dick rehash -- to be clear, it's not based on any of his material -- but to my mind Kosinski and co-writers Karl Gajdusek and Michael Arndt have synthesized all these influences into a witty and elegant post-apocalyptic parable that’s well suited to our age of asymmetrical warfare and even asymmetrical reality. (One could indeed steer a discussion of “Oblivion” toward a discussion of the limits of political knowledge and global understanding – but not before you’ve seen the movie.)

We begin on, or just above, the surface of an abandoned and nearly dead planet, which happens to be our beloved third rock from the sun. It’s the 2070s, and Jack (Cruise), our hero, explains in an opening voice-over that some years earlier the human race fought a total war against an alien race known as the Scavs. These invaders had first blown up the Moon – and indeed we can see it, a horizontal streak of rubble across the sky -- wreaking havoc with the tides and immensely destructive changes in the climate. While the Scav invasion was eventually repelled, the victory required the use of most of Earth’s nuclear arsenal, leaving most of the planet uninhabitable. Most surviving humans have apparently been airlifted to a gigantic triangular spacecraft called the Tet, where they await evacuation to Titan, Saturn’s largest moon, to begin a new civilization.

Jack and Victoria (the chilly, leggy Andrea Riseborough), who’s both his co-worker and his sexual partner, are technicians posted to a sleek, chic sky-pod that doubles as command center and living quarters – think Le Corbusier plus a 1979 layout from Architectural Digest plus Playboy magazine – mounted on a pole a few hundred meters above the Earth’s surface. They’re only there on a short-term assignment, mostly to monitor and repair the drones who hunt down bands of surviving Scavs and protect the giant nuclear reactors that suck up seawater and send power to the Tet. Victoria and Jack both know they’ve had their previous memories wiped, so that if they’re captured by the Scavs they can’t reveal any important operating info about the Tet. But Jack has started having peculiar dreams and fragments of memory, seemingly from a prewar Earth society he isn’t old enough to remember.

So we know from the very first scene that something’s wrong with this picture. But Kosinski takes his time with this resplendent vision of massive desolation and isolated luxury, slowly building an atmosphere of menace, uncertainty and even sadness. Even aspects of the film that seem arbitrary or poorly thought-out (why does Victoria get dolled up in skirt and heels to man a communications console?) come into focus eventually. As Jack patrols the awe-inspiring and sometimes heartbreaking landscape of a devastated planet – which recalls the “Planet of the Apes” movies, to be sure, but also Stephen Vincent Benét’s classic short story “By the Waters of Babylon” – “Oblivion” veers awfully close to the contemplative mode, especially for a Hollywood spectacle that reportedly cost more than $100 million. I mean that as high praise, and Claudio Miranda’s photography and the magnificent retro-moderne production design of Darren Gilford are well worth contemplation. But it’s likely some viewers will become impatient for the plot to kick into gear and the action scenes to cut loose.

In due course, they do – but there’s a limited amount I can tell you about that. Adapting his own graphic novel (originally written with Arvid Nelson), Kosinski handles the flow of information in “Oblivion” with confidence. We realize from the outset that Jack’s dreams and memories reflect some underlying reality, and that he and Victoria don’t understand the whole story of the Tet and the Scavs and the war. And it’s obvious that Sally (Melissa Leo), the chatty-bossy hardass Southern belle who talks to them from the Tet, knows a great deal more than she’s telling them. Still, even after Jack rescues Julia (Olga Kurylenko), the lone survivor of a crashed spacecraft whose crew has been in suspended animation for decades, and learns some surprising facts about her mission, you still won’t put it all together.

Since every poster for this movie has Morgan Freeman in it, I’m probably OK saying that he and Nikolaj Coster-Waldau (of “Game of Thrones”) show up as the leaders of a renegade band of humans – and that they and Julia aren’t the only living people Jack finds on the planet. If a lot of the second half of “Oblivion” is fairly standard action cinema – a guy and a girl, on the run and looking for answers – their setting and situation is always visually striking. Whatever you make of Tom Cruise as a person or personality, he has a sharp eye for material and understands his own limits; in the last couple of years he’s homed in on playing the iconic Troubled Guy Who Knows Too Much. This is at least the third strong Cruise performance in a row, after “Mission: Impossible – Ghost Protocol” and “Jack Reacher” (hell, let’s throw in “Knight and Day,” even though it wasn’t a hit).

Is it possible or plausible that the metaphorical, David vs. Goliath level of “Oblivion” will strike some deep cultural and political chord, the way the Wachowskis did in 1999 with the first “Matrix”? Not really – that layer of the movie is in there, for those who yearn for it, but “Oblivion” is a much cooler movie, temperature-wise, not bursting with ideas in quite the same way and much more a visual tribute to the world of Tarkovsky and R.W. Fassbinder. “Oblivion” is a technical triumph rather than a philosophical breakthrough, demonstrating how beautifully digital effects can be blended with real people and real sets, demonstrating that neither Tom Cruise nor the 1970s will ever die, and announcing the unexpected arrival of a major science-fiction director.