Beefed-up expenditures and laws failed to stop the Boston bombing, and did little to help capture the suspects 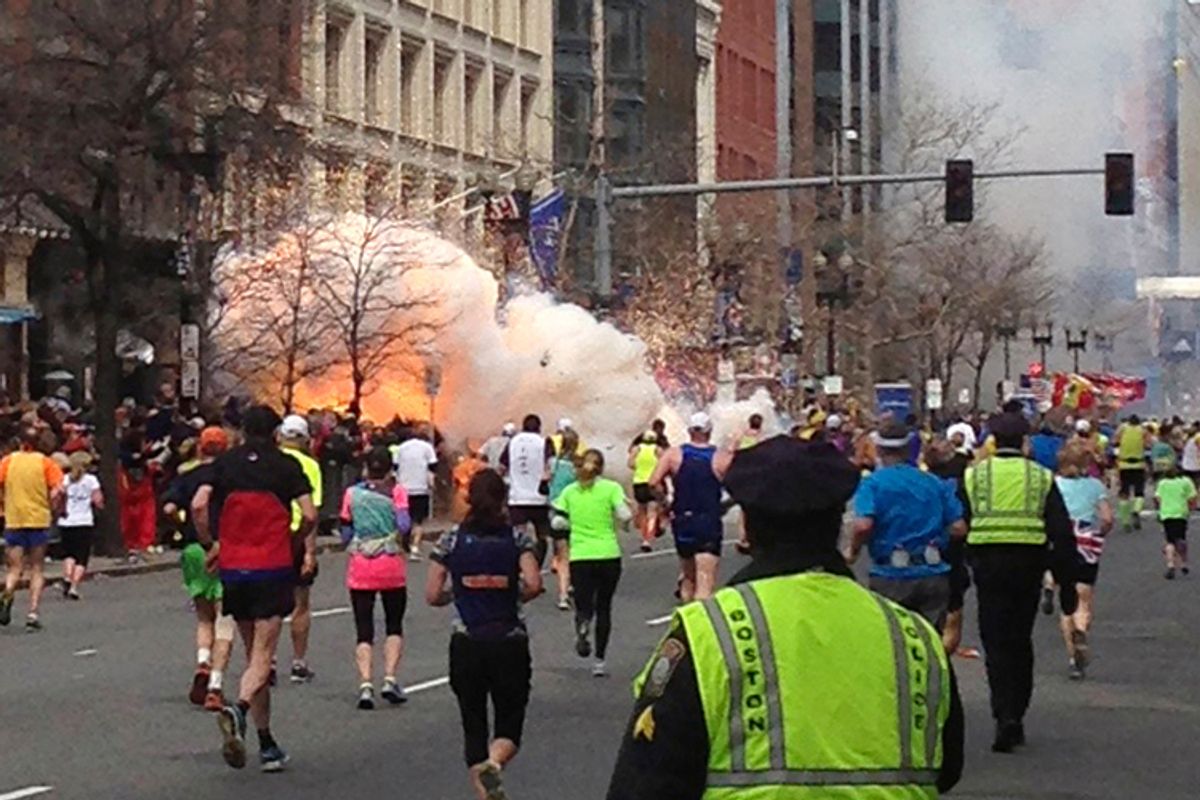 The subtext of the official state view and media coverage coming out of Boston over the last week carried a crucial message to the American public: It was a vindication of the Counter-Terrorism Surveillance State and its massive expenditures and the associated erosion of American constitutional liberties.

To that end, the several days since the bombing of the Boston Marathon showcased a mesmerizing display of reality television mediated by the unquestioning officiousness of the fourth estate. On vivid display was “proof through performance,” a validation that the laws passed and massive expenditures incurred over the last decade were essential to the state’s “protection of the public.”

Multiple banners flashed across the scene with short, exciting spins about the status of the manhunt for the bombing suspects; they were accompanied by endlessly repeated images of Boston and Watertown police, SWAT teams and FBI officers, all carrying a dazzling array of complicated weapons, bordered by police cars. There wasn’t a civilian in sight, since they all appeared to have accepted the "command" (which was in fact a request) to stay inside. These images alternated with breathless images of reporters "at the scene," filibustering inanely, occasionally offering proud announcements about how they were asked to "move back" as the focus of the police search for the suspects shifted. It was as if they were children proudly reporting how they were asked by their teacher to help clean the blackboards.

The past decade has seen presidents, politicians -- conservatives and liberals alike -- champion preemptive policing laws such as the USA Patriot Act, FISA, NDAA 2012 and 2013, to Transportation Security Administration security practices and searches, to “See Something, Say Something” practices — all in service to fighting the War on Terror. As a cable-news talking head cooed Friday morning: “There are cameras and social media everywhere. There is nowhere to hide!” That statement seemed indisputable: store cameras, street cameras, private cellphone cameras and videos could be integrated to give an astonishingly wide record of the tens of thousands of people who were at last Monday’s event. Yet, the most important truth of that day seemed to be lost in the gush of self-congratulation: The explosion of the bombs confirmed that a massive extension of the surveillance-state did not protect people in Boston.

Remarkably, this message of the paramilitarized surveillance state was in no way challenged merely because it was inaccurate. By the time Massachusetts Gov. Deval Patrick ended the “shelter in place” request, the second suspect had still not been found. Suddenly, the Boston public was supposed to believe that they were magically safer after the lockdown ended than before. But lest one come to conclude that this suggested a failure of the militant and closely watchful surveillance state, Rachel Maddow, Erin Burnett and other cable news heads happily rushed to its vindication by triumphantly exclaiming the insightful fruits of the years-long “See Something, Say Something” campaign by the Department of Homeland Security.

The rough description that the media had in common was this: A guy walked out to his boat to smoke a cigarette, saw something moving, and lifted the tarp — only to find the injured suspect. At which point, he retreated and called the police! Would the boat owner have acted differently prior to the “See Something, Say Something” campaign? Never mind.

Indeed, the vaunted magic of (decades-old) infrared technology, increased surveillance, and the absence of restraints on law enforcement, of this massive martial state could all be justified through the lens of the state itself, a breathless and supine media, and an ostensibly cowering but now relieved public. Yeah! The War on Terror is so successful! See?

But the show did not end there. As Erin Burnett crowed: “They took him alive! This proves that there is justice in America! Innocent till proven guilty.” Despite its nonsensical meaning, this oblique message was reiterated by the president, who cautioned us against a “rush to judgment” — certainly about groups of people. Apparently, “[t]hat’s why we have courts.”  Hmmm. That’s going to be news to some folks still languishing in Cuba.

Not to be outdone by an illusory call for order by a president who has supported multiple renewals of FISA and pressured the Senate into approving an expansion of executive power to arrest and detain any suspected terrorist (U.S. citizen or foreign national) anywhere in the world (in NDAA 2012 and 2013), Sen. Lindsey Graham insisted that we were seeing proof that the homeland was the battlefield. And indeed, it’s hard to disagree with him — even if one is critical. Moreover, according to Graham and Sen. McCain, even a 19-year-old naturalized citizen (vaguely fingered as Chechnyan and Muslim) can and should be treated as an enemy combatant.

What further cements this view of the Homeland as a Battlefield is the public, collective and casual insistence that a 19-year old should not be read his Miranda rights — because an asserted “public safety exception” can be invoked in view of the fact that other IED’s or pressure-cooker bombs might have been set. With this, we are halfway to Alan Dershowitz’ favored fantasy: next, let’s torture him -- because we "know" a bomb might be set somewhere by him that threatens to hurt Americans. However, shockingly, even Dershowitz refuses to be fear-mongered, arguing instead that the only logical outcome was a civilian trial, insisting that “it's not even clear under the federal terrorism statute that this qualifies as an act of terrorism.”

Moreover, there was nearly no element of the recently reinforced surveillance state that contributed to the capture or killing these two suspects. As an example, let’s assume every detail of the attack is the same except that it occurred in 1977 (to pick a random date prior to our ubiquitous Counter-Terrorism surveillance state; remember how we used to have “bad guys” before September 11?). If the “bad guys” had put together such a plan in 1977, would events have unfolded any differently?  Would there have been a lot of photography at the finish line of such a prominent public event? Yes, although in the pre-digital age, it would have taken a little longer to gather and sort through the pictures. Hence, this aspect of this past week’s outcome can’t be ascribed to the massive expenditures and “federalization” of “homeland security,” but rather to a change in consumer electronics.

Would the two brothers have been flushed out by the police response to a nearby and unrelated robbery that led to the tragic shooting of a MIT police officer, the carjacking and ensuing chase that ended with the shootout in Watertown?  It is hard to credit this sequence of events, which were initiated by a mere coincidence, to the success of the modern surveillance state. Would the initial shootout in Watertown, the escape of one of the brothers, and the eventual spotting of blood on the side of a boat and the calling in of that observation have unfolded in more or less the same way in 1977?  Probably.

Where is the added value? In what way have the massive expenditures, intrusive surveillance practices, and stripping away of our liberties been vindicated by the events of this past week? In fact, no one can truthfully say “Aha!  This is where these new practices have made a difference! Thank goodness George W. Bush and Barack Obama have so little regard for the American Constitution or everything would have really gone badly at that particular point in these events.”

What we witnessed was a tragic -- but sadly – too familiar sequence of events. In a nation of over 340 million, we have a few demented or damaged souls with real or imagined grievances that cause them to wish to harm people whom they do not know. We also have good, brave, and competent local and state police forces that are able and willing to solve these crimes. It was true back in 1977 (and long before), and remains true today.

So what in fact did change? We now have a “War on Terror” that permeates every public news event and action. The immediate leap to the familiar “Terrorists In Our Midst” narrative is facilitated and amplified by a bovine mainstream media amped up by endless alerts issued by a Department of Homeland Security and two Presidential Administrations about insane foreigners here, there, and everywhere. In other words, what’s changed is the presence of a fear-mongering narrative of the War on Terror, along with the billions in expenditures that are used to justify it, that reframe a centuries old story about crime.

Robert E. Prasch is Professor of Economics at Middlebury College.