How the Tsarnaevs might affect the gun control debate

Did they get their guns from the black market, online, a gun show, or a private sale in a neighboring state? 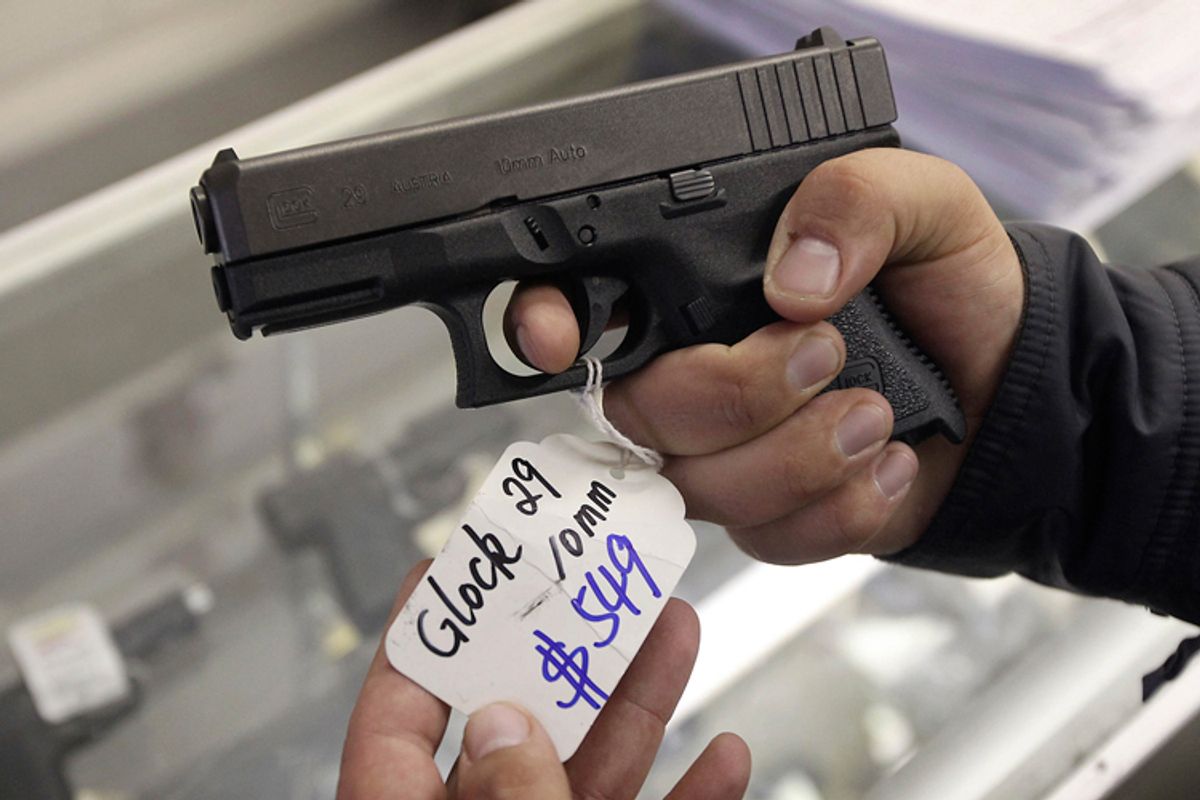 What began with two homemade bombs planted at the Boston Marathon ended after an extended shootout, when bombing suspects Dzhokhar and Tamerlan Tsarnaev used handguns and a rifle to fight a running battle with police across several Massachusetts towns, leaving one officer dead and another severely wounded.

But police in the state tell Reuters and the AP that neither brother had the permits required to carry a firearm in Massachusetts, which has some of the strictest gun laws in the country.

This isn't particularly surprising, since both brothers may have had trouble buying a gun from a federally licensed firearms dealer. Younger brother Dzhokhar is 19, but federal law prohibits dealers from selling handguns to someone under the age of 21. Older brother Tamerlan was arrested for domestic violence in 2009 and if he was convicted (reports conflict at the moment), he would be prohibited from purchasing any kind of firearm from a dealer.

And yet they obviously did have weapons, so where did they get them? The answer to that question could have a big impact on the smoldering gun control debate in Washington.

One possibility, of course, is the black market. If this turns out to be the case, the National Rifle Association and its compatriots will likely take it as further evidence for their argument that gun laws are worthless because criminals won't follow them.

But David Chipman, a former Special Agent at the Bureau of Alcohol, Tobacco, and Firearms, thinks it's "unlikely" the brothers purchased guns off the street. The black market for guns is dominated by drug dealers and urban gangsters, and there's no indication the brothers had any connections in that world, so it'd probably be easier for them to buy guns via non-regulated private sales.

"Why go into a dark alley and buy a stolen gun from a drug dealer when you can go to the 'GunShow that never ends,' as Armslist was described by its owner," Chipman, now a senior advisor to Mayors Against Illegal Guns, told Salon. Indeed, Armslist, an online marketplace for weapons, lists plenty of options in Massachusetts, including semi-automatic handguns and assault-type rifles for under $500. They could have also used Craigslist or classified ads in newspapers or magazines, or visited a gun show or flea market. None of those types of sales would require a background check. Though private sellers are supposed to check that a purchaser has a license, there no enforcement mechanism and advocates have found plenty of evidence of private sellers looking the other way.

These kinds of private sales are precisely the issue the bill that died in the Senate last week intended to regulate, by ensuring that background checks get performed before almost all stranger-to-stranger gun sales. A national survey of inmates indicated that nearly 80 percent of those who had used a handgun in a crime had acquired it through a transaction with an individual who was not a licensed gun dealer

And while Massachusetts has strict gun laws, other nearby states like New Hampshire, Maine, and Vermont, have some of the weakest, which could have allowed the brothers to legally purchase guns via private sales in those states. Though they would be in violation of the law when they returned to Massachusetts and failed to obtain permits, that would be almost impossible for police to enforce, underscoring how robust state laws can be undermined by neighbors in the absence of a strong federal system.

If the brothers purchased their guns online, at a gun show, or in another state, gun safety advocates will have a powerful piece of evidence to support their call for universal background checks, possibly even giving them enough momentum to revive the legislative push in Congress. Their argument: The brothers could would have been prevented from purchasing handguns (assuming Tamerlan was in fact convicted on the domestic abuse charge) if such a regime was in place.

But if the brothers purchased their guns on the black market, flouting Massachusetts' unusually strict laws, expect gun advocates like the NRA to claim vindication in their argument that gun control only hinders law-abiding citizens and does nothing to stop crime, leaving the gun bill as dead as it is now.

UPDATE: CNN reported yesterday that while the brothers purchased the materials they used to make the bombs in the Boston area, "their guns came from somewhere else," which would suggest out of state.