New Yorkers' newest opportunity to step all over you 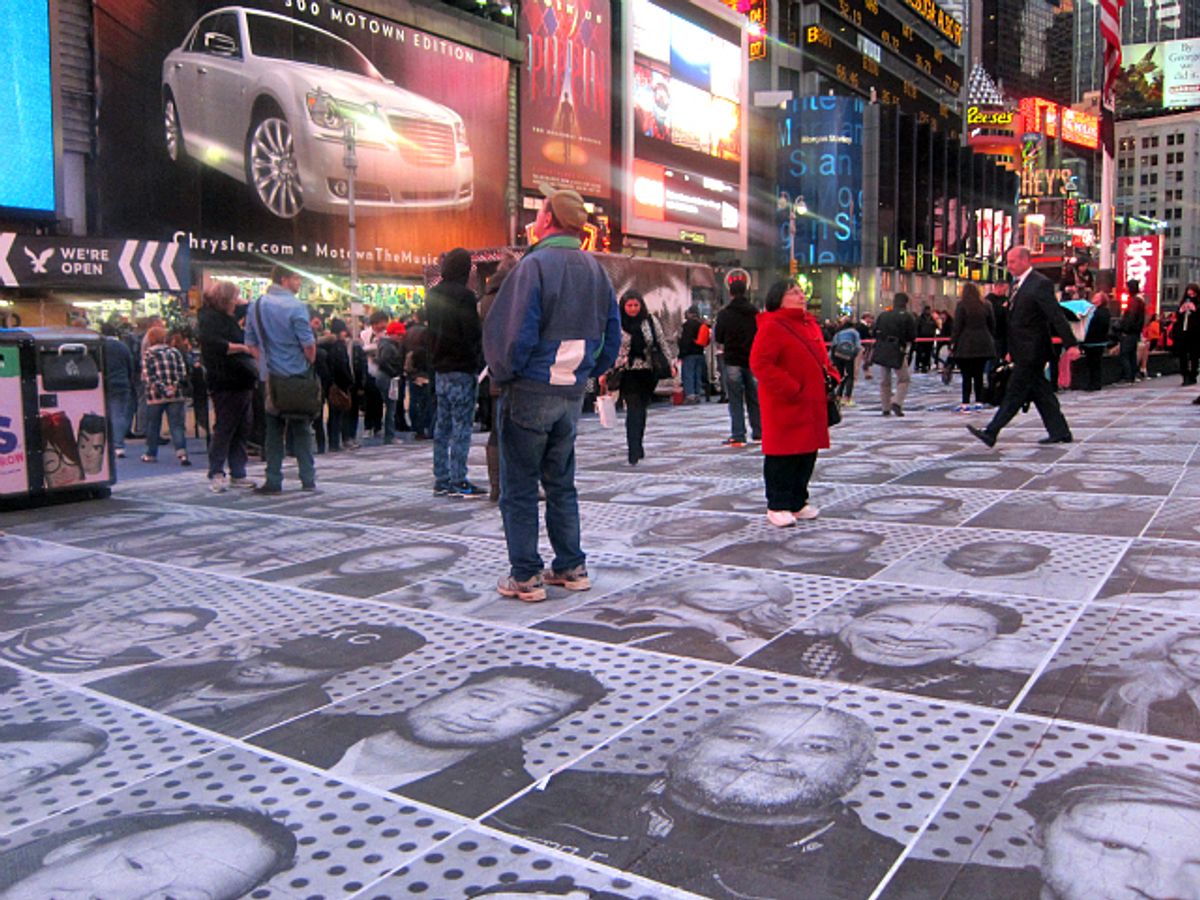 JR's "Inside Out New York City" in Times Square. (Allison Meier via Hyperallergic)
--

In an attempt to show the faces of the New Yorkers and tourists who swiftly move through Times Square at an unrelenting 24-hour pace, French street artist JR has set up a photo booth right in its center. Inside Out New York City, which started last night as part of the Times Square Arts public arts program, is a continuation of JR’s Inside Out Project, where the faces of the people who live in a place are made visible on its structure.

Since he started the project in 2011, he’s been prolific with it, with this idea of using people’s faces as a way of making a connection in disconnected places catching on everywhere from Palestine and Israel to the North Pole. Since arriving in New York a few days ago, he’s been just as busy, with a film on his project, Inside Out: The People’s Art Project, screening at the Tribeca Film Festival, and his roving photo booth (a truck decorated with giant eyes in his signature dot scheme) makings stops around NYC, including the Rockaways where locals got their photos pasted up on the remains of the pier on the beach swept away by Hurricane Sandy, and Red Hook in Brooklyn.

Entering the portrait booth in the truck

As a fun fact, the first modern photo booth was actually on Broadway, showing up in 1925 and allowing visitors to pay for a quick portrait behind a curtain. Now anyone can line up at JR’s photo booth truck for a free 3′ x 4′ poster of themselves against a dotted backdrop, which is pasted on the ground in a sprawling mural of faces. As the project continues through May 10, the mosaic of smiling, scowling, clowning, and staring faces will expand and alter as new images are pasted over the old, so in theory each day the faces you see will all be people who were there just hours, or minutes, before you.

While Inside Out New York City‘s goal to “show the world an inclusive image of New York City” might be hard to do in Times Square, where most people who live here just want to get out as quickly as possible, it is a fun and engaging way to glimpse all the people and their personalities who drift through this small frenetic corner of the world at once.

JR’s “Inside Out New York City” in Times Square, with a cameo by the Statue of Liberty costume up front

JR’s Inside Out New York City is at Duffy Square on Broadway between 46th and 47th streets in Times Square through May 10.