Attention clueless anchormen, sorority girls and Oscar winners: Your careers are at stake when you screw up 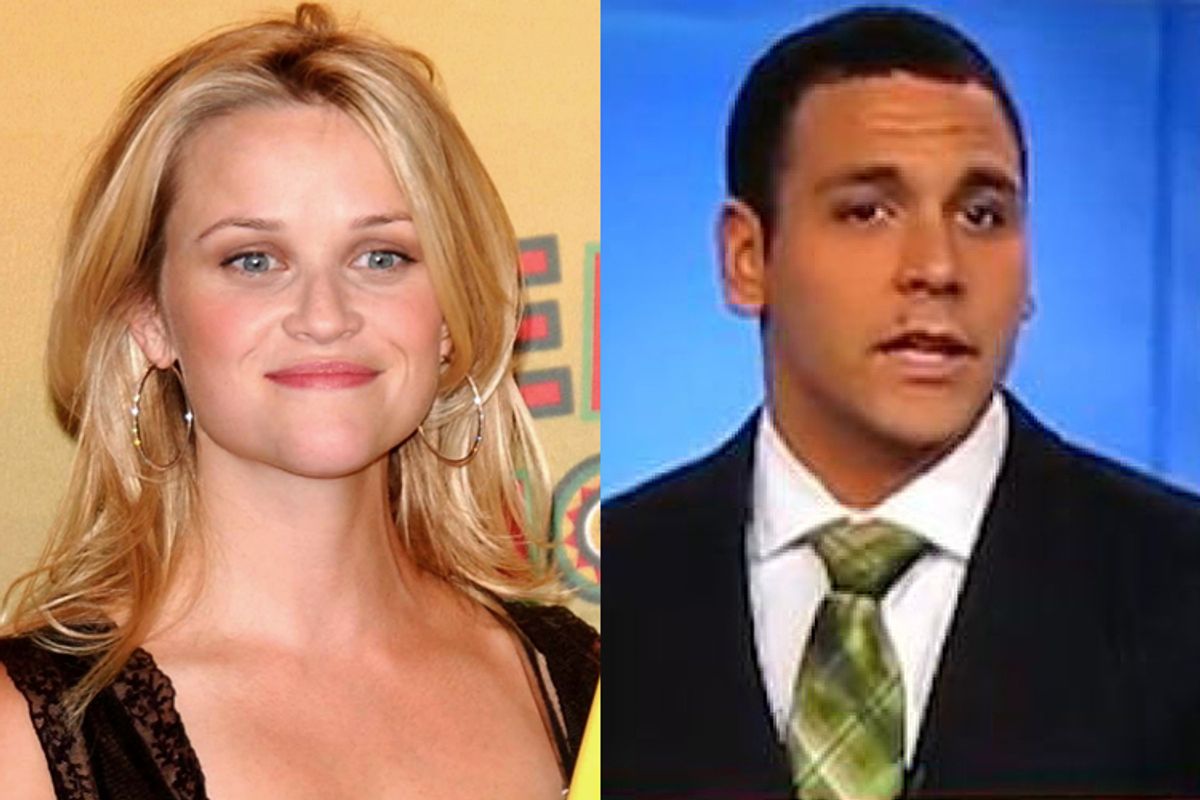 Just to clear up any confusion that you might have, not-terribly-bright person who may from time to time send emails or appear in front of a camera or interact with other humans: The cloak of invisibility is not yet a reality. We can all see and hear and read you here.

We, by the way, are your teachers and employers and future employers and law enforcement officers. But don't take my word for it. Instead, learn from the shining examples of very dumb and very public behavior in just the last few days, and then henceforth, I beg you, pause for just a moment before opening your mouth or hitting the "send" button.

The most recent unfortunate victim of a yawning gap in internal filtering devices is the newly unemployed A.J. Clemente. For about five minutes this weekend, Clemente was a news anchor at KFYR-TV in North Dakota. But in an apparent case of nerves not seen since Albert Brooks perspired his way through the headlines in "Broadcast News," Clemente obliviously kicked off his debut performance by looking downcast and muttering a short string of obscenities. He would later chalk up the mini-meltdown to fear of flubbing the name of London marathon winner Tsegaye Kebede.

Soon after the broadcast, Clemente was breaking the news on Twitter that "That couldn't have gone any worse!" and butt-coveringly retweeting a plea to "#keepaj." It was, however, not to be. By the 10 p.m. broadcast, his co-anchor was riding solo and apologizing for his behavior. By shortly after midnight, he was gone altogether.

Even if, in total noob fashion, you haven't quite figured out when you're live on the air -- Hint: When the red camera light is on and your co-anchor is speaking into it, you are -- it's never a great idea to begin your broadcasting career by cussing in front of your colleagues. You also may not be on the Anderson Cooper trajectory when you follow up your gaffe by introducing yourself to your viewers with the statement that "I'm used to um, you know, from being, from East Coast." And don't practice your Peabody award speech until your Twitter wallpaper is no longer the image of a bunch of old-school mix tapes, including "Music Touched My Vagina." Finally, I might also suggest that when you're referring to returning to your "home state" of "NYC" you may not yet be fully prepared for the exciting field of information dissemination.

But Clemente is going to have slide over and make room on the Big Bench of Bad Decisions this week. Sitting next to him is Oscar winner and America's sweetheart Reese Witherspoon, whose unfortunate response to her husband being pulled over on suspicion of a DUI was a highly misguided attempt to pull rank. It was peculiar enough when she told the police officer that "she was a U.S. citizen" and allowed to "stand on American ground." But where she really forgot herself when she asked the officer, "Do you know my name? You're about to find out who I am ... You are going to be on national news." You've got to hand it to her for calling it correctly, because the whole episode sure as heck was.

On Monday, she issued an apology, stating that she was very sorry and that "I clearly had one drink too many and I am deeply embarrassed about the things I said." Witherspoon does seem to have been acting like a lady who'd gone over her drink limit for the night, but even in the depths of some appletini bender, a woman who's spent half her life in front of the camera ought to know better than play the diva card so blatantly. Even Amanda Bynes knows that you wait an appropriate amount of time before demanding that Barack Obama fire your arresting officer. It makes you wonder if the real reason Witherspoon dropped all her slated media appearances this week immediately was because she didn't trust her own feet to stay free of her mouth.

But Witherspoon's roadside hissy fit was nothing to that of the true star of the hour, the highly opinionated young lady identified as Rebecca Martinson -- better known on the Internet as "Crazy Sorority Girl." In a furious, profanity-crammed screed to her sisters that's both morally reprehensible and yet artistically superior to the poetry of Amanda Palmer, the author suggests her readers "punch yourself in the face right now" for a variety of offenses. Among the more repeatable: sucking, being weird, being sober, being "a little asswipe that stands in the corners at night" and generally being an all-around "goddamn boner."

In case there was any doubt that Becca's probably not the most fully evolved sister in the sorority, her now deleted Twitter stream is a gold mine of her critiques of "pasty flab thighs" girls, "awkward Asians with strange hairstyles," "the Mexicans working along the sidewalk" and Jewish guys at the gym wearing a "yammaca" [sic]. She also, in between expressing "cheers to double penetration," notes that she's close to missing the deadline for applying for internships and that, despite her teamwork credentials of participating in an orgy, she failed a recent job interview. Crazy Sorority Girl, I'm guessing that's not the only job you won't land! It's called Google, and it's not going to be your friend for quite some time. On the bright side, you may have a bright future as a screenwriter – you're more colorful than Mamet, and your letter has already been turned into the greatest performance of Michael Shannon's career.

We all say idiotic things. Not every moment of life can be cautiously curated. We forget that a microphone is on or that emails can be forwarded -- or that berating arresting officers after we've had a few isn't such a hot idea. But if you can make a general practice of not acting like a jerk in a world where said jerkiness is so easily documented, you'll be a smarter person with a few more career prospects. And you will definitely have a higher likelihood of not going viral for being a goddamn boner.