The writer who gave us Megan Fox as an Aztec sacrifice tells us that the Internet needs more civility. Poppycock! 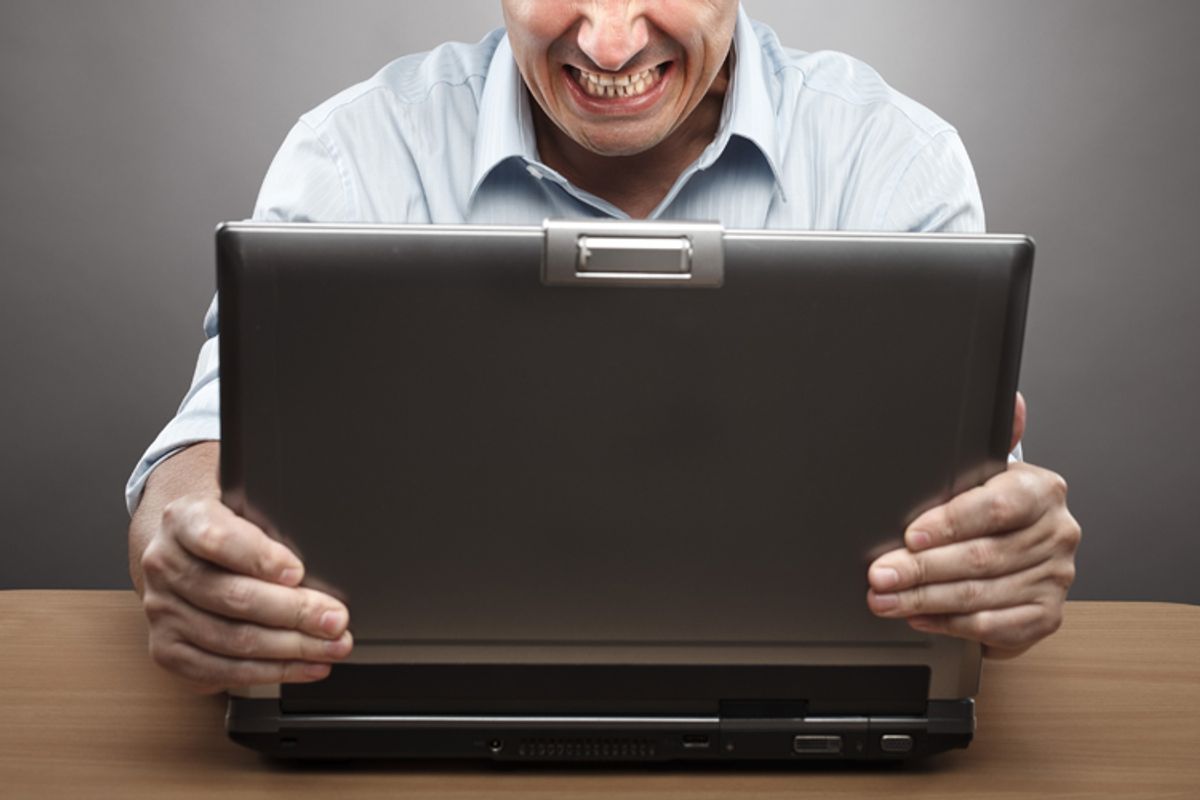 How much do I hate the essay on Internet hatred by Stephen Marche in the May issue of Esquire? Let me count the ways.

1) I hate that Marche makes no mention of his January profile of Megan Fox, a dazzlingly hyperbolic spasm of drool roundly mocked by Internet haters for, among other things, kicking off with a ludicrous Aztec sacrifice parable. ("Megan Fox will not go willingly to have her heart cut out.") It is annoying to get lessons in civility from someone whose current claim to fame is authorship of a terribly written profile about a not particularly interesting sex symbol that was illustrated with titillating photographs of a half-dressed actress.

2) I hate the title: "There Are No Saints Online ... but the Internet will be cleaned up yet." This is incorrect. At least one episode of Roger Moore's classic "The Saint" television series is available on YouTube. Plus, my daughter and mother are both online, and they're very nice people.

3) I hate the first sentence: "The Internet has reached peak hate." Says who, and on what authority? And how could anyone possibly have the chutzpah to publish such a sentence after the week we just lived through, in which hate swirled and roared across the Internet in every possible direction? People have been nasty on the Internet since they first started igniting flame wars in Usenet newsgroups in the 1980s. People will continue to be nasty on the Internet. I hate stories that begin with blanket generalizations that are not supported by any data.

4) I hate that reading this story reminded me of Katie Roiphe's column in Slate whining about mean Internet commenters. Any day that one is reminded of a Katie Roiphe column is a bad day.

5) I hate that when I decided to fact-check Marche's assertion that "the English created the Royal Society to regulate discourse and verify authorial integrity" I found an essay in the Notes and Records of the Royal Society of London titled "The culture of curiosity at The Royal Society in the first half of the eighteenth century." The article makes a a fascinating case that "the appeal to the codes of civility regulating discourse and controversy at The Royal Society" may have been a reaction against the dogmatism and enthusiasm of the Civil War and Interregnum." Furthermore, "the defense of discursive moderation in the practice of natural philosophy in 17th-century England and its relation to gentlemanly codes of behavior" may have played a role in the rise of a "discourse of politeness" in the late 17th and early 18th centuries. I hate it hate it hate it when a mean-spirited fact-check goes completely awry like that.

6) I also hate that I was able to read that article because JSTOR now allows free (albeit limited) access to its online scholarly journal archive, and Aaron Swartz killed himself as a result of being prosecuted on charges that he had tried to steal JSTOR articles. This is not Stephen Marche's fault, but I still hate him for reminding me.

7) I hate that Marche's essay included the line "people say things online they would never say to your face." I'm pretty sure that this has been noted previously. I hate having my time wasted on the Internet.

8) I hate cheap psychoanalysis: "Hate is the crudest means to fellow feeling -- the desire to overcome the alienation that the Internet is so amazing at provoking."

9) I hate that the attack on anonymity -- "pretty soon, the anonymous will be nameless and marginalized even more" -- fails to given even the slightest consideration to the fact that anonymity is a very useful thing in societies where free expression can be dangerous.

10) I hate the invocation of Cicero at the conclusion, attributing to him the rules for polite discourse that people have been following for 2,000 years, and will soon start following again. What would Cicero make of Stephen Marche's Megan Fox profile, or, to cite another recent example, the tawdry tale of a Boston bombing one-night stand published in Esquire just last week? He'd probably think that the barbarian triumph over civilization was complete. He would probably fire off some nasty Tweets.