Dream on. But he has to try: His party and his brother Jeb are hurt by him hiding in shame (UPDATE) 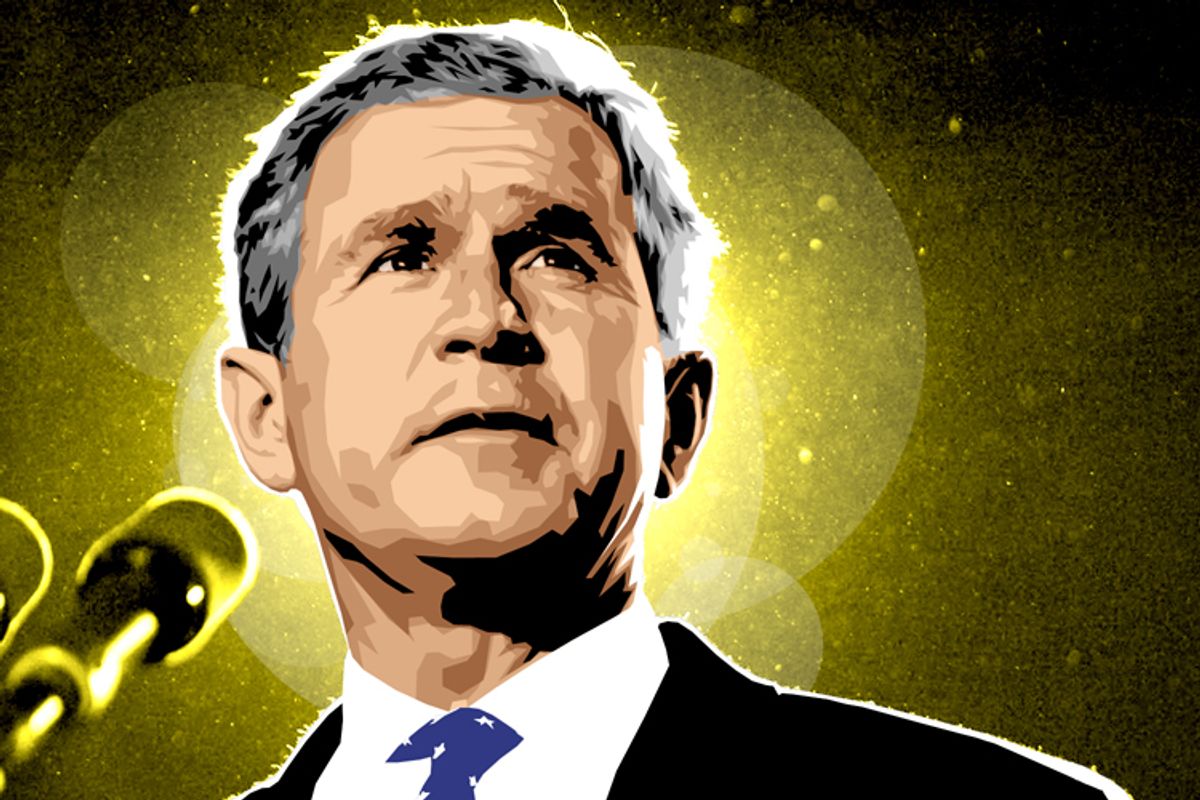 Americans are a forgiving and forgetting people. That’s all that can explain the rise in George W. Bush’s approval ratings since he left office in 2009. Back then, he had the lowest approval rating of any departing president since Richard Nixon (who departed in a helicopter after resigning in disgrace) with a 33 percent overall approval rating. Only 24 percent of Americans approved of his handling of the recession-bound economy. As recently as last November’s election, more voters blamed Bush than President Obama for the country’s ongoing economic woes.

Now, on the eve of the opening of his presidential library and an apparent Bush-rehabilitation tour, starting with a Diane Sawyer interview Wednesday night, Bush faces a kinder, gentler American public. According to a new ABC News/Washington Post poll, Americans are now split on the former president, with 47 percent approving of his performance and 50 percent disapproving. He’s still underwater, as the pollsters say, but that’s not a bad jump in four years. He’s even climbed on the economy, with 43 percent now approving of the job he did, while 57 percent stayed tethered to the reality-based community, and still disapprove.

Bush has even climbed among Democrats: 25 percent approve of the job he did, up from only 6 percent when he left office. (Who says Democrats are haters?)

What’s going on? And will Bush’s comeback tour bump his numbers up even more, which would be some rare good news for the broken, embattled Republican Party?

A few things are clear: This campaign is as much about cleaning up the mess he made for his brother Jeb, who clearly wants to claim his rightful place in the White House, as it is about refurbishing his legacy. Last week Bush told Parade magazine he hopes his brother runs. "I would hope that people would judge [him], if Jeb were to run, on his merits and his track record.…So I hope he will run." The Bush rehabilitation project is something the entire Republican Party needs – as evidenced by the breathless reaction of the party’s top cheerleader, Jennifer Rubin. (I mean no sexism by calling Rubin a cheerleader; her hero Bush was a cheerleader in prep school.)

“Bush is back!” her dopey Washington Post column declared Tuesday.  Here’s a snippet:

It took less than 4 1/2 years of the Obama presidency for President George W. Bush to mount his comeback…Why the shift? Aside from the “memories fade” point, many of his supposed failures are mild compared to the current president (e.g. spending, debt). Unlike Obama’s tenure, there was no successful attack on the homeland after 9/11. People do remember the big stuff — rallying the country after the Twin Towers attack, 7 1/2 years of job growth and prosperity, millions of people saved from AIDS in Africa, a good faith try for immigration reform, education reform and a clear moral compass.

But Rubin’s spin won’t work, and neither will Bush’s rehab tour. He is the worst president in modern history, by any measure. Americans don’t like disliking their presidents, so his recovery was predictable, but Bush’s media tour is likely to provoke a backlash, or at least closer media scrutiny to his record. Or at least it should.

I’ve always felt a tiny bit sorry for Bush. The self-described “black sheep” of his privileged family of compulsive, competitive overachievers, he was never supposed to be president: The honor was meant to go to his smarter, smoother brother Jeb. His favorite job ever, he told us in his autobiography, was being a sporting goods salesman at Sears.

I blamed the worst of his presidency on Vice President Dick Cheney, one of the worst people in the world. I thought his low profile since he left office (compared with Cheney’s brazen attacks on Obama) might reflect self-awareness that he’d been a screw-up, just like his days at his family-funded Arbusto Energy. I even saw an attempt at expiation in his oddly vulnerable self-portraits, several of them in the bathroom or shower no less, at least one featuring his reflection in the mirror. Maybe he was examining his failures and trying to wash away his sins?

No way. Bush is unapologetic in his new round of interviews, telling USA Today, “There's no need to defend myself. I did what I did and ultimately history will judge.” A few years ago, Bush told Bob Woodward he didn’t care about history. “History,” he replied. “We don’t know. We’ll all be dead.” Now he’s counting on his presidential library to shape history’s verdict, calling it “a place to lay out the facts.”  (Oh, and don’t read anything into his painting. "It's mellowing, and there's nothing wrong, particularly for a Type A personality, to mellow out," he also told USA Today.)

The most fascinating feature of Bush’s library may be an interactive exhibit called “Decision Points Theater,” that includes everything from the 2003 Iraq War to Hurricane Katrina in 2005 to the 2008 financial meltdown. It lets visitors assess "the decisions that I had to make and the recommendations I received," he says, and then make their own decisions.

What an oddly passive thing to say, to put the emphasis on “the recommendations I received.” It lets Bush pass the buck, again.

Here are some decision points that belong in "Decision Points Theater," but probably won’t be there.

When he got the Aug. 6, 2001, presidential daily briefing, warning, “Bin Laden determined to strike in the U.S.,” he told the briefer, “All right. You’ve covered your ass,” and then went fishing at his Crawford, Texas, ranch. (That “Type A personality,” by the way, took more vacation than any president in modern history.) Is that what the average Bush Library visitor would have done with such a warning?

After 9/11, he did not tell Americans to go shopping, contrary to popular myth. But he did tell us, “Get down to Disney World in Florida. Take your families and enjoy life, the way we want it to be enjoyed.” He squandered national and international goodwill in the aftermath of the attack, and told us to go to Disney World, while he went ahead with budget-busting tax cuts and put two wars on a credit card, along with a pricey but popular prescription drug benefit for seniors. I’m not sure how “Decision Points Theater” is going to depict that sequence of decision-making.

I wonder if the Hurricane Katrina exhibit will feature the "recommendations" and advice that led him to praise failed FEMA director Michael Brown with his memorable “Heck of a job, Brownie.” Will Bush finally reveal that while he claimed he thought New Orleans had “dodged a bullet” the day after the storm, the White House had actually been informed that the levies had failed and there was massive flooding the night before? Any American visitor to "Decision Points Theater" presented with that information might second-guess the sluggishness of the administration's response to a great city's drowning.

Jennifer Rubin’s crowing about "7 1/2 years of growth and prosperity" under Bush might be the most deluded passage of her delusionary piece. Under Bush, the U.S. experienced the slowest overall rate of economic growth since World War II. Although wages had declined for many groups since the '70s, household income had remained steady, mostly because families sent a second earner into the workplace. But under Bush, household income declined, too, for the first time since the Census Bureau tracked that data in 1967. Almost 22 million jobs were created under the Clinton administration; only 3 million net new jobs were added under Bush, fewer jobs than in any president's two-terms since World War II.

Labor force participation had reached an all-time high in 2000 under Clinton; it dropped steadily under Bush. Unemployment jumped from 3.9 percent when Clinton left office to 7.2 percent at the end of 2008. And despite the supply-side notion that tax cuts would lead to more entrepreneurialism, in fact, the rate at which start-up companies created jobs actually fell between 2000 and 2010. Clinton left Bush a $236 billion budget surplus; Bush would leave his successor saddled with a $1.2 trillion deficit.

I don't know how "Decision Points Theater" will tackle any of that.

The bottom line on the Bush presidency is this: After losing the popular vote to Vice President Al Gore, the man who’d run as a “compassionate conservative” known in Texas for reaching out to Democrats ran a hard-right, divisive administration instead. The guy who inveighed against “nation-building” let his neocon advisers push two deadly and impossible nation-building projects in Iraq and Afghanistan, leaving almost 7,000 Americans dead, more than 50,000 wounded at an ultimate cost of $4 trillion-$6 trillion, according to a recent Harvard study.  His tax cuts blew out the budget, his economic policies favored the rich and the economy cratered on his watch.

It’s going to take more than a series of softball network interviews to rehabilitate Bush's legacy. But Republicans need him to come out of hiding if his brother is going to have any chance of being president. So watch for not only flacks like Jennifer Rubin but leading party figures to act like the Bush rehab tour is a great success. They should face the truth: Bush’s ratings only improved because he went away. His comeback campaign is likely to remind people of the disaster he left in his wake, and backfire on him, his brother and his party.

Still, getting it out of the way now at least prevents charges that the GOP is hiding its last president, which let's face it, has looked so dodgy given Bill Clinton's prominence in his party. I'd predict Bush's re-emergence will be a short-term media go-round, designed to erase the idea he's been hidden away. Then he'll be hidden away again, painting dog pictures. "I'm happy to be out of the limelight. I truly am," he told USA Today. "I am happy."

UPDATE: The PR blitz continues, with this ode to Bush from former press secretary Dana Perino, and innumerable Tweets from Karl Rove.