Many more are trapped in a jumbled mess of shattered concrete and bricks, officials report 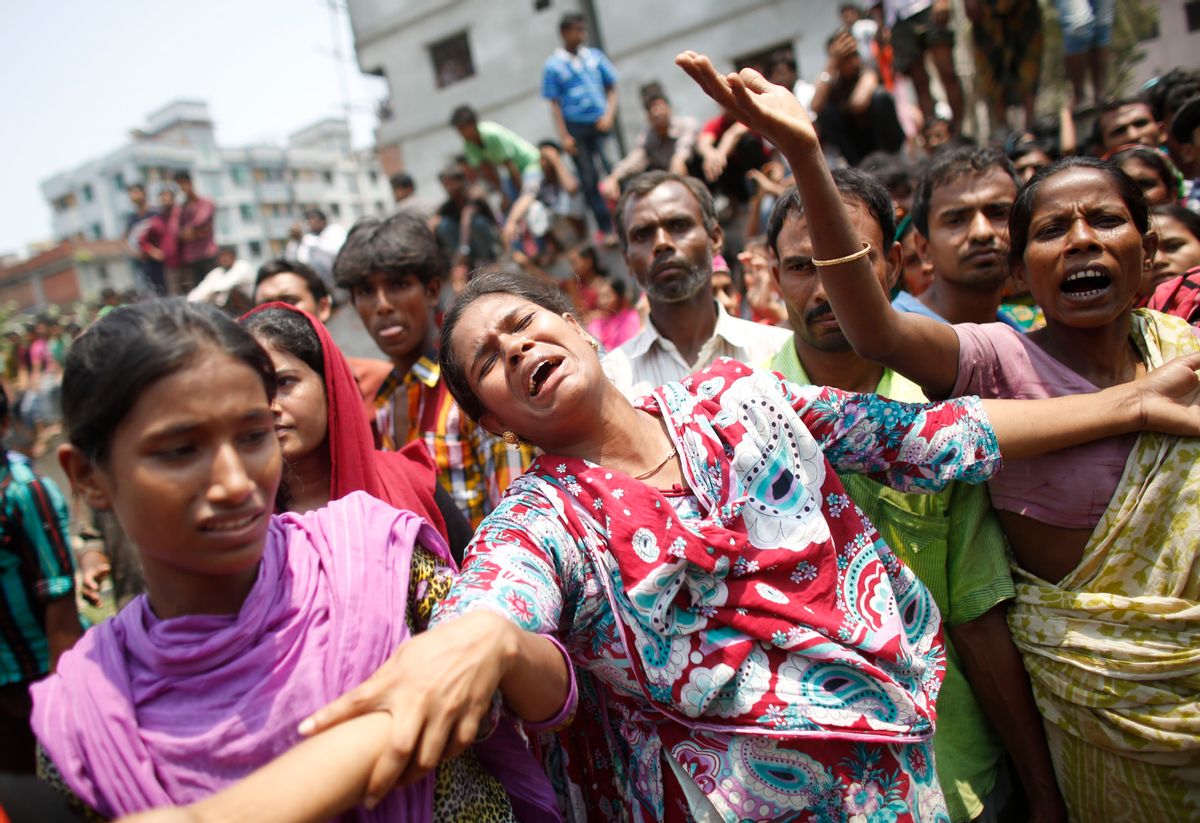 People mourn for their relatives, who were working in the Rana Plaza building when it collapsed, in Savar, 30 km (19 miles) outside Dhaka April 24, 2013. (Reuters/Andrew Biraj)
--

The collapse stirred memories of a fatal fire at a garment factory in November that killed 112 people and raised an outcry about safety in the nation's $20 billion-a-year textile industry, which produces clothing for global fashion brands worn around the world.

Workers in the Rana Plaza building said it had developed such severe cracks the day before that it had been reported on local news channels. They hesitated to enter the building Wednesday morning, said Abdur Rahim, who worked in a garment factory on the fifth floor.

But a manager from the factory assured them there was no problem, so they went inside, he said.

"We started working. After about an hour or so the building collapsed suddenly," he said. He next remembered regaining consciousness outside the building.

Among the businesses in the building were Phantom Apparels Ltd., New Wave Style Ltd., New Wave Bottoms Ltd. and New Wave Brothers Ltd. garment factories, companies that make clothing for brands including Benetton, The Children's Place and Dress Barn. Workers said they didn't know what specific clothing brands were being made in the building because labels are attached after the products are finished.

Sumi, a 25-year-old worker who goes by one name, said she was sewing jeans on the fifth floor with at least 400 others when the building fell. "It collapsed all of a sudden," she said. "No shaking, no indication. It just collapsed on us."

She survived because she managed to reach a hole in the building through which rescuers pulled her out.

Tens of thousands of people gathered at the site, some of them weeping survivors, some searching for family members. Firefighters and soldiers using drilling machines and cranes worked together with local volunteers in the search for other survivors.

An enormous section of the concrete structure appeared to have splintered like twigs. Colorful sheets of fabric were tied to upper floors of the wreckage, presumably so those inside could climb or slide down and escape.

An arm jutted out of one section of rubble. The lifeless body of a woman covered in dust could be seen in another. A firefighter carried the body of what appeared to be a teenager from the area.

Rahim said his mother and father, who worked with him in the factory, were trapped inside.

Mosammat Khurshida wailed as she looked for her husband. "He came to work in the morning. I can't find him," she said. "I don't know where he is. He does not pick his phone. Oh Allah, what will I do now?"

In addition to the factories, the building also housed a bank and shops.

Zahidur Rahman, director of public relations at Enam Medical College and Hospital, said by Wednesday evening 87 people had been confirmed dead in the collapse at the building in the Dhaka suburb of Savar. Brig. Gen. Mohammed Siddiqul Alam Shikder said another 600 survivors had been rescued.

"We had sent two people inside the building and we could rescue at least 20 people alive. They also told us that at least 100 to 150 people are injured and about 50 dead people are still trapped inside this floor," said Mohammad Humayun, a supervisor at one of the garment factories.

The collapse happened about 8:30 a.m. and since garment factories in the area routinely work 24 hours a day, it appeared likely that the four housed in the building were staffed at the time.

The November fire at the Tazreen garment factory drew international attention to the conditions workers toil under in Bangladesh's textile industry. The country has about 4,000 garment factories and exports clothes to leading Western retailers. The industry wields vast power in the South Asian nation.

Tazreen lacked emergency exits and its owner said only three floors of the eight-story building were legally built. Surviving employees said gates had been locked and managers had told them to go back to work after the fire alarm went off.

Clothes with Disney, Wal-Mart and other western labels were found at that factory.