I thought he was a joke, but after he filibustered over drones, I wondered if I'd been wrong. Nope 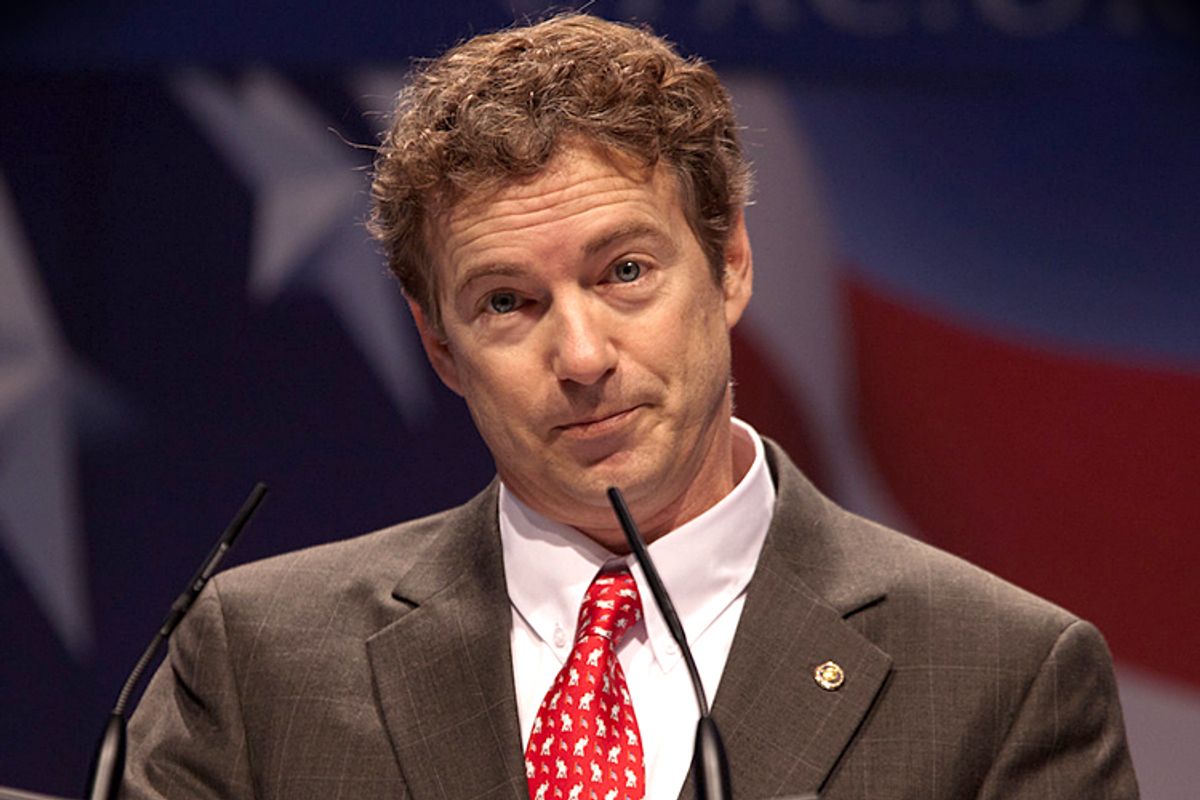 I was on vacation when Rand Paul staged his filibuster to get more answers about drones from the Obama administration, or else I probably would have embarrassed myself by praising him. I’m concerned about drones and targeted assassinations and I think it’s a perfect place for a left-right alliance. So I was glad to see Paul’s filibuster.

“I will speak as long as it takes, until the alarm is sounded from coast to coast that our Constitution is important,” Paul declared. “That your rights to trial by jury are precious, that no American should be killed by a drone on American soil without first being charged with a crime, without first being found to be guilty by a court.”

Even though I disagree with Paul on virtually every other issue and generally consider him to be kind of a joke, I’d have been happy to be proven wrong. Maybe he had a conscience. Maybe he would become a much needed civil liberties leader on the right.

Alas, I haven’t been proven wrong. Mr. Filibuster, the tribune of civil liberties, now says that drones should have been used against the Tsarnaev brothers in Boston – not only that, he told Fox’s Neal Cavuto they should even be used against someone robbing a liquor store.

Strangely enough, Cavuto himself seemed a little spooked by the technology that was deployed in the hunt for 19-year-old Dzohkhar Tsarnaev, including the thermal imaging that was able to find him in a boat and even to get some sense of the extent of his wounds. “Apparently with this thermal imaging, you can see a person behind a wall, or in this case, a cover,” Cavuto told Paul. “And I’m thinking, What else can these guys see? I didn’t even know they had that ability with a helicopter, to do that.”

“I have never argued against any technology being used against having an imminent threat, [or] an act of crime going on,” Paul replied. “If someone comes out of a liquor store with a weapon and $50 in cash I don’t care if a drone kills him or a policeman kills him.”

Wow. So Paul has gone from “your rights to trial by jury are precious, that no American should be killed by a drone on American soil without first being charged with a crime, without first being found to be guilty by a court” to “If someone comes out of a liquor store with a weapon and $50 in cash I don’t care if a drone kills him or a policeman kills him.”

Wait, it gets worse: After getting hammered by supporters for his drone flip-flop -- Matt Drudge featured the headline "How Rand Paul learned to love the drone" -- Paul flip-flopped again. “My comments last night left the mistaken impression that my position on drones had changed,” Paul said in a statement. ”Let me be clear: It has not. Armed drones should not be used in normal crime situations. They may only be considered in extraordinary, lethal situations where there is an ongoing, imminent threat. I described that scenario previously during my Senate filibuster.” But later his spokeswoman said his statement should not be read as "retracting" his remarks to Cavuto. So go figure.

Paul also made a 180 on immigration reform this week. Where in March he seemed to embrace the old libertarian concept of open borders – and more than that, declared himself an admirer of “the romance of Latin culture” in a speech to the Hispanic Chamber of Commerce -- the Boston bombing changed his mind. Well, he may still feel romantic about Latin culture, no word on that, but he has emerged as a leading demagogue on the way the Boston bombing ought to slow immigration reform. He’s even come out for banning all immigration by ethnic Chechens, which should ensure that he’s never again considered a civil libertarian, by anyone.

Of course, Paul isn’t the only GOP hypocrite on these issues. I can’t abide seeing Rep. Peter King as the face of the House GOP's anti-terror brigade, since he was an avid supporter of the Irish Republican Army as “freedom fighters,” not terrorists, back in their heyday.

“We must pledge ourselves to support those brave men and women who this very moment are carrying forth the struggle against British imperialism in the streets of Belfast and Derry,” King told a pro-IRA rally in 1982. Later he insisted: “If civilians are killed in an attack on a military installation, it is certainly regrettable, but I will not morally blame the IRA for it.”

If only Rand Paul had been around back then, he could have proposed banning all immigration from Ireland, because its people were so inclined toward terrorism. It probably wouldn’t have happened, since clearly white European immigrants or their descendants never come in for the same kind of scrutiny (or at least the Irish haven’t for a good 100 years or so), but it’s fun to think about.

Back during his filibuster, I briefly thought Paul might prove a formidable 2016 GOP presidential candidate, if he channeled American discontent with the Obama administration’s drone policy and other national security excesses. I shouldn’t have worried. He’s just another opportunist, but his spine is even more flexible than most.