"The Reluctant Fundamentalist": Is the Princeton grad a jihadi? 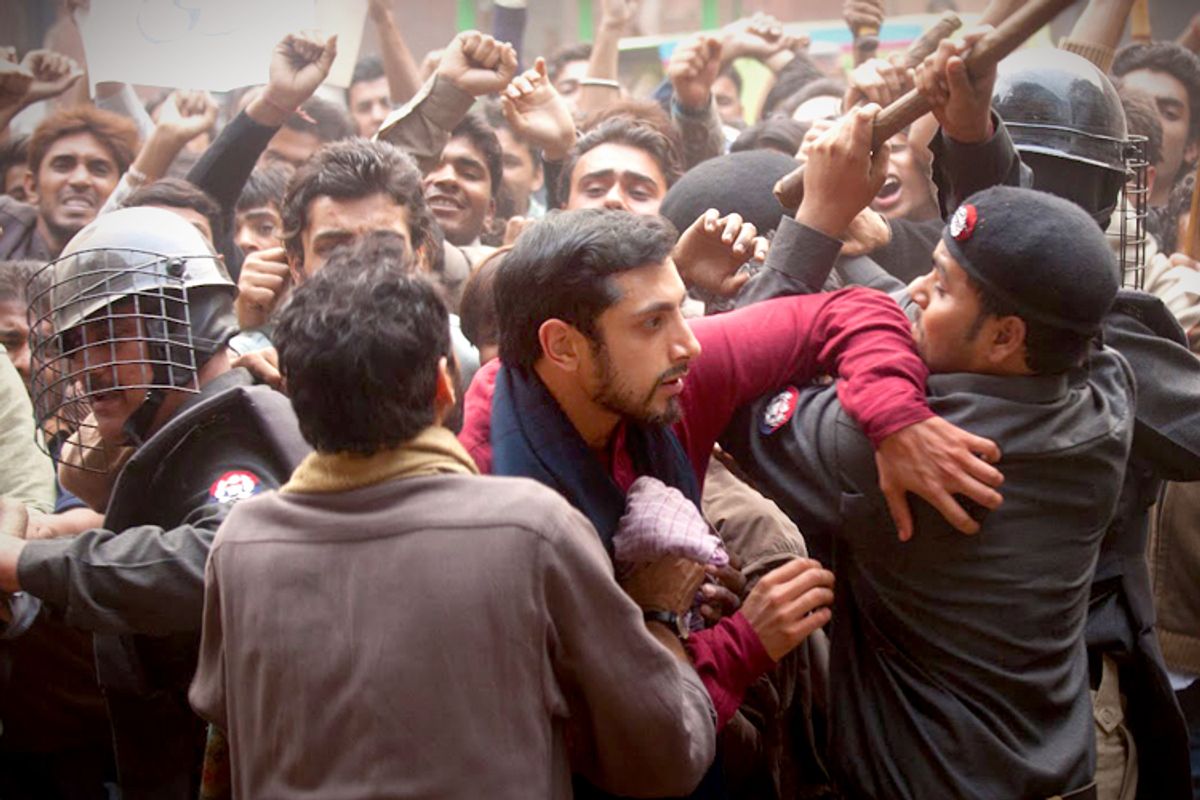 People who show up for “The Reluctant Fundamentalist” expecting an exotic and morally murky thriller about terrorism, somewhat in the “Homeland” and “Zero Dark Thirty” vein, will get it – at least for a while. No doubt it would be good for business if I told you that Mira Nair’s film, adapted from a novel by Mohsin Hamid, was about an American-educated young man who turns to violent radicalism. But this story only seems to be about that, and not for long. “The Reluctant Fundamentalist” begins with a classic opening sequence of misdirection and disorientation, in which we see an American academic kidnapped off the streets of Lahore, Pakistan, while a handsome young Pakistani receives text messages and photos that seem to link him to the crime. All this bewildering night action is set to a hypnotic traditional Pakistani folk tune, performed live in the street around a bonfire.

We’re not sure what has happened and who is responsible, and also seduced by what might be called the intentional Orientalism of the scene. Both effects are part of the method of “The Reluctant Fundamentalist,” which is not fundamentally a story about terrorism or Islam or the CIA at all. Nair (perhaps best known for her debut film, "Salaam Bombay!," and more recently for her adaptation of Jhumpa Lahiri’s “The Namesake”), who was born in India but has family roots in Lahore, is deliberately trying to sow confusion in the minds of viewers, and Western viewers in particular. If we view Rainier (Gary Richardson), the abducted professor, as an innocent educator and his young colleague Changez (Riz Ahmed) as an Islamist radical, we will see the story one way. If we see Changez as an independent scholar being persecuted by his own government, and Rainier as a CIA operative, we may understand it differently.

A day or two after Rainier is kidnapped, an American journalist named Bobby Lincoln (Liev Schreiber) comes to interview Changez in a labyrinthine rooming house near the Lahore University campus, trying to figure out whether the firebrand academic knows where his missing colleague is and can intervene to gain his release. For most of the film Changez and Bobby move through the building in a manner that seems increasingly metaphorical, while Changez spins out a long and improbable Scheherazade-style story of who he is and how he got here. Each man believes he can see through the other’s disguise: Changez feels sure that Bobby is using his press credential to gather information for American intelligence, and Bobby feels sure that Changez is driving idealistic young Pakistanis toward al-Qaida and the Taliban.

Ahmed, the British-born star of Chris Morris' “Four Lions” and Michael Winterbottom's “Trishna,” began his career on good looks and glibness (he was a rapper before he was an actor), but proves himself here in an exceedingly difficult role. Changez is a chameleonic character, difficult to figure out and not easy to like or even admire. As he tells Bobby, he began as a child of the post-independence Pakistani intelligentsia, low on funds but rich in cultural capital. A compulsive overachiever, he goes to Princeton on a 1990s scholarship, carries a 4.0 average, and lands a treasured job at a high-end Wall Street firm. His recruiter and mentor is Jim Cross (Kiefer Sutherland), a stern, hard-driving boss who identifies Changez as a financial whiz who mirrors his own modest beginnings. Even in horn-rimmed spectacles and a suit, Sutherland’s mere presence is of course a wry reference to “24,” the high-low point in pop-culture terrorist paranoia.

Feeling alienated from his own family – and especially his impoverished, absent-minded father, a prominent Punjabi poet – Changez seizes upon Jim and his promise of the meritocratic American dream with the zeal of a new convert. Indeed, this is the point of “The Reluctant Fundamentalist,” and it may be a smidgen too close to the surface: Orthodoxy with a sword in its hand is always something to be feared, and the orthodoxy of someone like Jim Cross is every bit as destructive, in its own way, as that of Osama bin Laden. Changez becomes a ruthless archangel of financial analysis, shedding jobs and shuttering divisions in company after company without any regard for the human cost.

Indeed, only when his globetrotting tour of destruction brings him to Istanbul, to close down a venerable Turkish literary house that once published translations of his dad’s poetry, does Changez come face to face with his contradictory position – and by then the course of world history has altered in any case. He watches the twin towers collapse from an overseas hotel room in the fall of 2001, and then comes “home” to an America where people with his skin color and religious background are suddenly viewed with intense suspicion. Even as a left-wing American with almost no sympathy for “war on terror” rhetoric,  I was extremely uncomfortable with this aspect of the film. I kept trying to assure myself that a Pakistani financial professional with an expensive suit and a valid passport wouldn’t be subjected to a cavity search at the airport, or police harassment on the streets of Manhattan – and then remembering that there’s no possible way to exaggerate the level of post-9/11 anti-Islamic paranoia.

All this amounts, mostly, to a compelling melodramatic swirl, with Nair and screenwriter William Wheeler (working from a story by novelist Hamid and Ami Boghani) occasionally bringing us back to Lahore, where campus violence is building and Bobby keeps trying to fend off a CIA “exfiltration” squad so Changez can finish his story. Nair has always created ravishing images (aided here by cinematographer Declan Quinn) and the locations here, mostly Lahore and Delhi, are used to create intense and compelling atmosphere. But despite Ahmed’s magnetic performance, Changez comes off as a self-centered jerk who’s needlessly cruel to his American girlfriend (Kate Hudson) and gets religion – both metaphorically and literally – rather late in the day. And I kept fruitlessly hoping that Bobby, the reporter and/or CIA asset played by Schreiber, would be offered some measure of redemption or at least dramatic complexity.

All that said, the stealth anti-capitalism of “The Reluctant Fundamentalist,” like its reminder that the basic moral equation of the “war on terror” looks very different from different vantage points, is a badly needed corrective in our propaganda-drenched society. This movie feels a little half-baked to me in the sense that it carries an exceedingly complicated intellectual agenda below the surface of a conventional thriller, and doesn’t execute either level as well as it might. At its most basic, this is a tragic human story about two deeply compromised people who long to declare their independence from a corrosive and totalizing global conflict that threatens to destroy all thought. Like the rest of us, they have moments when they almost get there.

"The Reluctant Fundamentalist" opens this week in New York and Los Angeles, with more cities to follow. It will be available on-demand beginning April 30, from cable, satellite and online providers.