Bush family furiously selling itself to Americans once again

George W. Bush's mess of a presidency is whitewashed as Jeb airs out some unpleasant past business of his own 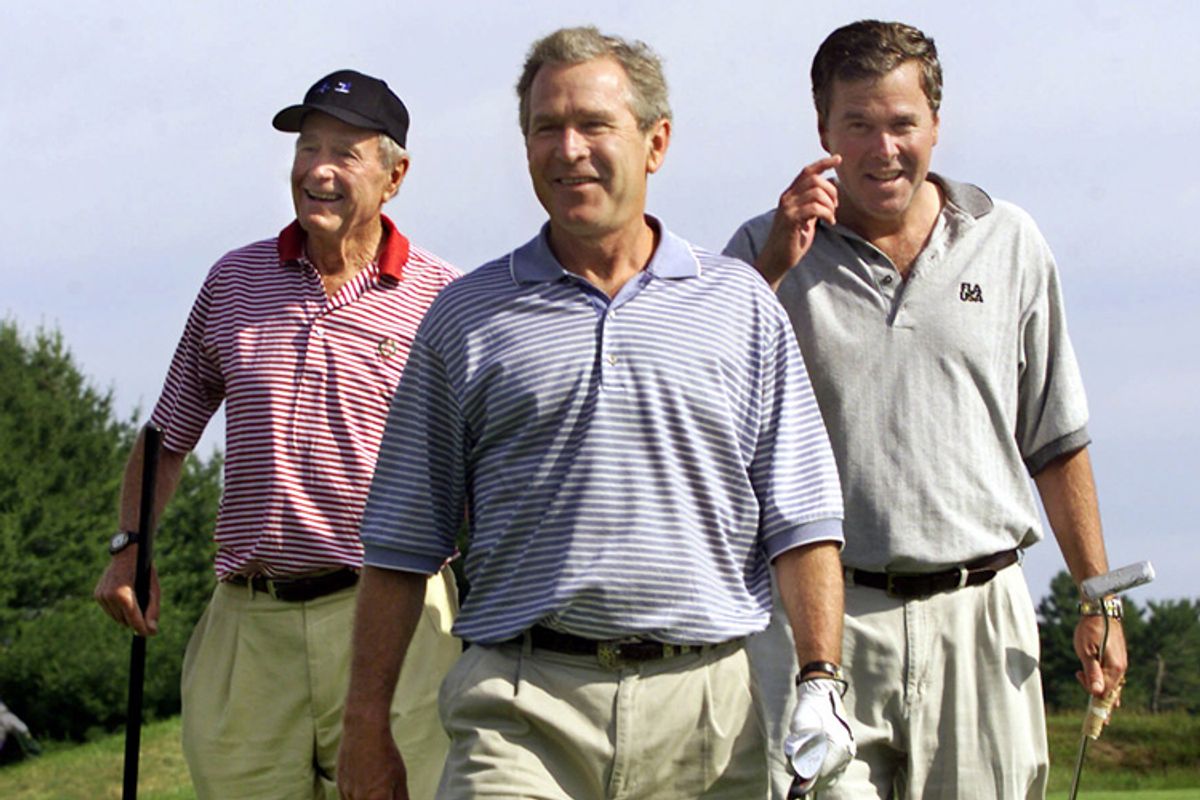 Have you been enjoying the big national Reassessment of the George W. Bush Era rollout this week? It was basically promotion for his library, which opens today in Fallujah Dallas. The Bush family and their friends/donors have been busy, giving quotes and encouraging pundits to write some "hey now that we think about it Bush was a pretty good guy" pieces. The former president himself has even been on TV (though too much reminding us of his existence might hurt those new poll numbers a bit). Today on Fox he will be interviewed by his former press secretary Dana Perino, perhaps because Jenna Bush couldn't get let out of her contract with NBC News to conduct it instead. Matt Lauer got the live interview, Diane Sawyer the taped one.

After presidents are done being presidents, they get to build big museums about themselves, because a tradition that originally involved simply making the documents and papers and records of a president available to researchers and the public obviously became this giant, expensive, pseudo-regal tribute thing, because this is America and we're really weird about presidents.

Every president gets a library, even the bad ones. Nixon's library is supposed to be a pretty cool place now that the National Archives people are running it instead of his surviving cronies. For some reason Ford -- Ford! -- has a library and a museum. Like, separate buildings in different cities. The Bush library so far sounds terrible, dishonest and hilarious, just as much of the coverage surrounding its dedication has been. (It will likely get more honest with time, as the National Archives people fix the hagiography the Bush Foundation people created.) At the library opening ceremony, the current president has to say nice things about the last president, even if the last president was a terrible president.

Thankfully, a bunch of pundits made Obama's speechwriters' jobs easier by spending the week spewing platitudes about the essential decency of the man who authorized and condoned torturing people. Whether George W. Bush is a Good Man, or a Smart Man. Neither matters: He was a bad president. A historically bad president, honestly, in terms of damage done to the country and the world and even in terms of even achieving his own goals and the goals of his party and ideological movement. His biggest successes were an expansion of Medicare and getting permission from Congress to topple Saddam Hussein. So, yes, he is a kind person who is also secretly very smart when there aren't cameras around. He also tortured, failed to stop 9/11, appointed various dipshit party hacks who brutally botched everything from the response to Hurricane Katrina to reconstruction following the conclusion of our invasion of Iraq. History will not judge his administration remotely kindly. I'm not sure why anyone, even a Bush supporter, would expect it to. (I mean, until some future-Amity Shlaes-like person writes a book about how secretly Bush is the BEST president.)

Alas, no one at the ceremony today will say "George W. Bush may be a super smart and generous and kind person but he was just a really, really bad president," though at least one of the presidents there will be thinking it. (Hell, maybe all the presidents there, besides the one we're talking about.) Also probably no one will bring up torture.

The orchestrated rehabilitation of the Bush name isn't just happening because of the library. It's also pretty urgently politically necessary. George P. Bush, the president's nephew, is running for statewide office in Texas in 2014. (P. Bush is apparently terrible at giving speeches and is utterly unable to answer questions from the press so he will obviously be president one day.) Texas is friendly territory for a Bush. The country at large, one poll notwithstanding, isn't yet. Bush's brother Jeb desperately needs it to be, because he plans on running for president in a few years.

His "pitch" is basically that he can win. He can win because he is the only plausible candidate that could win over Latino voters. The idea that he can do so is based on the notion that the ethnic politics of Florida are hugely relevant to the politics of the heterogeneous and diverse Latino communities of the nation as a whole, and also the fact that he speaks Spanish and has a Latino family.

The Washington Post yesterday ran (in the Style section) a lengthy piece on how Jeb Bush is practically an honorary Hispanic person, because he married a Mexican woman and speaks Spanish. (Seriously, half the piece is about how good he is at speaking Spanish. He is apparently quite good at it!) The piece, though overwhelmingly positive, begins with a sad story: In 1991, the Bush family's maid, a Honduran woman named Maria Magdalena Romero, was suddenly deported, after working for the family for three years.

On a mild winter morning in 1991, two immigration agents appeared at the door of the family home looking for the woman Bush’s younger son and namesake, then just 10 years old, remembers as “a super nice lady.” They carried deportation orders.

It didn’t matter that Bush’s father was president of the United States at the time or that a Secret Service agent had answered the door. Romero, who was in the country illegally but had a work permit, wasn’t getting a reprieve.

“It was a difficult time for all of us, but most of all for Maria,” Jeb Bush said in an e-mail about that day. His son, Jeb Jr., hadn’t even realized she’d been deported. “I thought she just left,” Jeb Jr. said in a recent interview.

So, Bush is, partly, just getting this story out there really early, so that if anyone brings it up in 2015 or 2016 it will be an "old story." But between this and the weird book screw-up, which forced Bush to flip-flop on citizenship like four times in the space of a month, Jeb Bush's rollout as "the candidate to fix the GOP's Hispanic problem" is not going as smoothly as the rollout of George W. Bush as "a president who wasn't as bad as you thought at the time."

The Post story leaves out some really interesting details. The deportation was reported in the press in 1991. A brief Miami Herald piece from Jan. 14, 1991, has more. The agents knocked on the door and removed Romero while Bush was out jogging. Bush then reached out to the director of the Miami office of the INS, but not really to try to do anything for Romero:

"[Bush] indicated they had no problem with the two agents coming to the house," [Miami INS head Richard] Smith said. "They were only concerned the lady got home safely. After three years, she kind of came to be a part of the family. We obviously verified that, and they're quite happy."

It used to be that the district INS office sent letters to people who are going to be deported, giving them advance warning and letting them know they should surrender to the local office.

"The law does not require that we do that anymore," Smith said.

Shocking twist!* Jeb's dad, coincidentally, will also attend the dedication today. Romero, despite being "like a member of the family," will not. It is going to be so fun having the Bushes back in our lives!

*For the record, the Immigration Act of 1990 was a Ted Kennedy-sponsored bill that passed with overwhelming Democratic support. It increased legal immigration and made legal immigration for LGBT people and people with AIDS possible. I assume some tougher deportation rules were designed to attract conservative support.