With crowdsourcing, everyone's a detective now

Reddit got it all wrong. So why do we all think we have the expertise to solve crimes after watching "CSI"? 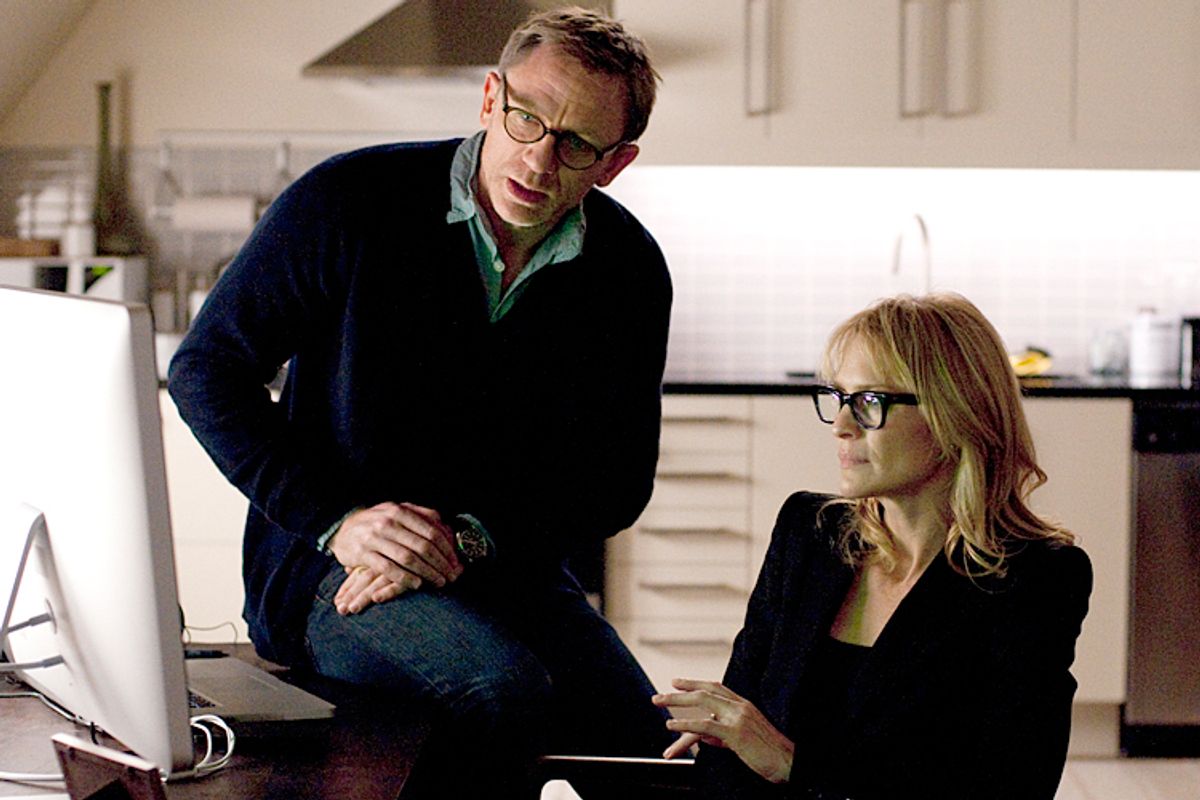 Observers looked on in concern in the wake of the Boston Marathon bombings last week, as Reddit and 4Chan fingered assorted innocent civilians as suspects. Many were reminded of 17th-century witch hunts and Richard Jewell. Me, I thought of "The Girl With the Dragon Tattoo."

As is known by anyone who has either read Stieg Larsson's 2005 novel or seen one of the two film adaptations (and that seems to be just about everyone), the big break in the case comes when Mikael Blomkvist sees a photograph taken of spectators at a parade 36 years earlier. One of those spectators, a 16-year-old girl named Harriet Vanger, disappeared that day, and Blomkvist has been hired by her great uncle to find out what happened to her. Blomkvist notices that Harriet, unlike all the other people in the crowd on the sidewalk -- who are watching the parade and smiling -- is instead looking in another direction with an expression of great distress. After burying himself in the photo archives of the local newspaper for days, Blomkvist unearths a shot from a different angle, showing a woman taking yet another photo, over Harriet's shoulder. By tracking down that woman and her snapshot, he's able to see exactly who Harriet feared.

All this is fun to read about, even if the likelihood of so much photographic coverage of a provincial Swedish parade in 1966 -- not to mention the survival of all those negatives -- is nearly as hard to swallow as Larsson's famously ponderous prose. It's another thing, however, to watch real people effectively attempting to reenact this scenario, poring over photographs taken near the finish line on April 15, circling "suspicious" characters in red and drawing yellow arrows pointing out telling details. While the subreddit Find Boston Bombers has been made private (and Reddit has apologized to the individuals targeted by it), you can still view 4Chan's "evidence," some of which consists of portentously zeroing in on "suspects:" people who, like Harriet Vanger, are gazing off in another direction instead of watching the race.

Other commenters have remarked on the inept nature of this crowdsourced investigation and its troubling focus on dark-skinned young men, at least one of whom was terrified by his sudden, unearned infamy. But just as fascinating is the apparently widespread assumption that the average person screwing around on the Internet is well-equipped to conduct forensics analysis of photographs. Yes, the FBI did ask the public to help, but what it wanted was witnesses and video or photographs taken by them. It did not request help in evaluating those images, or at least not from a gaggle of random untrained guys squinted at the screens of their home computers miles and miles away from the crime scene

The hubris of redditors, on abundant display in Find Boston Bombers during the days following the bombing, surely explains some of this preposterous assumption of expertise. But Reddit was far from the only offender. All over the Internet, in comments threads and Twitter feeds, you could find self-styled explosives experts puffed up like little bantam roosters and clucking about how much they could deduce about the bombs simply by looking at the color of the smoke, or people making any other sort of authoritative statement you might care to imagine. This was all on evidence drawn primarily from watching TV.

It's sometimes said that everyone's a critic in the age of the Internet. (Actually, this was said long before the Internet existed, but the statement has vaulted from hyperbole to fact in the past 20 years.) What we learned last week is that everyone is also a detective. Make that a self-styled detective.

Sleuths are everywhere in our popular culture. On any given evening, nearly half of prime-time television programming will be about people solving crimes. (That's on broadcast TV; cable networks seem more interested in the criminals.) Most Americans have never been arrested but can nevertheless recite the Miranda warning by heart. We know all about good cop/bad cop, the spouse being the most likely suspect in a murder, turf wars with the feds and the importance of keeping a crime scene undisturbed.

Crime fiction (if you include thrillers) is the most popular literary genre, according to a 2010 Harris poll. We're marinating in the stuff; some of us consume almost no other form of storytelling. We identify with the investigator and try to suss out the culprit before the big reveal at the end. Is it any wonder, then, that -- like Catherine Morland, the gothic-novel-glutted heroine of Jane Austen's "Northanger Abbey," who looks for dark secrets and sinister motives where there are none -- we have absorbed the notion that, should a crime present itself, we are eminently equipped to figure out whodunnit. Everyone wants to be the hero, and the hero is, more often than not, a detective.

If pressed, no rational person would claim that watching "CSI" or "Monk" imparts any of the law-enforcement skills needed to get to the bottom of a challenging case like the marathon bombing. Along with all the other stuff we know about police work, we also know that the representations we see in books and -- especially -- on-screen are laughably unrealistic and a source of nagging annoyance for actual cops.

Participants in Find Boston Bombers made the same joke over and over again: "Enhance!" -- a reference to the recurring pop-culture cliché in which a detective, peering at a computer screen over the shoulder of the tech staffer, spots a tiny visual detail that, when magnified, provides an important lead. A popular (and hilarious) YouTube supercut compiles over a dozen instances of this trope. So the redditors know how lame this fantasy of infinitely enhanceable video is, yet that didn't keep them from griping about the low resolution of the images of the Tsarnaev brothers (captured by a department store security camera across the street) once those were released.

"'CSI' was never intended to be anything other than an exciting, interesting dramatic program," Jan Burke, a crime novelist who founded the Crime Lab Project to help make the public more aware of how forensic science works and of the deplorable underfunding of America's crime labs, told me. "Mystery novels are meant to entertain readers and (in some cases) to allow us to take a look at the nature of justice." Forensic science, however, "as it should be practiced should only be in the hands of those specifically educated to do so, ideally at accredited forensic science university programs and by those working in accredited labs." The public can and does provide essential help by supplying information (Burke cites NamUs, the National Missing and Unidentified Persons System as one example), but unfortunately, doing that just makes you a conscientious citizen -- a nameless minor character -- rather than a detective-hero.

Just as we're all convinced that advertising has no effect on us, we'd all like to think we know the difference between fact and fiction. And most of us do know the difference. However, knowing doesn't count for as much as we believe it does.

Much of our behavior is shaped by unconscious or half-conscious responses to ideas we've soaked up without really thinking about them. Blame it on mirror neurons or some other aspect of our primate origins, but we have a strange tendency to conflate movies and TV we've seen with actual experience, and when we fall in with a crowd of people who share and affirm that tendency -- who keep telling us that, yes, we are the detectives, we are the heroes, we will save the world! -- that triggers yet another set of primate responses and suddenly all our better judgment goes out the window. I do not doubt that many of the redditors who participated in Find Boston Bombers are ordinarily smart, sensible individuals, but there are times when a crowd just brings out our dumbest side.

Publishers Weekly on Harris Poll about popularity of crime fiction

Website for NamUs, the National Missing and Unidentified Persons System