An expert explains why Bush's national monument will likely degenerate into an empty, wasteful, gimmicky albatross 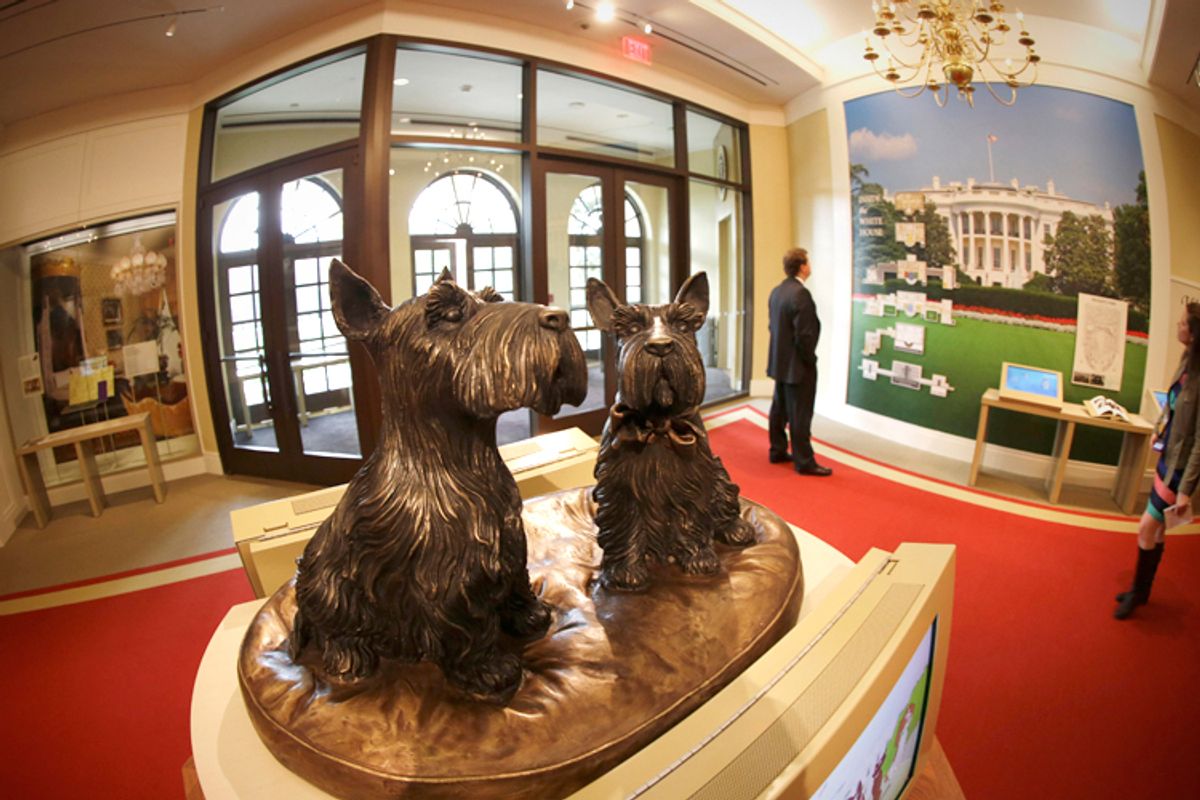 The people who built the George W. Bush Presidential Library, which opened today, envision hundreds of thousands of tourists descending annually on Dallas to gawk at the Decider-in-Chief’s artifacts. To pore over the “War President’s” trophies. To participate, virtually, in major crises that he faced. And, of course, to leave behind – in the form of admission tickets, gift shop baubles and Texas-sized meals – as much of the economic gains they’ve made up since Mr. Bush left office as they can spare.

The former president’s harshest critics, of course, can’t imagine why anyone would want to visit such a place. The more snide – and less talented – of them make lame jokes about what books may or may not be on the shelves (it’s not that kind of library). Or which gaffes, catastrophes and tragedies from his term in office the exhibits portray (they are predictably criticism-free). Or – as he himself remarked in a recent interview – whether or not he can actually read.

The real story – at least for the time being – is somewhere in-between. Even with all of the initial fanfare and attention, there won’t be an unending flood of tourists lining up to get in. And despite his relatively low approval ratings, there is interest in what he has to say about himself with all of that technology and exhibit wizardry. But what packs them in at the most popular presidential museums is sorely lacking in Dallas. George W. Bush is not like the three presidents whose libraries command the greatest number of visitors. He does not inspire hero worship like Ronald Reagan; he does not inflame passions – in every sense of the term – like Bill Clinton; and he does not provoke wistful, what-if reveries like John F. Kennedy.

In any case, after all of the strong supporters, the local boosters, the regionally-curious and the what-the-heck-let’s-stop-along-the-way tourists have had their fill – a lot sooner than both the lovers and the haters understand – the nation’s newest presidential library will be empty. And they’ll be trying to drum up visitors with every gimmick, trick and hook they can think of – just like most of the other libraries, which struggle to attract visitors.

And they try everything. Adding touch-panel interactive exhibits. Displaying presidential limousines and aircraft. Featuring best-selling authors, whether or not the book has anything to do with the president, his Administration, or even politics in general. And temporary exhibits. Lots of temporary and special exhibits. On every conceivable subject: the culture of wine, Chinese art, custom motorcycles, the traveling miniature White House – anything to boost attendance figures. Even at the nation’s most-attended library – the Reagan – the latest splashy temporary exhibit wasn't on the Cold War or His Eternal Optimism or The Wit and Wisdom of the Great Communicator; it celebrated Treasures of the Walt Disney Archives. Twelve thousand square feet (only two thousand fewer than the entire permanent exhibit at the new Bush museum) of Disney treasures. At the Ronald Reagan Presidential Library.

Whether or not a library is located in a major metropolitan area or if it’s for a Republican or Democratic president or if it has the coolest exhibits, about the only determining factor that reliably predicts if, ten or twenty years down the line, people will still visit is the approval rating of the president when he left office. If it was high – like Reagan and Clinton – attendance will be high; if it was low – like Hoover and Nixon – attendance will be dismal. Using that method, the new Bush Library will soon look a lot more like a Hooverville than the Shining City on the Hill.

To visit a presidential library – even one dedicated to a president for whom you didn’t vote, or perhaps didn’t particularly like – is a singular experience. Some are modest, and others are way, way over the top. This one chooses to ignore notorious topics, that one decides to spin controversies. From analog displays to high-tech exhibits, gifts of state to handmade objects, letters and recreated offices and theaters and photographs – thousands of photographs – presidential libraries are fascinating artifacts in and of themselves. And they’re uniquely American: proud, defensive, and a little self-absorbed. When they first open, they’re full of promise and fanfare. A newly-minted library can seem, to supporters, destined to enthrall visitors for a hundred years.

But hard as it is to believe now, amidst all the celebrations and the protests, the Bush Library – like most of the ones before it – will drop off, in attendance and fundraising, precipitously. Not right away. They’ll be a “re-dedication” ceremony in eight or ten years, a “re-design” of the exhibits to examine “newly-available material” and include “historical re-evaluations” of his presidency. The former president will invite national and international heavyweights to conferences, lectures and symposia. If another Bush runs for the White House, there will be a renewed interest in donors and funding sources. Many years from now, when he and his wife pass away, the library will be the site of solemn ceremonies. And then it’s all downhill – if it hasn’t already reached that point. In the year following the death of the nation’s thirty-fourth president, Dwight D. Eisenhower, one million people came to Abilene, Kansas to pay their respects at his presidential library, museum and place of burial. That’s about twice as many as ever visited another library before or since. In 2007, the Eisenhower Library saw about 64,000 visitors.

But to focus on how many and how much and what does he say and what does he leave out and who goes and who doesn’t misses a larger point. Presidential libraries are supposed to be just that: libraries. Repositories of records. Guardians of history, of the documentary evidence of a presidency. They’re not supposed to be theme parks – or at least, they didn’t start out that way. All it took was the idea that by regulating access to those records, and carefully planning how he is evaluated and commemorated, a legacy wouldn’t have to be left to historians; a president could write his own history. Once we passed that point, there was no looking back. But maybe there can be. Maybe we – the government, the taxpayers – can return to the libraries’ original purpose, and let others operate grand memorials. Without public dollars. The idea isn’t so far-fetched.

Franklin Roosevelt donated his presidential library at Hyde Park, New York to the people of the United States in 1940. Built with private funds at a cost of $376,000 (or 6.2 million in today’s dollars), the modest fieldstone structure that he designed preserves his papers, books and memorabilia. While FDR’s inspiration for building the library clearly was the records, he included a small public area so that visitors could view his personal collections and what he called “oddities” – items that people had sent to him during his time in office.

That FDR preserved his historic twelve-year presidency and made available the records of the Great Depression, the New Deal, and World War II has been an enormous gift to our country and the world. Congress approved this first presidential library, and then formalized the system with the passage of the Presidential Libraries Act in 1955.

But in the years since, these archival institutions have evolved to become enormous commemorative memorials. While the president’s papers are still housed in them, the archives have become afterthoughts to state-of-the-art museum exhibits, in-depth educational curricula, often-controversial public programs, and in some cases, overtly political events.

It’s natural that family and strong supporters would want to commemorate – even celebrate – a president’s legacy. But the National Archives – the federal agency charged with operating and maintaining the libraries – often puts more resources into the museum and public events than it does on processing and opening records. Even the libraries opened decades ago haven’t finished making all of their holdings available.

The George W. Bush Library will begin accepting Freedom of Information Act, or FOIA, requests for most of their records on January 20, 2014. But just because the documents are subject to FOIA does not mean they’re processed and available for release. Soon after the availability date, the backlog quickly will be measured in years, as is the case with the three most recent libraries (Ronald Reagan, George H.W. Bush and Bill Clinton).

The Bush Library also may withhold certain records, at the request of the former president, until January 20, 2021 – at which time a new FOIA backlog for those documents would then begin to grow. There are many records journalists and historians are eager to see that will not be released for a decade or more.

On top of the limits on access to records, presidential libraries are getting bigger and bigger – despite legislative attempts to rein in the size and costs. Congress has passed laws specifying building size limits and requiring endowments from the private organizations that raise the money and build the libraries. Presidents, though, continue to find loopholes, far exceeding the restrictions without penalty.

And the libraries are getting pricier: the first Bush Library cost fifty percent more than the Reagan before it, and Bill Clinton’s was built at twice the cost of Bush’s. While the total cost to build the George W. Bush Library wasn’t quite twice that for the Clinton, the Bush Foundation raised five hundred million dollars. That’s more than all twelve earlier libraries combined. Despite legislative efforts to make these foundations pay for operating the libraries, only a small fraction of the money raised will go to the government as an endowment.

If these institutions were maintained the same way they’re built – privately – there wouldn’t be a problem. But the National Archives has accepted responsibility to run the Bush Library and Museum, as they do the other twelve. The total cost to the taxpayers for all thirteen presidential libraries is approaching a hundred million dollars a year – and growing.

Even though the Archives operates the museums, the agency doesn’t really have a say in their content, scope or appearance. The president’s supporters design, create and mostly pay for exhibits, while enjoying the government’s stamp of approval. As one might expect, the history displayed in these museums is not terribly balanced; in fact, it’s often quite skewed. Instead of fairly portraying a president’s life and years in office, the newer libraries have become legacy-polishing temples that all but ignore controversy or criticism.

Meanwhile, at the current rate of processing, it may take well over a hundred years for all the records, computer data, photographs, film, audio and videotape stored in the libraries to be opened to the public. Federal budget cuts and ever-increasing pressure to improve exhibits, increase attendance, and “pack them in” will continue to drain money and personnel from records.

I don’t think this is what our representatives intended from the start, nor each time they amended the legislation over the last six decades. And it’s not what FDR envisioned. He began the tradition to preserve and make available the historical record of the presidency. We should tell Congress – made up, perhaps, of too many who believe one day they will have their own library – to stop accepting these partisan shrines and only fund presidential archives. We should leave the myth-making – by far more costly and problematic – to private organizations.