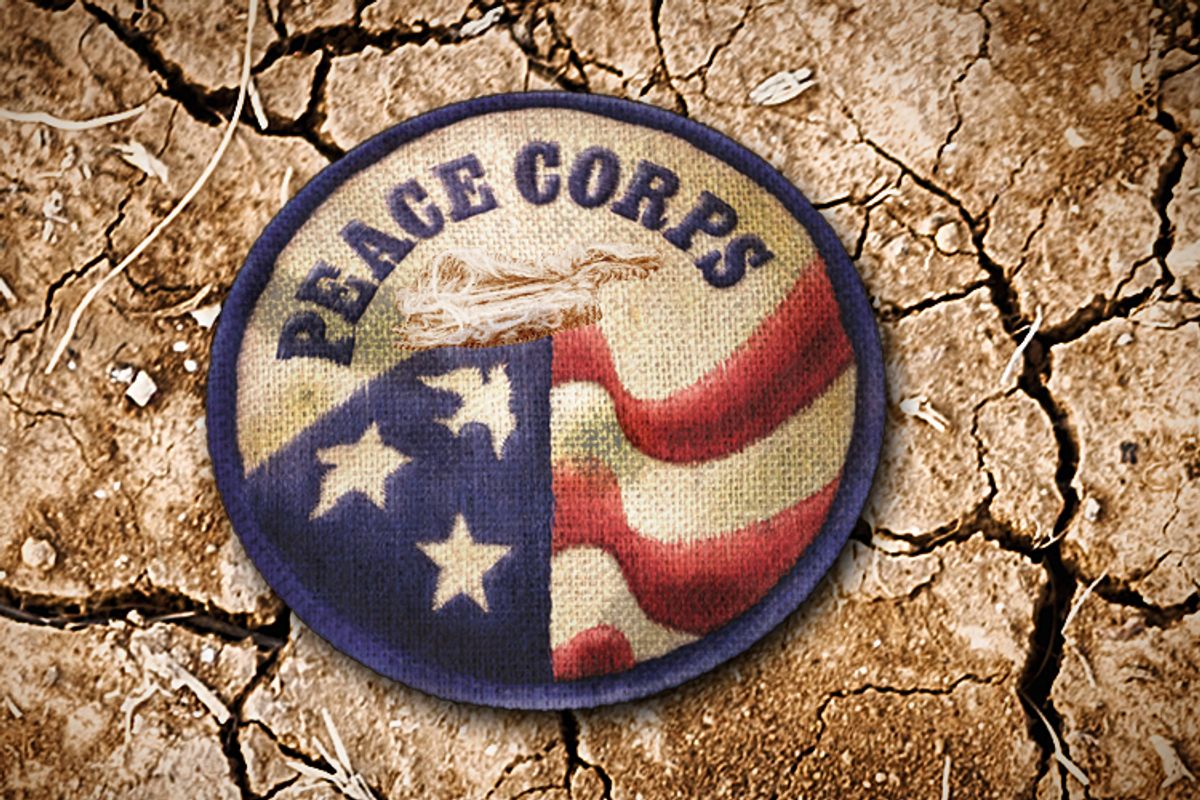 "The safety and security of Peace Corps Volunteers is our highest priority. Over the past few years, we’ve put in place a number of new, significant practices and safeguards to reduce the risks for Volunteers and ensure victims of crime receive compassionate and effective support.

The Peace Corps supports Senator Lautenberg’s bill and the President’s Fiscal Year 2014 budget, which extends the same rights and protections to female Peace Corps Volunteers as many of their federal colleagues by applying exceptions on abortion restrictions as outlined in the Hyde Amendment."

As Mary Kate Shannon waited to find out if she was pregnant after being raped for the second time as a Peace Corps volunteer in Peru, the healthcare coordinator told her her options were limited. "If I were pregnant, the Peace Corps could not pay for the abortion due to some kind of federal law," Shannon recalled in an interview with Salon. They would, however, pay for parenting classes.

"I felt betrayed," Shannon said. "I felt like it was a decision that was going to be made for me. I wasn't in a place financially where I felt like I could pay for it."

The pregnancy test came back negative, but the experience led Shannon to support the newly introduced Peace Corps Equity Act, which would extend insurance coverage for Peace Corps volunteers for abortions in instances of rape.  "The Peace Corps is the only government agency that doesn't have [insurance coverage of abortion services] for women who become pregnant as a result of rape -- it's a technical fix in that sense," said Casey Frazee of First Response Action, an advocacy group for Peace Corps volunteers who are survivors of sexual assault.

Women make up about 60 percent of Peace Corps volunteers. It's difficult to know whether the rate of sexual violence, reported or unreported, is higher for them than in the United States, but their often-isolated circumstances, the perception of young American women as sexually available, and institutional neglect all exacerbated the situation. "Faraway legal systems, magnified aloneness and isolation, being away from family in your greatest hour of need, and the unique form of mental health support we receive because of limited in country resources volunteers receive if they chose to return to service," were some of the factors Shannon cited in a blog post for First Response Action.

That indifference or victim-blaming had been the culture of the Peace Corps for decades became clear in the testimony before Congress for what would become the Kate Puzey Peace Corps Volunteer Protection Act, signed by Obama in 2011. Dr. Karestan Koenen testified that after being raped as a volunteer in Niger, she experienced a series of inadequate or harmful responses, including the staff member at the inspector general's office who told her, "I am so sick of you girls going over there, drinking, dancing and flirting, and then, if a guy comes on to you, you say you have been raped when you have led them on."

Any legislation expanding access to reproductive services likely grinds to a halt at the door of the House, and the same was true when the House spent its last cycle busily passing showy restrictions on abortion that would die in the Senate. But the single exception so far has been coverage of abortion for raped servicewomen and dependents through the Shaheen Amendment this year, which was included in the National Defense Authorization Act. And the congressional reforms on sexual assault response were broadly bipartisan.

The Peace Corps Equity Act, introduced Thursday by Sen. Frank Lautenberg, would be an incremental policy change, but a potentially doable one that gives Republicans the unappetizing choice between "expand[ing] federal involvement in abortion,” as Americans United for Life president Charmaine Yoest put it (disparagingly) and appearing to be callous to the needs of rape survivors. (Just in time, Todd Akin is borderline threatening a comeback.)

Shannon says that though there's a ways to go in implementing an efficient and consistent response to raped Peace Corps volunteers, she was the beneficiary of the 2011 legislation, including the fact that she had an official victims' advocate to see her through the process. But when it came to her potential pregnancy, "I felt like no one was fighting for me at that point."