Top 5 investigative videos of the week: Stoned on the job

From pot brownies to nerve-calming heads of lettuce, a look at the finest docs YouTube has to offer 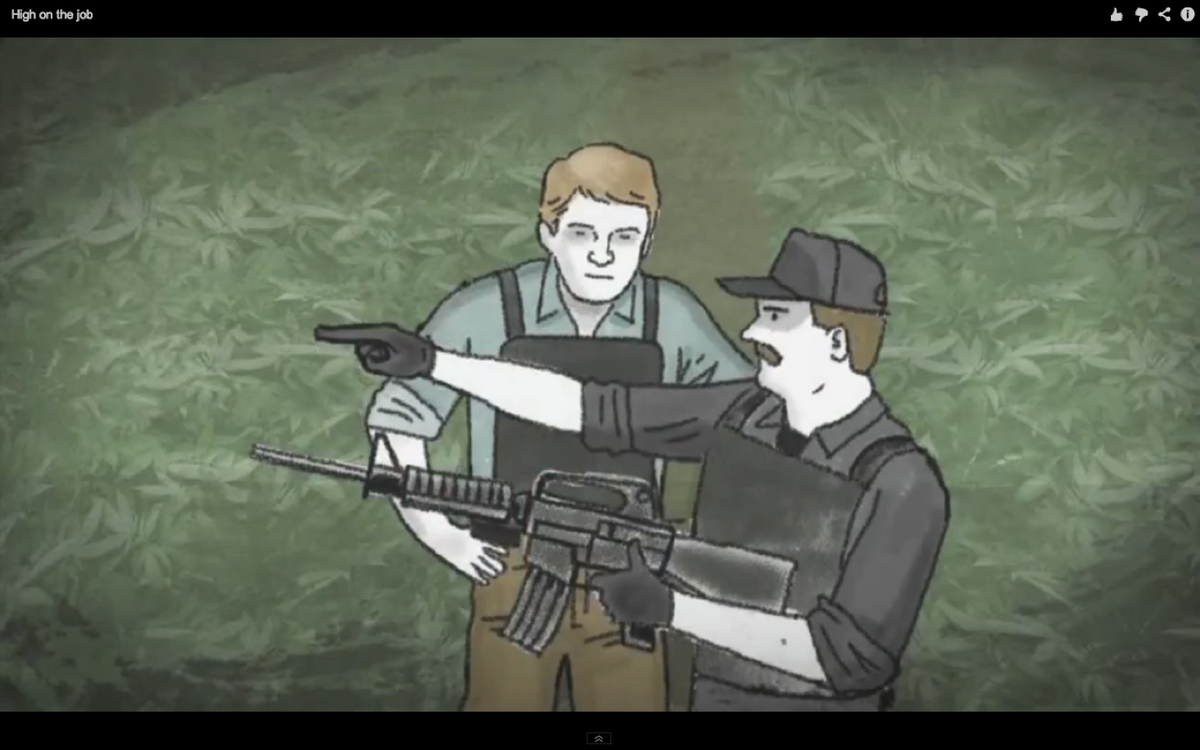 Scene still from "High on the Job"
--

Notes to self after watching this week’s videos: Never get sent to death row in Yemen, try eating lettuce during a Syrian firefight to calm the nerves, and always nibble sparingly at the brownie when covering a medical marijuana event.

For a first look at the best news and documentaries available online, please take a moment to subscribe to The I Files, a highly digestible one-stop news source. Think of The I Files as a pot brownie you find at a party, a delectable treat that takes you on a magical mystery tour of the world’s news.

“High on the Job,” Center for Investigative Reporting

Ever had one of those days at work when one little mistake sends things spiraling out of control? This happened to Michael Montgomery, a reporter for KQED (the public TV station in San Francisco) and the Center for Investigative Reporting, when he inadvertently got a little too close to the story he was covering.

In this whimsical and self-deprecating animation, Montgomery recalls the time he was reporting on a medical marijuana party in Los Angeles and accidentally (no, really!) ate some brownies that happened to be laced with some very potent medical-grade marijuana. Montgomery’s planned flight home turns into a trip of an all-together-different sort – one that is not at all helped by Virgin America’s funky lighting and surreal “Battlestar Galactica” décor.

While Montgomery’s experiences are funny and relatable (er, possibly, to some readers), the incident also prompts the veteran journalist to think more deeply about the pot industry that he has been covering for years.

One of the first reactions after the Boston bombings last week was a deep and profound hope from many members of the Islamic community that those responsible were not Muslim. If the bombers professed faith in Islam – however warped their understanding of the faith – many worried it would once again confirm stereotypes of Islam as a violent religion.

Not long ago, New York went through a public battle over conflicting understandings of the word “jihad.” While some people, and dictionaries, define “jihad” as a holy war, many Muslims point out that the concept originally referred simply to a “struggle” – including an individual believer’s own internal struggle over questions of faith and ethical behavior. But certainly since 9/11, “jihad” has taken on a more militant connotation.

In response, some American Muslims launched the “My Jihad” campaign in a series of billboards trying to reclaim the original meaning of the word and educate the public. But these ads prompted a backlash campaign spearheaded by conservative commentator and activist Pamela Geller, whose group took out dueling bus ads with inflammatory images of Osama bin Laden and the burning twin towers, insisting that “jihad” is all about violence and terrorism. Geller gained notoriety several years ago with her staunch opposition to the proposed Islamic cultural center near ground zero. She was also in the news last week when she prematurely pointed to a radical Saudi fundamentalist as being responsible for the Boston Marathon bombings.

“Witness – The Revolution is Being Televised,” Al-Jazeera

“The Revolution is Being Televised” chronicles a group of young media activists in Syria. Armed only with small video cameras, these young men – former businessmen, furniture salesmen and wedding videographers – risk their lives to film the ongoing war atrocities. They upload the videos to YouTube and other sites in hopes of swaying public opinion against the Syrian regime.

This immersive film captures the extreme tension, danger and occasional humor in these men’s lives. At one point, several of the men hit the floor as bombs go off nearby and then, after a moment of silence, laugh uproariously at themselves.

“It wasn’t even close!” one says dismissively. Another man gnaws on lettuce, which he claims calms his fears during air raids.

After long days filming air attacks and the victims of bombings, the media activists spend their nights arguing whether what they’re doing makes any difference in the war and whether their sacrifices are worth it in the end. Everyone has lost friends and family members.

One journalist recalls the time he was filming a man who had just been severely wounded in an attack and suddenly realizes, as he is filming, that the dying man is his own brother.

The kids on death row in this story are heartbreaking, their stories devastating, their plights almost unimaginable. But the unexpected revelation in this video is that Yemen has something called the Children’s Parliament, an institution that apparently has the power to save some of the imprisoned children from being executed.

Members of this junior Parliament are between 13 and 15 years old and take on issues such as child labor, early marriage, malnutrition and juvenile justice. These kids take their job seriously. We see them interview a frightened teen on death row and interrogate government officials.

“I believe they are more honest than adults,” says one man, “because they have no vested interest with (government) ministers.”

The Children’s Parliament takes credit for some significant reforms, including strengthening laws on children’s rights and pressuring officials to stay the execution of two juveniles. This piece left me with several questions about how this Children’s Parliament really works and who exactly in Yemen is behind it. It definitely motivated me to seek more answers.

The United States has 5 percent of the world’s population and 50 percent of its guns.

Vice travels to Florida to hear from law enforcement officials, gun store owners and others who are afraid that any measure to regulate firearms will result in a slippery slope ending with an outright ban. Vice demonstrates how easy it is to purchase a gun in Florida without having to go through any background checks or waiting period. A Vice reporter buys a gun from a guy he found on a Craigslist-like website, and the deal goes down in the middle of a parking lot at 10 p.m. – no questions asked. It’s all perfectly legal.

Although the story was posted in January, one part already feels outdated – the near certainty of the correspondent that the Sandy Hook Elementary School shooting deaths would prompt a fundamental change in U.S. gun laws. As the reporter briefly reviews the worst mass shootings of the last 30 years, he concludes that given the horrific nature of the crime in Newtown, Conn., “this time, there will almost certainly be a massive legislative shift on a national level.”