The most cynical, clear-eyed and entertaining show about power and corruption wraps up for the summer 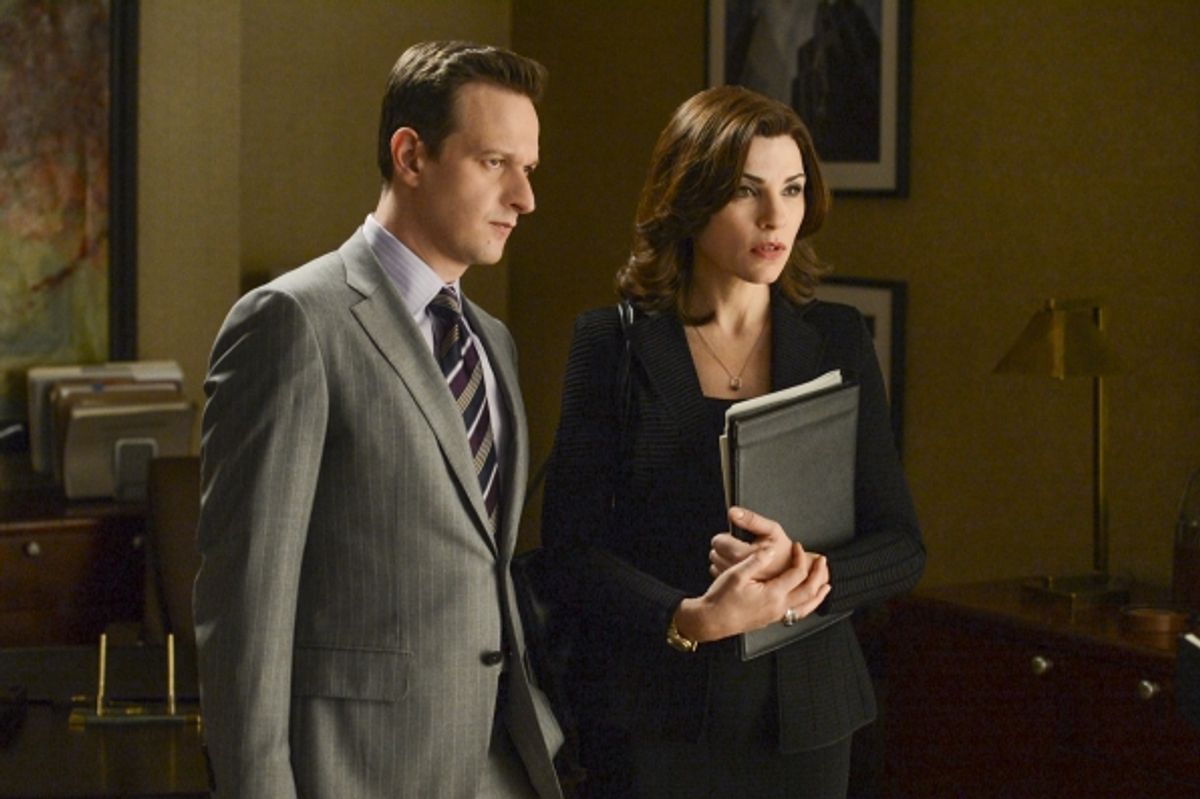 “The Good Wife” finished its fourth season last night, overshadowed as always by TV’s other blockbuster Sunday offerings, from “Homeland” to “Game of Thrones” and “Mad Men.” This season had a rocky start— Kalinda and her implausible, raunchy ex-husband, he of the perverse ice cream— but boy did it recover. The last two thirds of the season have been fantastic, a sprawling, entertaining, tightly plotted, non-didactic (yes, that is a “Mad Men” dig), razor sharp examination of power, ethics, and corruption, as serious and seriously entertaining as anything on cable.

Last night’s finale was a model “The Good Wife,” all misdirection, absurdity, ethical compromises, power plays and cynicism, a highly polished piece of drama, its arsenic coated in sugar. The day before Peter’s gubernatorial race begins, Alicia and Peter’s son Zach goes to early vote for his father and sees strangers suspiciously bringing in a ballot box with a broken seal. Alicia and her firm spring into action, facing off against Martha Plimpton, her newborn in tow, in a night court overseen by Denis O’Hare and his bad back. ("The Good Wife's" recurring guest stars are so great and so deep, Nathan Lane is like a distant memory, even though his excellent, restrained appearance extended over most of this season.) After Lockhart Gardner spend hours and hours arguing to throw the votes out, the votes are counted: if anyone stuffed the ballot box, it was Peter’s campaign. They then reverse course, spending hours and hours arguing to keep the votes, a lawyerly farce. The judge is finally convinced to include the votes, when Will—  who still has feelings for Alicia— sees video of Peter’s employees driving the ballot box up to the polling place. The votes are definitely fraudulent. Peter tells him to do what he wants with the information, and Will does nothing, looking out for Alicia, Diane, and his firm, rather than fairness or justice. Peter wins, because on “The Good Wife” cheaters often do.

Over this season Alicia herself has been corrupted— and not just because, as she probably fears, she wants Will so badly thinking about him makes her shiver alone in her apartment. Earlier this year, Alicia was made partner, but only to quell a rebellion among the associates, who, like Alicia, had been offered partnerships and then had those offers rescinded. Alicia alone was re-offered the position because of her name and because she was one of the ringleaders. Lockhart Gardner thought placating her would kill the outrage. Alicia took the promotion, screw solidarity . (Last week, as Alicia and Cary unionized a bunch of programmers for a case, Lockhart Gardner’s secretaries tried to do the same. Their demands were reasonable, but Diane and Will and David Lee serviced the leaders’ needs and ignored everyone else. Alicia seemed offended by the firm’s behavior, but, obviously, she’d been the last one to show them this strategy works.) At the end of last night’s episode, Alicia decided to go off and join Cary and the associate’s at their new firm anyway, trying to run away from her desire for Will as much as making a cagey career move.

Next season is now set up to be as combative and complicated as ever: Alicia, Cary, and their best, wife-killing millionaire client will face off against Will and a potentially Diane-less Lockhart Gardner in a state run by Governor Peter Florrick. Underneath the seemingly appropriate surface it's all inappropriate relationships, complicated loyalties, personal betrayals. I have no doubt "The Good Wife" will make the most of each and every one of them.