Jason Collins: Out of the NBA?

Jason Collins is the perfect man to be the NBA's first out player. First he needs a chance to continue his career 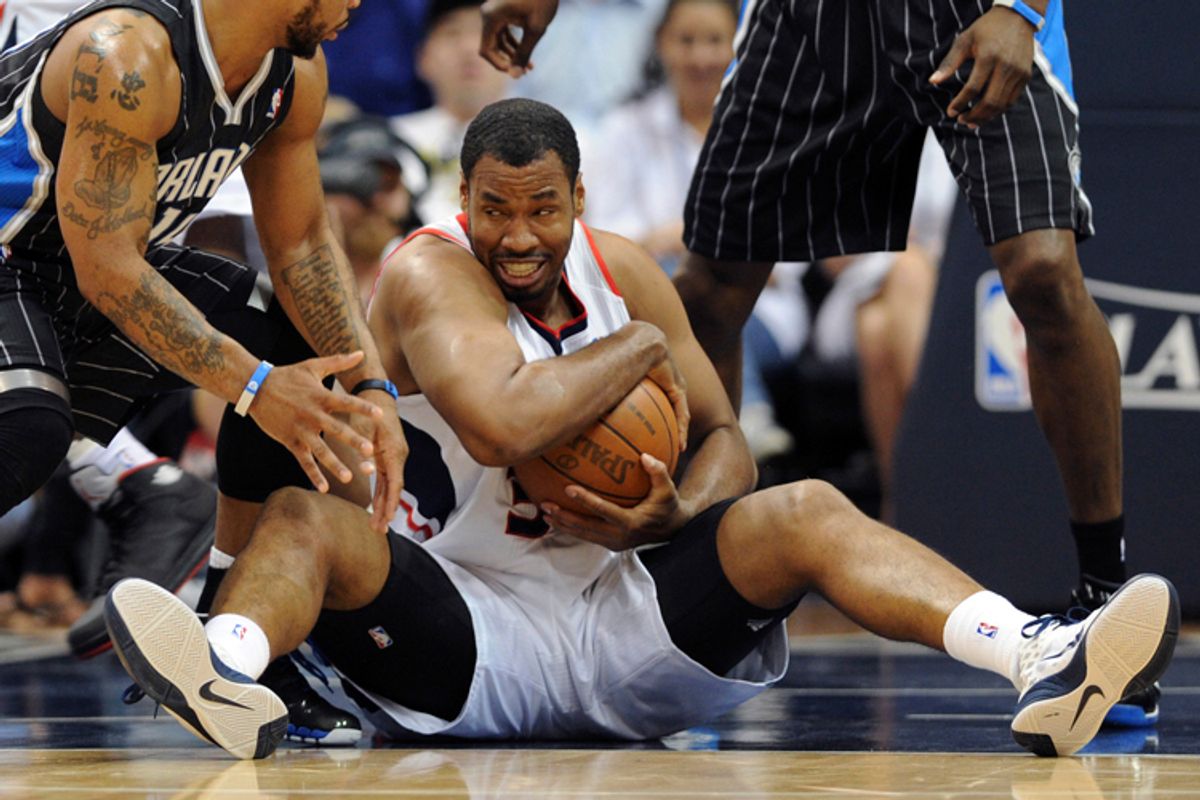 Yesterday, NBA journeyman Jason Collins became the first active American athlete in a major team sport to come out. There have been gay athletes before, whether active in individual sports, like Martina Navratilova; or retired from their league, like basketball player John Amaechi. But at the risk of reducing one man’s major life-decision to a sociology experiment, Collins is the test case everyone has been waiting for.

With his self-penned Sports Illustrated cover story, Collins forces a discussion about all the hypotheticals that have been bandied about for the last few years: How will players deal with a gay teammate in the locker room? How will fans feel about rooting for him? Will the insertion of an out athlete into the American sports mainstream change the discourse around gay rights in this country?

Luckily, Collins, in a sense, is the ideal candidate. And the NBA is the perfect choice for the first league to enter into this uncharted territory.

Basketball is a sport premised on familiarity. Small teams interact on the court in ways that depend, sometimes to a fault, on chemistry. And as much as players work with assigned positions (increasingly irrelevant in today’s game), first and foremost they have tendencies as individuals. That’s what it means to play with and against them; that’s what fans understand as they consume the sport. ESPN’s Kevin Arnovitz looked at the situation in terms of “self-expression," and likened Collins’s coming out to finding out “a bit of who [athletes] are as people,” which for him is “what you live for when you cover a sport, when the characters become fuller and the images become brighter -- when athletes become real people. This applies to the NBA more than  baseball or the NFL.

Basketball is built on personal relationships, or at least metaphoric approximations of them. Furthermore, careers are long and contracts guaranteed, meaning that a perfectly average player like Collins can stick around for years, bouncing from team to team and getting to know a large portion of the league personally (and be similarly known by fan bases). As Collins mentioned in his Sports Illustrated article/announcement, he’s the subject of a “Three Degrees of Jason Collins” game. Previously, it was a joke about his peripatetic career. Now, it’s an illustration of just how much Collins resonates as an individual throughout the league. To make matters even tidier, Collins heads into this summer looking to sign with a new team. There will be no surprises for his future team, teammates or fans. Jason Collins will show up in town as himself, with trust implicit.

The “I have [blank] friends” maneuver is quintessential post-PC bigotry. The other side of it, though, is the leveraging of personal relationships. Putting on a face on a type makes it harder to dismiss as an abstract concept or stereotype; trashing a person face-to-face is an entirely different enterprise. The way the NBA is constructed plays right into this strategy; Collins’ career gives him as many relationships to leverage as anyone in the league. When asked about Collins, Oklahoma City star Kevin Durant referred to NBA players as “kind of like a brotherhood,” followed by “I support him.”

That leap is typical of the way players view each other — even if, as Durant explained in the same interview, he doesn’t actually know Collins. The NBA is a league where highly personal relationships, or the possibility of them, are the basic currency of the profession. Even Golden State Warriors head coach Mark Jackson, one of the few voices who sounded a note of dissent, acknowledged this dimension of the league. "As a Christian man, I have beliefs of what's right and what's wrong," said Jackson. "That being said, I know Jason Collins, I know his family and I'm certainly praying for them at this time." The ambiguity of “praying” makes Jackson’s support ring somewhat hollow, but there remains the strong suggestion that he can’t help but root for the guy.

In a way, this is more about the league as a whole — its structure, its meaning, and its consumption — than it is Collins himself. That might seem odd, for a moment defined by one man’s willingness to make the world confront who he really is. The truth is, though, that Collins the basketball player is almost totally unremarkable, a big man who rebounds, defends and fouls. The Stanford-educated, Clinton-family pal is an interesting person, but that’s different from having much of an identity on the court. This somewhat generic quality, something of an anomaly in the NBA, means Collins offers up little baggage of his own.

What if a perennial All-Star had come out? It would be about a quasi-celebrity, not a working stiff. The effect would be more localized and nearly impossible to react honestly to. Collins is a Basketball Everyman. The reaction to him is indicative of how players feel about each other and it would seem, how they would view a gay teammate.

The league, too, can claim Collins as its own, as a victory for the sport’s forward-thinking, cosmopolitan image and the deep-blue leanings of NBA commissioner David Stern. Stern, in particular, must be thrilled. The NBA was one of the very first parties to issue a statement in support of Collins and this progressive moment stands in sharp contrast to the anti-labor, racially questionable treatment of the players during last season’s lockout. When Stern isn’t bent on the NBA’s total world domination, he’s driven by two contradictory drives: the union-busting lawyering where he got his start, or the political causes away from basketball that mean a lot to him. The former is where his lockout behavior came from, but it certainly came at the expense of the latter. Championing Collins lands Stern and the NBA once again on the side of social justice.

Ironically, the equation of gay rights with race issues is recurring complaint from some in the African-American community. Indiana Pacers forward David West called out Collins for writing “I'm a 34-year-old NBA center. I'm black. And I'm gay.” West called Collins use of his identity as “black” a “buffer,” and then declined to elaborate. Presumably for West, Collins is attempting to bring race into the picture when his cause would be served just fine without it. Of course, given the special place of the NBA — as both uniquely important in black culture and often seen as a reflection of its for a larger audience — that’s highly unlikely. For a lot of the country, Jason Collins will come to stand for black gay men.

The reaction to Collins was almost uniformly positive. What remains to be seen, though, is how exactly his life works out when he joins a new team, meets new teammates, and visits opposing arenas full of hostile, drunken fans. There’s also the chance that Collins may not get to discover what his future holds. If no team shows interest in him, his NBA career could end with this nearly heroic gesture. And while there’s the chance he could be blackballed, if his career is over, there could also be perfectly good basketball reasons for it.

Collins is 34 years old, and he’s only so useful on the court. But there’s also the possibility that he could be blackballed. Marc Stein, also of ESPN, polled teams anonymously about whether Collins would be back in the league next year. Teams were split, he reported on Twitter, but none mentioned weighing Collins’s sexuality as a factor.

Perhaps a team could sign him and be hailed for its bravery; the ugly end to this story would be team shying away from Collins because they don’t want the distraction or risk disharmony. Salary caps are tight but it’s also a weak free agent crop. In the end, it’s going to come down to whether or not Collins can still play — maybe an anticlimactic ending, but also that ideal of absolutely equal treatment. Then again, there was one team that pointed to Collins’s sparking personality and leadership skills as a reason to bring him on. Because to the NBA, that’s the kind of man Jason Collins is.

Bethelehem Shoals is an editor at The Classical and the founder of freedarko.com. Follow him on Twitter @freedarko.