"Love Is All You Need": Pierce Brosnan's lovely, lightweight rom-com 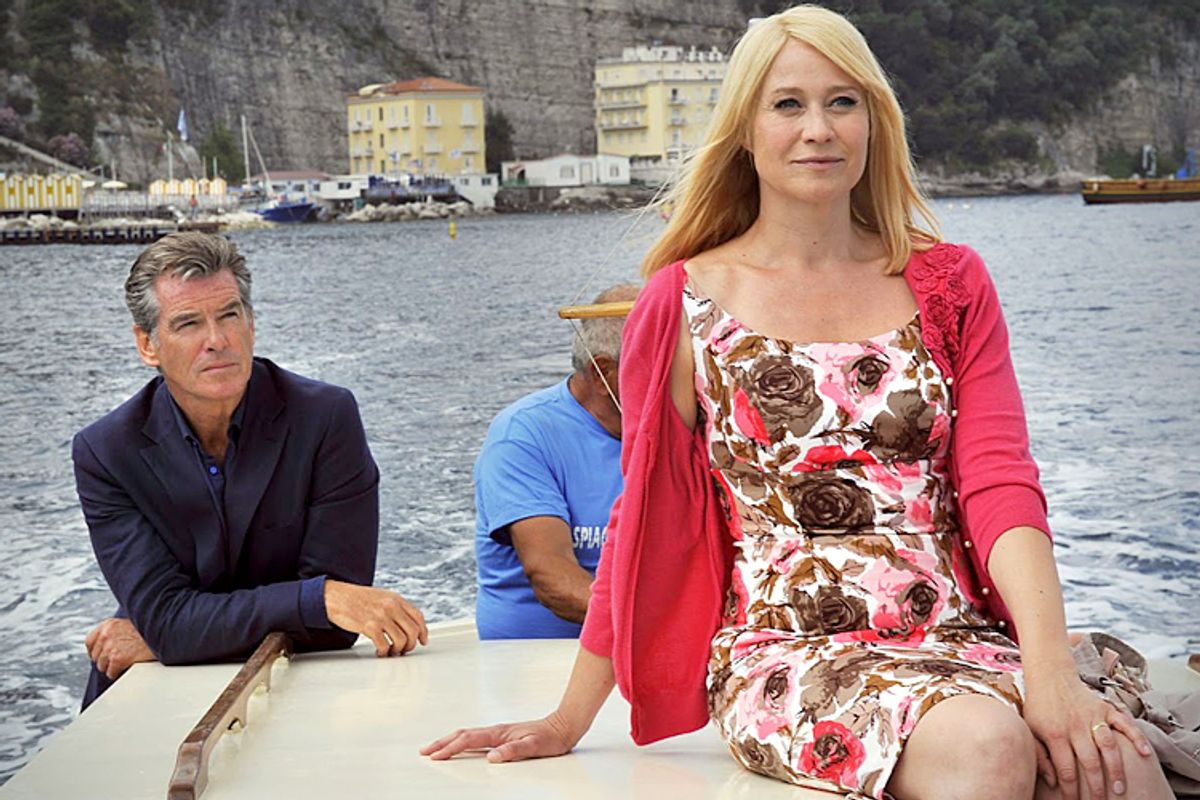 Pierce Brosnan and Trine Dyrholm in "All You Need Is Love"
--

Danish director Susanne Bier has spent her career stuck in the mushy European middle, halfway between Ingmar Bergman and Hollywood. She has a tremendous gift for character and storytelling, coupled with a penchant for preachy, melodramatic message delivery in the Paul Haggis vein, especially as her films have attracted a global audience. She won the foreign-language Oscar for the Euro-guilt odyssey “In a Better World” in 2010 – a picture that was conspicuously trying to be meaningful – and has made one semi-unsuccessful American venture, the 2007 “Things We Lost in the Fire,” with Halle Berry and Benicio del Toro.

So from a certain point of view, “Love Is All You Need,” a sun-splashed romantic comedy built around Pierce Brosnan and the wonderful Danish actress Trine Dyrholm, is the least ambitious and most formulaic film of Bier’s career. But I actually enjoyed it more than anything she’s made since “After the Wedding” and “Brothers” in the mid-2000s, and it’s an enormous relief to have a lightweight but non-insulting date movie to recommend in this arid season. This isn’t a movie that requires your full attention at every second – although when Dyrholm and Brosnan are on-screen, you won’t be able to look away – but it’s a nifty entertainment that’s always easy on the eyes and gains just a bit of dramatic weight as it moves forward.

I say this with respect and without snark: Bier and screenwriter Anders Thomas Jensen, her longtime collaborator, have identified a killer niche here, and I hope it pays off. “Love Is All You Need” is not just a rom-com but an upscale European rom-com aimed at women over 40. More than that, it’s a Mediterranean wedding comedy complete with beaches, lemon orchards, Tuscan sunlight, glorious Italian locations and romantic confusion galore. Suspense is minimal, to be sure, from the moment when ditzy, jilted Ida (Dyrholm) backs her boxy economy car into the Mercedes driven by garrulous Anglo businessman Philip (Brosnan). Yes, they begin with an argument and a misunderstanding; yes, they’re from different class backgrounds, she thinks he’s a dreadful person and he thinks she’s an idiot. We know all that! How long until they realize they totally can’t live without each other?

Not all that long, but there have to be numerous amusing pitfalls along the road to undying middle-aged love, of course. Philip’s a widower who has evidently taken some workaholic vow of celibacy (listen, it’s the movies) – but he’s also Pierce Brosnan, so he’s been fending off the advances of half the females in Denmark, including his nightmarish and larger-than-life sister-in-law, Benedikte (the amazing Paprika Steen, abducting the entire film and devouring it whenever she’s on-screen). Ida was recently jilted for a younger woman – while she’s going through cancer treatments! -- by her overweight, self-centered and thoroughly idiotic husband, Leif (Kim Bodnia, one of the hidden delights of Danish cinema), but she remains obscurely loyal to him for no good reason.

Oh, and did I mention that Philip, Ida, Leif and Leif’s hilariously awful new blue-eyeliner girlfriend, “Tilde from accounting” (Christiane Schaumburg-Müller), are all on their way to the same wedding in Italy? That’s because Philip’s son Patrick (Sebastian Jessen) and Ida’s daughter Astrid (Molly Blixt Egelind) are getting married, at the decrepit but enormous Italian villa where Philip and his now-dead wife lived years ago. Patrick and Astrid, a pair of beautiful, sprite-like beings, are deliberately not very interesting so we won’t lose sight of Brosnan and Dyrholm, and unless you text with your friends throughout the entire film you’ll immediately spot the reasons why this wedding may not go forward precisely as planned.

I suppose it tells you something about our world that on-screen Philip and Ida come off as an entirely age-appropriate pairing, whereas in reality Brosnan is 59 years old and Dyrholm 41. I grant you that Brosnan is not a typical 59-year-old male, but then again Dyrholm is a soulful and vulnerable beauty, with heart-stopping blue eyes that could paralyze a cobra. At any rate, watching these two consummate pros do their stuff as Philip and Ida move, offhandedly and incidentally, from casual acquaintance to profound connection to passion is very much worth the price of admission. There’s a scene when Philip surprises Ida swimming in the cove – she’s not just naked but completely bald, having removed her blonde “chemo wig” – that has pure magic in very few words, the kind of thing Bier can deliver beautifully when she’s not trying too hard.

All this fine character work and Morten Søborg’s blissful photography make for a highly enjoyable experience, but it’s fair to say that “Love Is All You Need” is more like the sketchy outline for a terrific rom-com than a work that rescues the genre. Of course we know how the story will end, generally speaking, but the dramatic-romantic payoff is pretty light, the story of Patrick and Astrid is unceremoniously abandoned, and Steen’s wily, sexy, abrasive drama-queen really doesn’t get enough to do. I’m rewriting this movie in my head – if Philip drunkenly sleeps with Benedikte, or almost does, and Ida finds out about it … OK, point being, romantic comedy with two irresistible actors that’s well above average and offers Susanne Bier a pathway out of virtuous tedium.

“Love Is All You Need” opens this week in New York and Los Angeles, with wider release to follow.

Love Is All You Need Movies Our Picks Our Picks: Movies Pierce Brosnan Romance Romantic Comedy