Property of Bangladesh building owner to be seized 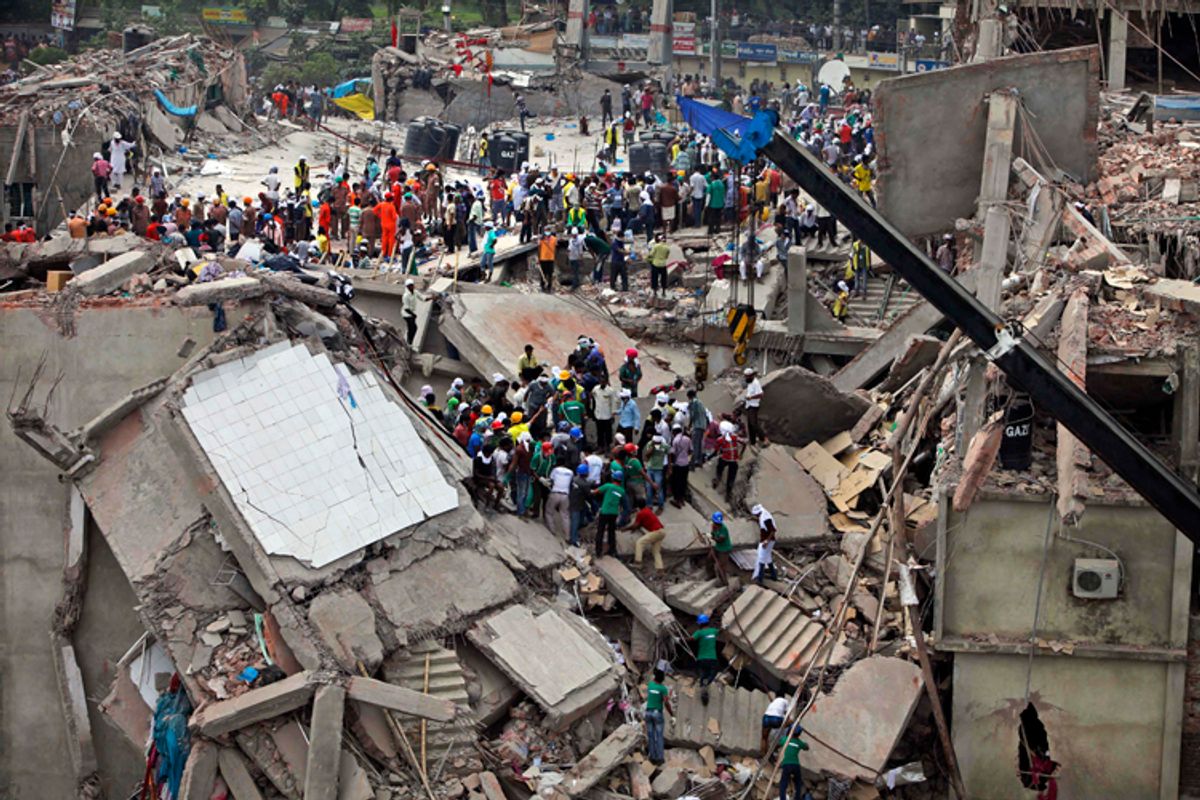 SAVAR, Bangladesh (AP) — A top Bangladesh court on Tuesday ordered the government to "immediately" confiscate the property of a collapsed building's owner, as thousands of protesters demanding death penalty for the man clashed with police, leaving 100 people injured.

A two-judge panel of the High Court also asked the central bank to freeze the assets of the owners of the five garment factories in the building, and use the money to pay the salaries and other benefits of their workers.

The order came after police produced the building owner, Mohammed Sohel Rana, and the factory owners in court. The order did not elaborate but it was implied that the salaries of the dead victims would be paid to their relatives.

At least 386 people were killed when the illegally constructed 8-story Rana Plaza collapsed on April 24. A total of 3,122 people were employed in the garment factories. It is not clear how many were working at the time, but some 2,500 people were pulled out of the rubble alive.

The collapse has become the deadliest disaster to hit Bangladesh's garment industry, which is worth $20 billion annually and supplies global retailers.

Rescue efforts have now been suspended and authorities are using heavy machinery to clear the broken and crushed concrete slabs to get to the bottom floor, where emergency workers expect to find many more dead bodies.

On Tuesday, clashes broke out again between thousands of garment workers and police in Savar, leaving at least 100 people injured, the United News of Bangladesh news agency reported.

It said police attacked with sticks when the workers, who were demanding death penalty for Rana and news of the missing people, tried to break the security cordon around the collapsed building. At least 22 of the injured were hospitalized, it said.

The protesters also smashed at least 20 vehicles in the area, the agency said.

Earlier, people had waited patiently at the site for news of missing relatives, holding their pictures and identity cards as they watched cranes lifting sections of ceilings and floors from the rubble. Emergency workers in hard hats used drilling and cutting machines to break up the slabs into manageable pieces.

Ratna Akhtar , looking for her husband at a nearby school ground, wailed: "Give me my husband back. At least I want to see his dead body if not alive."

Most of the bodies have been handed to families except 49 that have been kept at the morgue of state-run Dhaka Medical College Hospital for identification. Mahmud Ali of the Bangladesh Red Crescent Society said many more bodies are believed trapped under the rubble of the building, judging by stench of decomposing flesh still emanating.

Zillur Rahman Chowdhury, a Dhaka district administrator, put the number of missing at 100, based on the information received from the families of the missing.

But volunteers from the Social Welfare Club based at the Jahangirnagar University say the official tally is incomplete because people have little faith in the government and don't bother reporting their loss.

Ahsan Imu, a volunteer at the club, said that based on information gathered from families at the site at least 1,000 people may be missing, which if true would put the death toll at 1,400. However, he cautioned that there may be some duplication in the list.

On Monday, a magistrate give police 15 days to interrogate Rana, the building owner. He was arrested on Sunday in a border town as he tried to flee to India. He is being questioned on charges of negligence, illegal construction and forcing workers to join work. The crimes he is accused of carry a maximum punishment of seven years. More charges could be added later. Rana had permission to build a 5-story building but added three more floors illegally.

The death toll has surpassed a fire five months ago that killed 112 people and brought widespread pledges to improve worker-safety standards. But since then, very little has changed in Bangladesh.

Bangladesh's garment industry was the third-largest in the world in 2011, after China and Italy, having grown rapidly in the past decade.

Among the garment makers in the building were Phantom Apparels, Phantom Tac, Ether Tex, New Wave Style and New Wave Bottoms. Altogether, they produced several million shirts, pants and other garments a year. The New Wave companies, according to their website, make clothing for several major North American and European retailers.

Britain's Primark has acknowledged it was using a factory in Rana Plaza. It said in a statement Monday that it is providing emergency aid and will pay compensation to victims who worked for its supplier.

"Primark notes the fact that its supplier shared the building with those of other retailers. We are fully aware of our responsibility. We urge these other retailers to come forward and offer assistance," it said.

Canadian company Loblaw Inc., which also got its Joe Fresh clothing line made in Rana Plaza, said Monday it will ensure that victims and their families "receive benefits now and in the future."

Spokeswoman Julija Hunter said the company is still working out the details, but plans to deliver support "in the best and most meaningful way possible."

Wal-Mart said none of its clothing had been authorized to be made in the facility, but it is investigating whether there was any unauthorized production.