Who is the real Anthony Weiner?

He's played the role of Ed Koch-like moderate and Alan Grayson-like liberal. Which will we see next? (UPDATE) 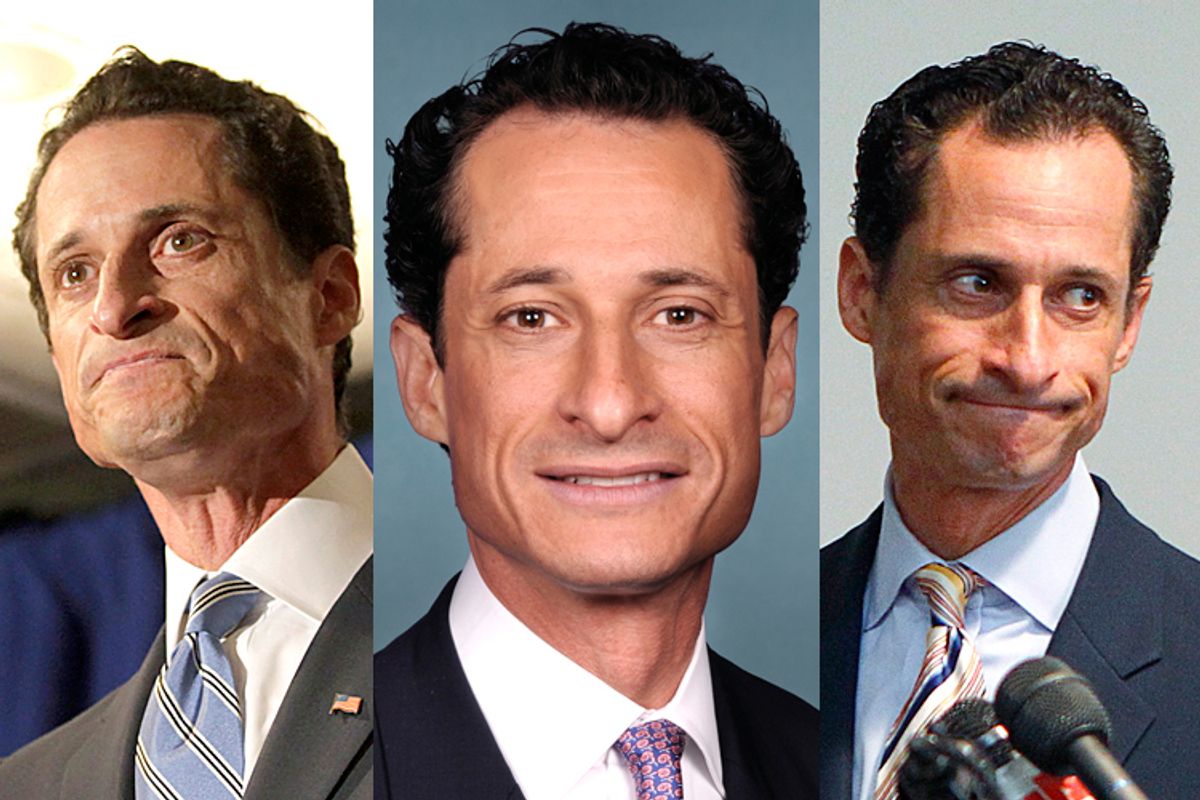 The news that Anthony Weiner raked in serious cash last year as a corporate consultant – an ambiguous job that seems a lot like lobbying -- may seem jarring to national observers who viewed him as a liberal firebrand. But, playing a loud progressive on cable TV doesn’t necessarily make you one. And for Weiner, this stint as not-technically-a-lobbyist signals merely the latest turn for a politician who's craftily straddled the line between outer-borough Ed Koch-style moderation and Alan Grayson-style liberal activism.

The question is how much longer he'll be able to straddle.

Weiner's professional political life began in 1991, when he ran his maiden race for City Council. As Steve Kornacki detailed for Salon, he won a long-shot bid as a 27-year-old, in part by anonymously sending mailers linking his opponent to African-American figures (namely, Mayor David Dinkins and Jesse Jackson) unpopular in his white district. Appealing to the white ethnic constituency, he cultivated an identity in office as an outer-borough moderate, focusing on issues like graffiti, airport regulations and fire alarm boxes.

Fast-forward past his ascension to Congress in 1998, to his first mayoral bid in 2005 -- and the carefully crafted persona was still that of moderate Tony Weiner. Gabbing that year about his route to victory in the race for City Hall, he told New York magazine, “There’s no one else from Queens or Brooklyn. You’re not splitting that outer-borough moderate vote anymore.“ Policy-wise, he would inveigh more against scourges like “deluging outer-borough businesses with tickets” than engage in the kinds of ideological fights for which he'd later be famous.

Weiner would lose that year’s Democratic primary (despite out-performing most expectations), and immediately set his sights on the 2009 race. That time around, his appeal was that he was a brash insurgent who would stand up to omnipotent incumbent Michael Bloomberg, who had just changed the law to enable himself to run a third time. This new iteration as the anti-Bloomberg took the form of blasting the mayor for such apostasies as “adding workers to the city payroll despite huge budget deficits and for spending freely.”

But after Bloomberg’s campaign anonymously leaked unflattering stories in the New York Post about Weiner’s efforts to assist fashion models and his penchant for missing votes while playing hockey (along with other, more high-tech tactics), the congressman came down with a case of nerves and bowed out.

It was after this comedown from the aborted race -- amid a struggle for attention and relevance -- that Weiner's liberal lion persona, with which so many non-New Yorkers now associate him, would be cultivated. As Kornacki detailed:

The debate over health care was heating up and cable news producers were eager to book anyone with a title and an ability to convey a strong point of view. Weiner launched a passionate—not to mention completely theoretical, thoroughly unproductive and ineffective—campaign for a single-payer healthcare system. In reality, he was nowhere near the negotiations. But the purity of his position and the way he argued it were compelling.

One appearance led to another, and soon he was a prime-time regular. Nationally, liberal activists took notice. Bloggers began saluting him for his “courage” and “backbone.”

The congressman would continue to be a staple on cable news after the Obamacare debate concluded, railing against Bush tax cuts, screaming about 9/11 legislation, and arguing with other guests (and hosts). But while this new liberal persona boosted his name recognition nationally and positioned him well with donors, Weiner did not forsake his “outer-borough moderate” tag altogether. Instead, he sought to have it both ways: shouting down Fox News’ Megyn Kelly on healthcare and tax cuts for a national audience, and playing a bike lane-hating pro-Israel hawk back in the district.

This political double-life is not particularly difficult to execute as a safe member of the House. Without a press corps dedicated to them, legislators can direct their press coverage in many ways: by issuing press releases on whatever they like to whomever they like, calling reporters when they choose, and generally laying low when they see fit. They typically engage in party line votes, so their voting records are not scrutinized. And they face few real decisions that are forced upon them. In other words, Anthony Weiner was free to be one thing on cable TV, and something entirely different when doing local press availabilities or pitching small stories to Queens papers.

The inability to change his image, chameleon-like, hour to hour, and please everyone means mayoral candidate Anthony Weiner may have to decide who, once and for all, he is. First, he was a working-class moderate. Then he was a working-class moderate while also a liberal darling. Now he’s a corporate adviser, with clients like law firms and biofuel firms (and that's just what he’s disclosed). What will the next formulation of Anthony Weiner be? Like many politicians, the answer is probably: whatever it takes to win.

To that end, polls suggest that with front-runner Christine Quinn appealing to Manhattanites and so-called elites, there’s room in the race for an opponent to draw votes from Queens and Brooklyn. Is this particular dynamic lost on Weiner? Despite having moved to Manhattan with his family, and risen to fame as a liberal fighter on national issues, he told the Times on Tuesday: “I am always going to be an outer-borough boy at heart.”

Update: Rep. Weiner contacted Salon to take issue with the description of the 1991 incident, calling our version "completely made up." He says he anonymously distributed mailers, not posters (as initially stated above), and disputes the characterization of David Dinkins and Jesse Jackson as "African-American figures." Of the leaflet, he says it was "a mistake to send it" and "a mistake to send it anonymously," adding, "this I regret." The post has been updated to indicate that he sent "mailers," and to specifically identify Dinkins and Jackson as those referenced in them.