"Gang of Eight" freezes out gay immigrants in reform bill 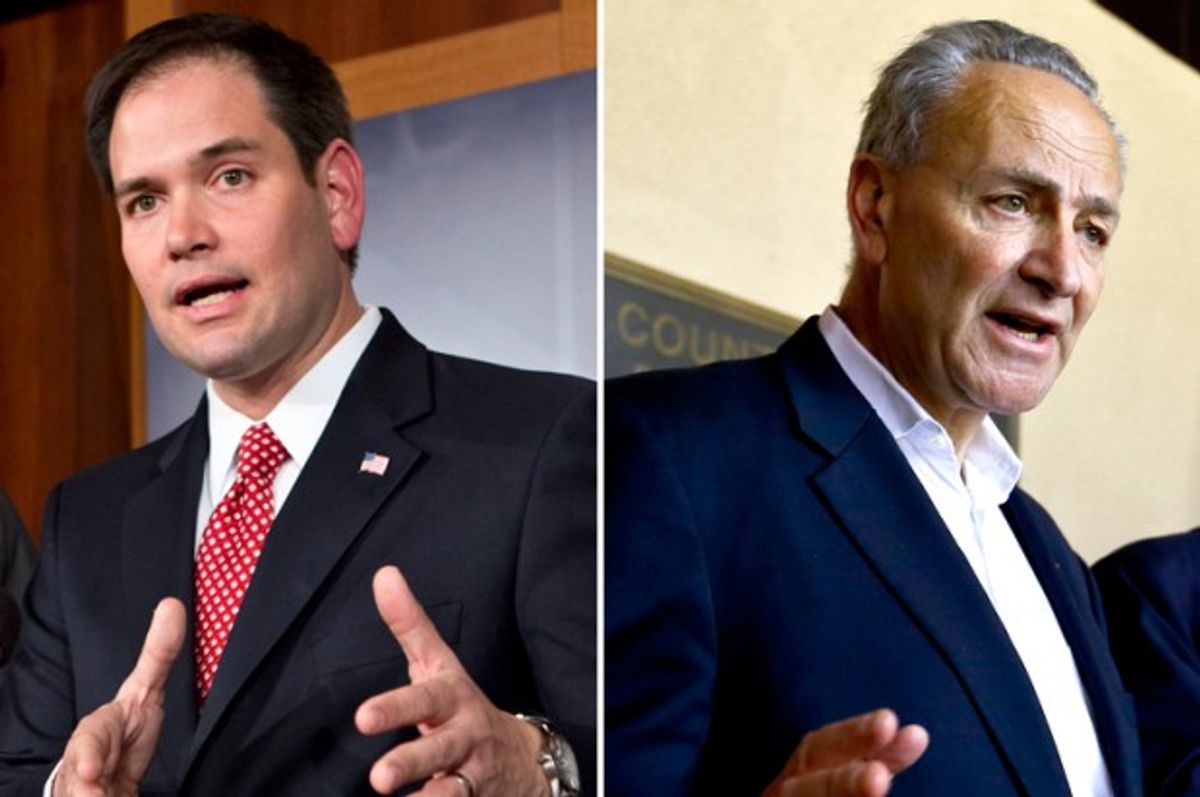 Much has been said about the 844-page bipartisan immigration reform package introduced in April. Some Republicans have called it "amnesty," while many immigrant rights groups view it as unnecessarily punitive. But no one on either side of the debate has called it "gay friendly" -- because it isn't.

The measure excludes a provision to allow American citizens to sponsor their same-sex partners for legal permanent residency. To do so, Republicans among the "Gang of Eight" allege, would be legislative suicide.

“There’s a reason this language wasn’t included in the Gang of Eight’s bill: It’s a deal-breaker for most Republicans,” Senator Jeff Flake (R-AZ) told the New York Times. “Finding consensus on immigration legislation is tough enough without opening the bill up to social issues.”

Flake's "social issues" refer, more directly, to the very existence of gay immigrants and their families, a reality that many Republicans and Democrats seem eager to overlook in the name of political expedience.

As the Times reports:

Gay advocates were sharply disappointed to find that same-sex couples were excluded from the legislation, since the Democrats who wrote it included two of their most consistent champions, Senators Charles E. Schumer of New York and Richard J. Durbin of Illinois, the second highest-ranking Senate Democrat. Senator Patrick J. Leahy of Vermont, the Democrat who is chairman of the Judiciary Committee, where the bill is under consideration, has offered, since as far back as 2003, a separate measure that would allow immigrants in long-term same-sex relationships to obtain residency with a green card.

But in the lengthy closed-door negotiations that produced the overhaul proposal, the four Republicans in the bipartisan group made it clear early on that they did not want to include such a hot-button issue in a bill that would be a challenge to sell to their party even without it, according to Senate staff members. The Republicans are Lindsey Graham of South Carolina, Jeff Flake and John McCain of Arizona, and Marco Rubio of Florida.

Despite Flake and other Republican's vocal opposition to a gay-inclusive reform package, Leahy may be the group's best hope at passing a fair deal for all immigrants, as previously reported by Salon:

Now that the Gang of Eight has weighed in, the next stop for making changes to the bill will likely be the Senate Judiciary Committee, which is chaired by Sen. Patrick Leahy who is also holding an informational hearing on the bill Monday. Leahy, a chief co-sponsor of legislation that would allow U.S. citizens to sponsor their same-sex partners for residency (the Uniting American Families Act), is widely expected to offer the provision as an amendment to the immigration bill once it reaches his committee.

If the other nine Democrats on the committee follow his lead, the amendment should pass with ease. But all eyes will be on Sens. Dick Durbin, Dianne Feinstein and Chuck Schumer. Feinstein is the only Democratic committee member who’s never signed on as a co-sponsor of UAFA, though she has co-sponsored a bill that would repeal the Defense of Marriage Act — one way, among others, to alleviate this immigration inequity for LGBT citizens. Durbin and Schumer, meanwhile, represent two key members of the Gang of Eight that excluded same-sex couples from the original immigration bill.

When Leahy reintroduced UAFA this year with Republican co-sponsor Sen. Susan Collins, he noted that any immigration bill that comes through his committee “should recognize the rights of all Americans, who have just as much right to spousal immigration benefits as anybody else, straight or gay.”