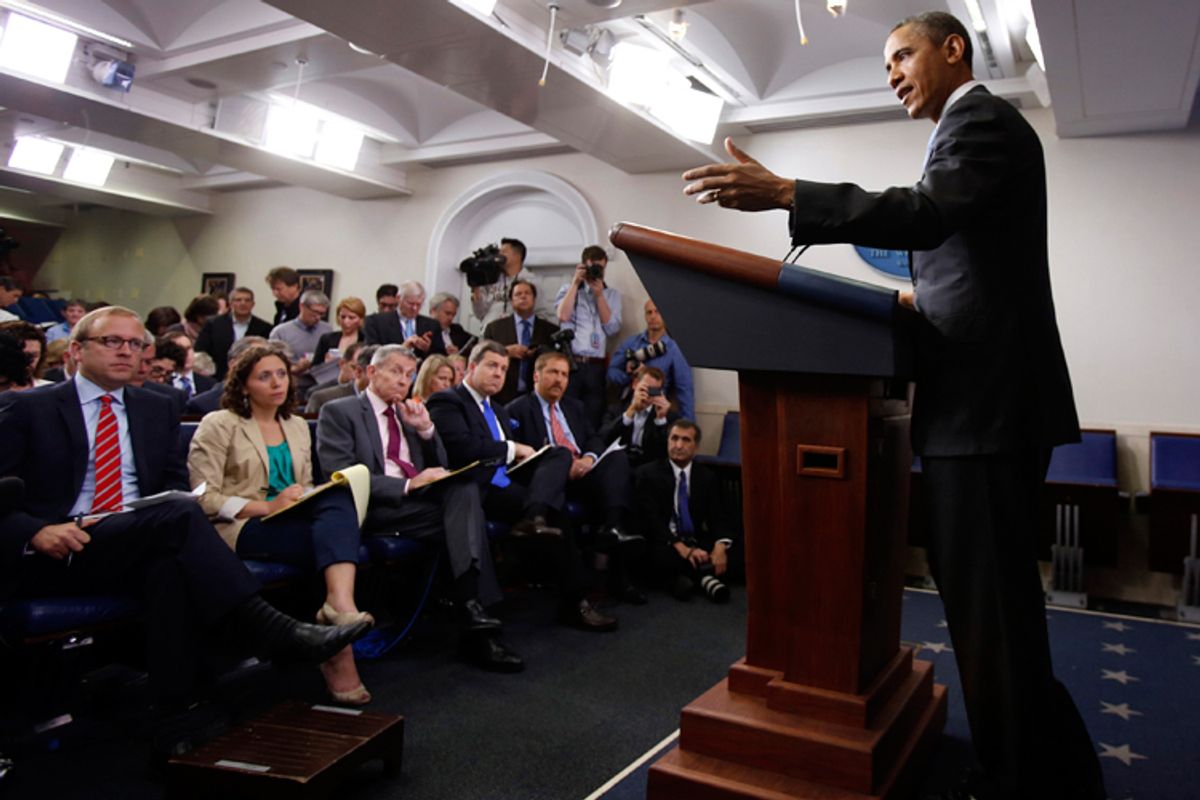 Barack Obama did a press conference yesterday! He hardly ever does press conferences, because he hates the press and thinks taking random open questions from them is a waste of everyone's time, and that makes the Washington press corps very unhappy. They think he is dodging their tough questions. You would think that they would be quite pleased when he decides to have a press conference, but some of them were still kind of cranky!

Like Politico's Glenn Thrush, who was mad that the press conference was announced only 90 minutes before it happened. Thrush said the whole game is rigged.

Then he got in a funny argument with Dan Pfeiffer.

So the president, in his first term, did fewer press conferences than Bush did in his first term, and Bush was famous for not doing press conferences so that he didn't have to explain or defend himself. Obama, though, is capable of defending himself without a script, even if he frequently falls back on increasingly grating clichés. He simply skips them because they really are a waste of everyone's time.

So Obama's perception of the elite political press is that they're a bunch of shallow whiny babies. When they are given a chance to directly question him they ask if he has "juice" left. His critique of the Washington press corps would seem to be pretty accurate. Elite professional political reporters have no grasp of policy and shallow, cable news-warped conceptions of politics. They pay attention to Sunday shows and take what Lindsey Graham says seriously. Obama is a frequent press critic, actually, though he often couches his more biting critiques as jokes. At last weekend's White House Correspondents' Dinner he (accurately) mocked Maureen Dowd for her column suggesting that he could get his way more often if he wanted it more.

Obama's sarcastic dismissal of the Beltway press is basically entirely justified. They jump at every idiotic pseudo-controversy and they always hold both sides responsible for "dysfunction" in Washington. No one at yesterday's press conference asked about jobs or labor. These are residents of the bubble and Obama does not care for the bubble.

The interesting question (someone should have asked it yesterday!) is whether Obama's experience with the political press has had any effect on his administration's awful treatment of people who leak to national security journalists. The administration is brutal on a historic scale to whistle-blowers and is currently, in its prosecution of Bradley Manning, attempting to establish the precedent of charging someone who leaks to any journalist with the capital offense of "aiding the enemy." Asked by the judge hearing the Manning case whether the military would've brought the same charges had Manning leaked to the New York Times instead of Julian Assange, prosecutors said yes. The Obama White House is charging leakers with violating the Espionage Act, a ridiculously broad World War I-era law that theoretically makes anyone who leaks anything the equivalent of an enemy spy.

National security journalists can be just as careerist and obnoxious as D.C. political journalists, but they are also much more likely to do the old-fashioned public service journalism thing where you expose the powerful and hold them accountable for their actions. Many of them are doing, in real life, the "afflict the comfortable" thing people like Chuck Todd think they are doing when they ask the president "what about Benghazi."

When the administration promised to be the most transparent in history, everyone should have laughed (some did), because the trend line on executive transparency has only moved in one direction since the First World War. But while shutting out the juvenile Beltway elite political press is harmless (or possibly beneficial for the country as a whole) the persecution of people trying to expose the scale and scope of the secret national security state to reporters is a legitimate threat to the right of the American people to know what the nation's intelligence agencies and military are doing in our name, around the world and here at home.

If journalists are doing their jobs correctly, of course they should be annoying and even enraging the president. But annoying the president isn't in and of itself proof of a job well done. If a president and his administration only ever has to deal with the sort of people who read Playbook and think in terms of "juice," it must be easier for them to convince themselves that they're not doing any real harm by attacking the foundations of American intelligence reporting. No one but the current administration is to blame for the war on reporting, but if the president thinks modern journalism serves no broader social purpose, the White House press corps reliably fails to dissuade him of that impression.