The wealthy corporate titans behind Fix the Debt are using a loophole to avoid paying taxes, a new report charges 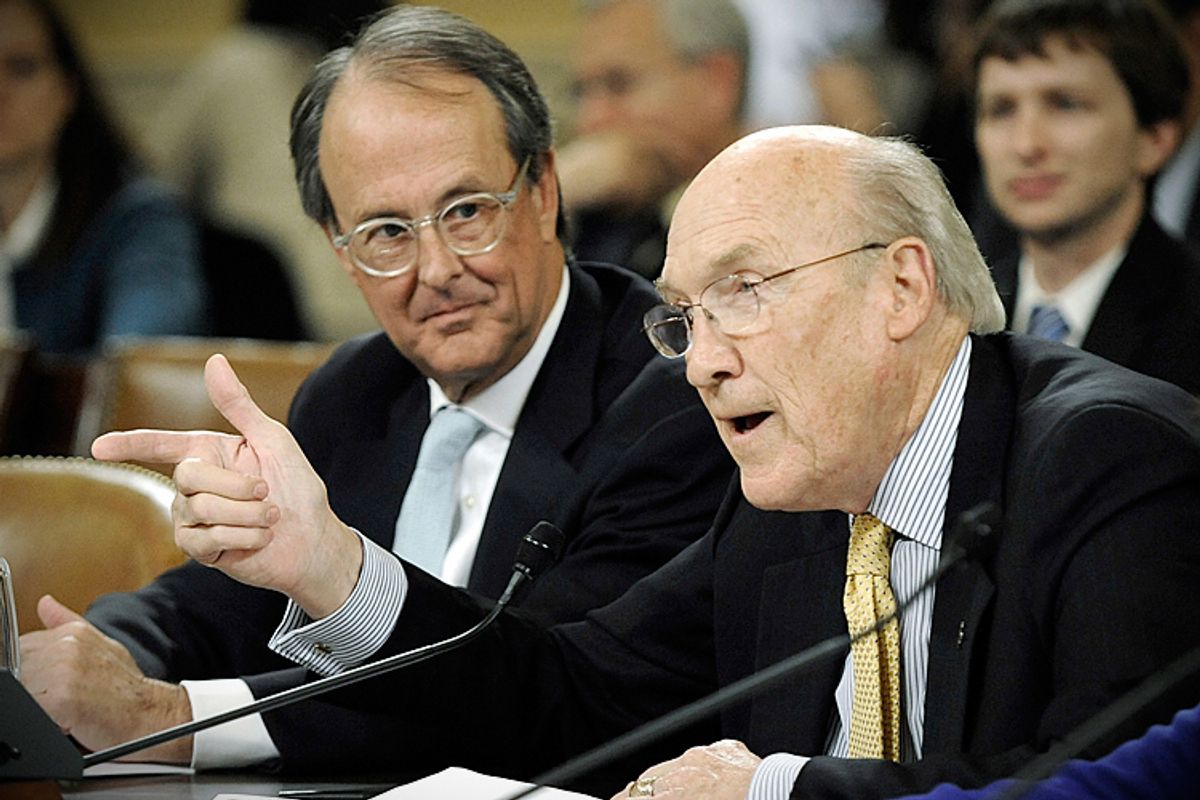 The major corporations backing a group founded by the pro-austerity icons Simpson and Bowles take advantage of a loophole to avoid paying taxes on some of what they pay their CEOs, according to a new report.

The report, from the liberal Institute for Policy Studies, finds that between 2009 and 2011, top executives at the 90 publicly held corporate members of the Fix the Debt coalition raked in at least $953 million -- and as much as $1.6 billion -- through the “performance pay” loophole, which counts some executive compensation as a tax-deductible business expense, instead of a salary. Fix the Debt, founded by Alan  Simpson and Erskine Bowles, is one of the many groups tied to Wall Streeter cum policy entrepreneur Pete Peterson, who has spent the last 20 years trying to reduce the debt, in large part through cuts to programs like Social Security and Medicare. The group has attracted some of the largest corporations in the country as sponsors, as well as former lawmakers, giving it serious clout in Washington.

Liberal critics have long charged that the group and others like it are little more than corporate fronts that use the language of the deficit as a pretext to slash social safety programs while preserving policies favorable to the wealthy. And the IPS report charges hypocrisy in the group's corporate members depriving the U.S. Treasury of revenues on executive pay while at the same time demanding vulnerable Americans make sacrifices through reduced deficits.

"The very taxpayers who pay into and depend on these programs and benefits are subsidizing excessive compensation for the top executives of Fix the Debt member corporations and other large firms," the report's authors wrote.

In 1993, Congress passed a law that prevented corporations from counting executive pay above $1 million as business expenses, which are deductible, but corporations found a way around it with the "performance pay loophole."

For instance, United Health, the nation’s largest HMO, paid CEO Stephen Hemsley $199 million between 2009 and 2011. Of that, at least $194 million was fully deductible “performance pay," according to the report, which works out to "a $68 million taxpayer subsidy to United Health Group -- just for one individual CEO’s pay."

On average, the report found that the corporate members of Fix the Debt exploited the loophole to the tune of $1.5 million per executive.

"If Fix the Debt CEOs were serious about addressing our nation’s fiscal challenges, they would push for greater fairness in the tax code, including the elimination of entitlement programs benefiting CEOs like the 'performance pay' loophole," the authors wrote.

Indeed, as Mark Schmitt wrote for Next New Deal, Fix the Debt also seemed to favor extending the Bush tax cuts, even though they helped balloon the debt by depriving the Treasury of billions of dollars in tax revenues. To be fair, the Simpson-Bowles plan also included tax increases on the wealthy, and while liberal critics trashed it at the time, it raised more revenues than President Obama is likely to be able to get through the current Congress.

And the amount of money lost to the loophole is minuscule compared to the cost of social safety net programs, but the report nonetheless raises important issues about fairness in Washington's zeal to cut the debt.