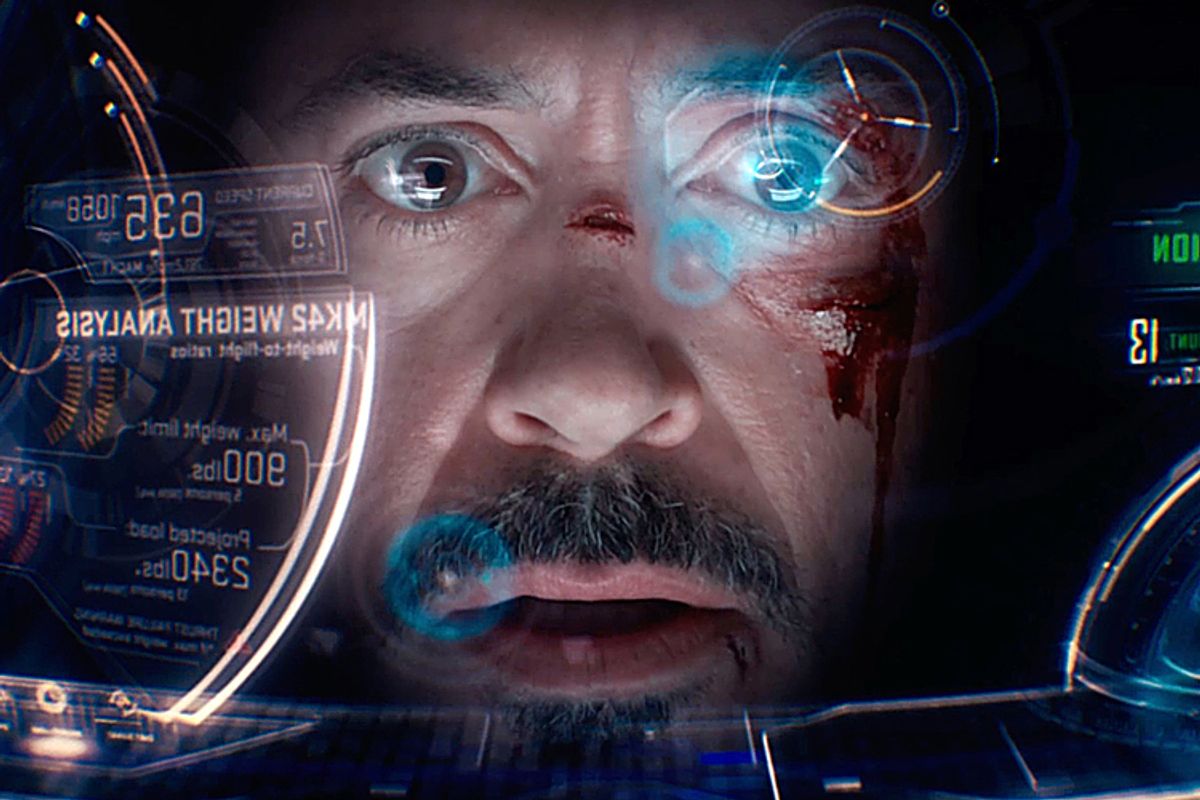 As far as bored and cynical, playing-out-the-string comic-book action sequels go – hey, “Iron Man 3” is a pretty good one! The third and purportedly last of Robert Downey Jr.’s adventures as the armor-clad but increasingly vulnerable Tony Stark features one of Downey’s most nuanced performances, arguably a lot better than the movie around him, and keeps him separated from the physical and emotional protection of the Iron Man suit for extended periods. There are several good supporting performances, not even including Gwyneth Paltrow’s abdominal muscles, which is really all I can remember about Pepper Potts: Guy Pearce, as a nerd genius spurned by Tony Stark years earlier who comes back for revenge; Ben Kingsley, most delicious of all, as a shadowy techno-Osama known as the Mandarin.

One-time action-movie wunderkind Shane Black (of “Lethal Weapon” fame), who directed the film and co-wrote the screenplay with Drew Pearce, strikes a tone of pseudo-edgy frat-boy black comedy that’s so retro it’s almost charming. (This movie is simultaneously a conclusion and a comeback story; Black hasn’t made anything in Hollywood since directing Downey in “Kiss Kiss Bang Bang” in 2005.) Ludicrous and overblown as the whole thing is, it comes with a half-convincing tone of elegy: Memento mori, dude! All things must pass, even idiotic but enjoyable action trilogies about a billionaire with a flying suit of armor. After its own weird Shane Black fashion, “Iron Man 3” is a story about a boy growing into a man, losing the bachelor pad and the sports car, and becoming a husband and a father – though not necessarily in that order, and with a whole bunch of chaotic ass-kicking to receive and administer along the way.

On one hand, story in a comic-book film is largely a pretext for showing off the technology and moving the characters into spectacular confrontations. On the other hand, plot is a difficult thing to get right in a movie like this, because it needs to employ familiar tropes – a hero, a villain, a globe-threatening crisis and a couple of unexpected switches – while not seeming entirely derivative. Black and Pearce get a solid B-plus here for Kingsley’s mysterious Mandarin, who looks vaguely Middle Eastern but talks with a possibly put-on down-home accent, and hacks into cable TV transmissions anytime he wants to deliver his dire messages to the world. He has some revenge agenda directed at the sourpuss Republican-looking president played by William Sadler, and one of the faintly seditious touches in Black's work is that it's nearly impossible to feel any sympathy for that guy. Then there are two figures out of Tony Stark’s past, a cutting-edge brain researcher called Aldrich Killian (Guy Pearce), snubbed by Tony at a Y2K New Year’s Eve party, and a long-ago ex-girlfriend played by Rebecca Hall, who may never have gotten over him.

Throw in a series of bombing attacks in which no traces of actual bombs are ever found, along with a dramatic helicopter attack on Stark’s Malibu clifftop home that nearly finishes off both Tony and Pepper – who still seem, as throughout this series, more like brother and sister than anything else – and we’re set up for a decent chase mystery. A small town in Tennessee is almost entirely destroyed in a showdown between Tony and a battalion of the Mandarin’s weaponized super-soldiers, Iron Man has to save a dozen or so people as they plunge through space from an exploding airplane (OK, it’s actually Air Force One), and almost everyone in the movie winds up aboard an oil tanker for a nonsensical last battle in which any connection to cinematic space and time is abandoned. I’ve already been asked whether the PG-13 “Iron Man 3” is appropriate for younger kids. It depends on the kids, of course, but my hunch is that my 9-year-olds would find it incomprehensible both in tone and content, and also excessively violent.

While the airborne rescue may be the best action sequence in this trilogy (and the oil-tanker battle may be the worst), both Black and Downey are at their best when Tony is stranded in rural Tennessee at Christmastime, with no working Iron Man suit, forced to team up with a fatherless budding techno-prodigy of 9 or so (played by Ty Simpkins). “That’s what dads do,” Tony tells the kid, “they leave. There’s no call to be a pussy about it.” But of course we understand that Tony’s bionically altered heart has been touched by this kid, who correctly diagnoses that Tony is suffering from a panic disorder and possible PTSD, after those events in New York with the wormhole and the aliens and so on.

That is, I guess, a reference to events in last summer’s huge hit “The Avengers,” a movie I saw and wrote about but now can only barely remember, even after reading a plot summary. Even if this movie marks the conclusion of the Iron Man franchise, at least in this iteration, we are assured at the end that “Tony Stark will return,” no doubt in the “Avengers” sequel planned for the summer of 2015. And so the promised maturity of the comic-book universe remains theoretical, somewhere beyond the distant horizon. It may be time for Tony Stark to grow up, get help and move on, but his fans don’t have to.