The persistence of Carson Daly: How an MTV personality became face of "The Voice" 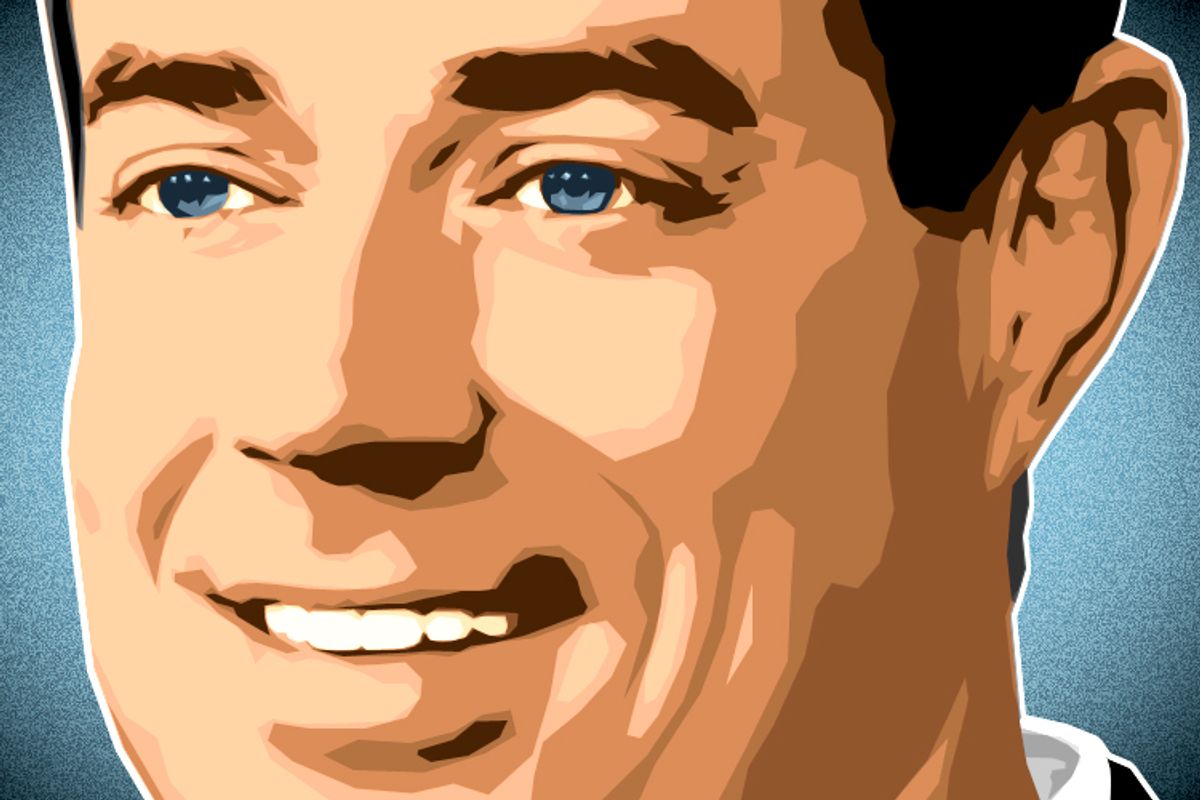 Given the popularity of the after-school program, in which Daly introduced a countdown of hit music videos and interviewed musicians, all while tweenage girls shrieked in the studio, the joke was lost on no one. Amid the candy-colored universe of Britney videos, girls who wanted to meet Justin so bad, and in-studio Mariah breakdowns, the stolid host seemed ... well ... a bit dull.

Maybe there's a reason why vanilla is such a popular flavor. Carson Daly -- a massive tool, we all agree -- is the MTV star who survived. Sure, you probably don't watch his late-late-night talk show "Last Call." But somebody does: It was recently renewed for a 13th season. He's the host NBC turns to on New Year's Eve, to counter first Dick Clark and now Ryan Seacrest on ABC. When speculation grew that Matt Lauer was on the outs on "Today," Daly's name not only made the list of potential replacements, but he seemed to be trying out, subbing for Willie Geist during the 9 a.m. hour and joining the panel of "Today's Professionals."

And Daly's also the emcee trusted with NBC's one legitimate prime-time smash, tasked with managing the bickering, preening celebrity judges on "The Voice," the network's seemingly indestructible answer to "American Idol."

All of which makes one say: Huh? Who orders vanilla anyway? At a time when the original MTV VJs are hawking a nostalgic oral history about the '80s, when Tabitha Soren (once considered network-news anchor material) and other '90s faces mock two decades of their irrelevance on "Portlandia," when no one has heard from Kennedy or Jesse Camp for ages, how has Carson Daly survived so long? Indeed, Daly has not only endured, but by just showing up to work every day, he's become one of the most public faces of NBC -- oft compared to Ryan Seacrest, but somehow seeming less unctuous, less annoyingly ambitious, and, dare we say, likable.

According to Daly, it's mainly luck. "I moved to New York in 1999, a year before 'TRL' got popular," he said. The show, which debuted in 1998, hit its stride with the Britney/Backstreet/*NSync teen-pop explosion of 2000. He had been a local radio DJ in Los Angeles, which he describes as "the pinnacle of radio."

"It all seemed like Monopoly money: I'm going to drink and party on someone else's dime. I wasn't thinking strategically."

Yet going out at night with fellow MTV personalities -- as well as the fact that "TRL," with its heady mix of live interviews and video snippets, was buzzier than most of the day's lineup -- got him thinking that way. "Three years into MTV, I realized that 'TRL' had become this cultural phenomenon," he said. "I looked at my career and thought, 'Oh, shit, now I've got something to lose.'

"When I used to go out with ['MTV Jamz' personality] Bill Bellamy, people would say, 'You're MTV's Bill Bellamy!' But people like Matt Pinfield or Jon Stewart had created their own branding autonomy. I don't want to be 'MTV's Carson Daly.'"

Like Pinfield (an MTV personality who got involved in the business side of music for Columbia Records) or Stewart (the "Daily Show" icon whose career was kickstarted by MTV back in the 1990s), Daly began to look for a way out, a life beyond on-the-fly interviews with Britneys manquée. MTV offered him a syndicated radio show and he turned it down, obtaining a deal with ClearChannel instead. With that deal, "I could start the exit program of my association with MTV," he said.

Not that NBC, where he launched "Last Call" in 2002 at the peak of "TRL's" prominence, has been entirely smooth sailing. The early days of the show forced someone who'd never been funny into the position of late-night host -- traditionally a job reserved for a comedian. He had the problem of looking like the most anodyne guy in his space. He looked like, yes, a massive tool.

"The MTV crowd is a pretty discriminating crowd," said television historian Tim Brooks, "and he has shown he can carry a show like that. Since that day, though, he's blanded himself. Maybe that's going to a broadcast network."

Daly claims that executives presented him the 1:35 a.m. time slot with the caveat, "It's probably way beneath what you want to do," but its wee-hours airtime has both allowed him to experiment and made him vulnerable. In early 2010, as Conan O'Brien and Jay Leno negotiated with NBC over who would get the 11:35 time slot, "I got a call saying my fate was in Conan's hands. I was going to be pushed off the schedule." (O'Brien chose to leave NBC rather than disrupt the existing order.)

This was the period in which Daly decided to live as though his career were dying. "If I'm going to lose my job, I'm going to do 'Last Call' the way I want. Fuck it!" Daly said, comparing the post-2010 show to Dave Attell's experimental "Insomniac," radio's "This American Life" and PBS's "Charlie Rose." The show, which had previously and uncomfortably experimented with Daly sitting behind a desk like some junior Leno, now prominently features low-wattage music stars. "We're not going to fight with Leno and Kimmel for main acts. Fuck it. I'm gonna focus on new music and do it for the catering budget of other late night shows," he said.

Daly now works for the same network as Fallon, his one-time "SNL" mimic. He claims the two would play Golden Tee at bars in recent years. "If I'm dry, vanilla, uninteresting -- whatever," he said. "If you can't laugh at yourself, you're really fucked."

But that doesn't mean it's easy to be a punching bag for TV's cool kids.

"It was hard for him," said Tony DiSanto, a co-creator of "TRL" and friend of Daly. "There was a point on 'TRL' that he was bigger than the guests. Eminem was writing him into songs." His black-painted fingernails captured the public's attention, a rare glimpse of rebellion cracking the sunniest of veneers. ("That was just dumb stuff. I never really thought about it," Daly said enigmatically of his 2000s-era manicure.)

The quietude of late night at NBC suited Daly, who says he had been offered higher-profile variety shows on major networks. And he's been able to retool himself into someone whose career most closely resembles that of another world-beating music show host whose rough edges are sanded down: Ryan Seacrest. Indeed, per DiSanto, Daly and Seacrest's names were the two most frequently bandied about casting directors' offices pre-"TRL," and Seacrest almost got the MTV gig: "They were both up for the same job. At the time, Carson felt like he was more right for MTV. Now Carson's more polished as a host but back then, Ryan seemed to have a polish that was more suited for a different job" -- "American Idol," with all its late-capitalist bloat, in particular.

The pair naturally come in for comparison. "Seacrest has a bit of Tracy Flick [the 'Election' protagonist] in him," said Rob Tannenbaum, co-author of "I Want My MTV," a history of the network. "Tracy Flick wins elections and then people get sick of her. When you're on TV that much, if you are being too anything, too effusive, too clever, too snarky, too obsequious, eventually the charm rubs off because of your excesses. I guess I'm sounding like a Carson Daly fan, which I'd never really thought about before, but he seems down-to-earth enough that guys can imagine having a beer with him at a bro bar and he's not so handsome that girls think he's stuck up."

The pair seem inextricably linked -- the two most prominent people in an archaic-seeming "emcee" job that reality TV has brought to the fore. "I hear it a lot," said Daly. "We both have radio shows. 'The Voice,' 'Idol.' He does New Year's Eve [for ABC], I do New Year's Eve. There's a tale of the tape I understand. But Ryan is in his own stratosphere of business and operates on such a higher level."

And then Daly, while sounding perfectly polite, takes what could be read as a shot at Seacrest:

"I choose to have a family," he continues. "I don't know how he has a minute in his day. I think Ryan's great at what he does, but we are innately different people. We are motivated by different things. Our career paths and our wants in life are different, as proven by choices each of us personally make. I won't work past 6 p.m. because it's important for me to be with my kids and my girl. My priorities are different. I don't have that omnipotent business-work thing Ryan does."

That doesn't mean, though, that he's not ambitious; DiSanto suggested that "he might want to be a cross between a Dick Clark and a David Geffen." Daly was quick to note to us that he'll be returning to "Today" as a guest host in June. "It's been 15 years and I still feel like I'm hustling.

"But maybe I'm at a point where I can feel self-sustained financially and creatively."