Cicadas prepare to invade by the billions

But climate change may mean it's the last time 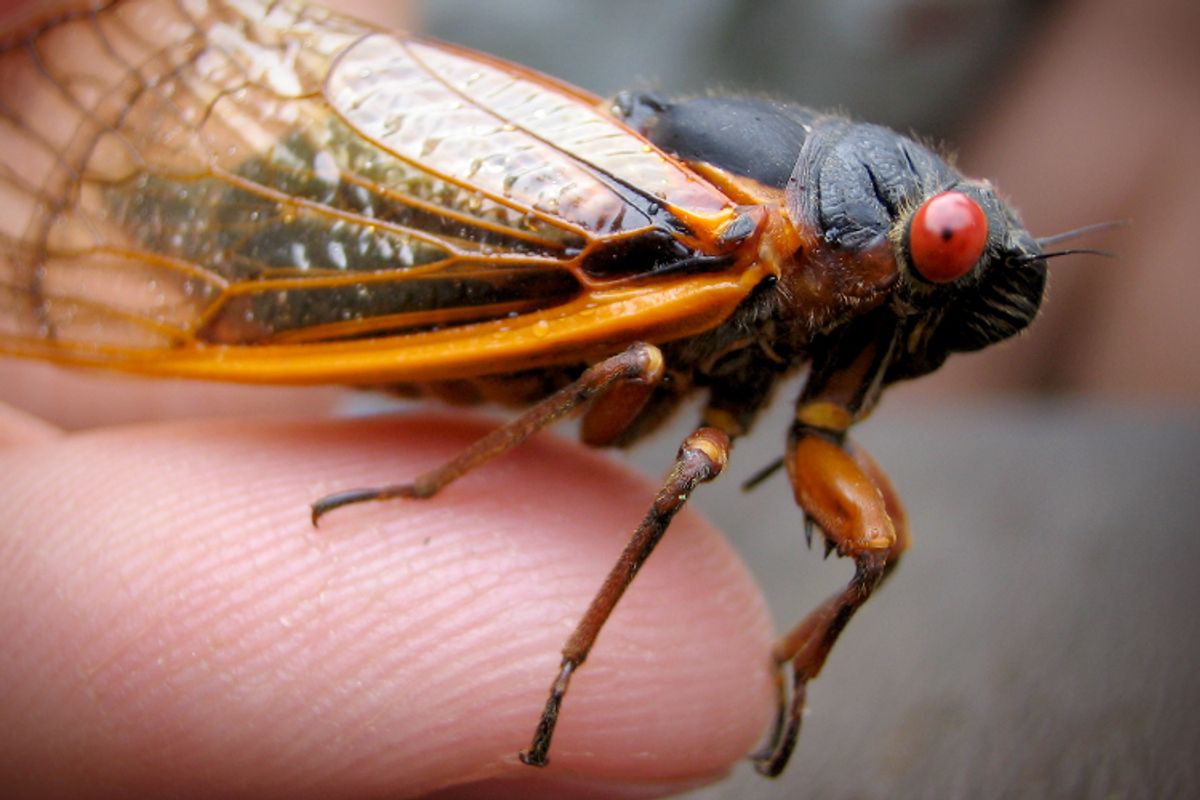 Cicadas have black bodies, blood-red eyes and legs, delicately veined gossamer wings and oddly ridged faces that resemble the Klingons from “Star Trek.” Entomologist Cole Gilbert finds them “amazing.” And after listening to him discourse about the species over lunch late last month, I think I understand why. Cicadas (Magicicada septendecim) -- like many of the species Gilbert studies -- are just plain weird.

The Pilgrims called cicadas “17 year locusts,” because some of them survive for that long underground, sucking the sap from roots, between periodic emergences in epic swarms. Locusts are in the grasshopper family, however, and cicadas are garish relatives of spittle bugs and crickets. Beyond that we know precious little about cicadas' mysterious lives under the earth. And we don’t understand why they wait 17 years between appearances (for some subgroups it’s 13 years, and there are also annuals.) Why 17? Why 13? We also don’t have a clue how these brainless arthropods manage to keep track of the passing years. And how exactly do cicada nymphs know when to all come wiggling out of the soil on cue, emerging within hours of one another after spending over a decade interred?

Most of all, we don’t know why cicadas are diminishing in numbers, their ranges shrinking in many parts of the eastern U.S., or why some historical groups have already become extinct. One thing that scientists are going to do in the weeks ahead, as the huge group, known as Brood 2, emerges from its subterranean haunts from North Carolina to western Massachusetts, is chart the precise location of populations, especially along the fringes of their range. “We need such fine scale mapping,” Cole Gilbert said, “to more directly understand the causes of shrinking distribution.”

How many cicadas are going to come out? Nobody knows for sure. “Billions, maybe more,” Gilbert says. Entomologists have counted as many as a million cicadas per acre during the peak of previous swarms. Emerging in such astronomical numbers may protect individual cicadas from predators -- there is just so much that a bird can eat.

Unlike the plague insects of the Bible, however, these chattering hordes won’t be blackening any skies. “They are lousy fliers,” Gilbert says, and if you are anywhere near them they will likely crash into you on their short and awkward flights. They won’t be chomping on Pharaoh’s wheat crop either. They are not emerging to eat, but to mate, then lay their eggs -- and finally to die at the ripe old age of 17. This makes cicadas one of the longest lived of all bugs, insect Methuselahs, if you will.

The affable and ponytailed Gilbert, a great bear of a scientist who teaches at Cornell University in upstate New York, looks more like a benign pirate without the eye patch than a university professor. And he clearly loves bugs. “Most people don't notice most insects,” he said, “because humans tend not to notice or be attracted by the small things ... All animals have the same basic needs: eat, grow, reproduce. Yet insects do it in so many different wonderful ways. Many of them are more bizarre than any science fiction film.”

Gilbert is one of the world’s leading experts on certain species of arthropods that you and I have never even heard of, and would likely find creepy and intimidating even if we had. He will be out with his colleagues scouring the edges of woodlots later this spring, which is where most of the cicadas will swarm -- although they are also expected to plaster power lines, trees and brick walls in towns and suburbs, hanging to anything they can latch onto. They will stay in place to shed their shell-like nymphal cuticles, and insert up to 200 opalescent eggs in cracks in the surface.

The word cicada means “tree cricket” in classical Greek. The Greek word -- tetitix -- is onomatopoetic, those percussive t’s and final buzzing x create a simulacrum of the high-pitched pulsing noise that the insects produce in swarm. But however loud you say tetitix, you won’t be able to compete with the not quite ear-splitting (but certainly crazy-making) 80 to 90 decibels that these insect choruses will pump out from sunup to sundown for weeks at a stretch.

Why are they making such a racket? It is the male love song. “The guys talk and the girl’s walk” is how Gilbert puts it somewhat less than scientifically. The din may also discourage predators; researchers aren’t sure. They do know how the sound is created, by the buckling of a series of ridged, spring-like structures on the male torso (an organ called the tymbal). By contracting and expanding the tymbal an astounding thousand times a second, cicadas produce, with the help of their hollow abdomens, which act as resonators, a virtually continuous pulse of sound.

Other than being extremely loud during the daytime, the insects won’t pose much of a threat. They don’t bite humans. It is rather the other way around. “Many people eat them and they taste OK ... for a bug,” Gilbert allows. He speaks from experience, having sampled the crunchy insects once, no doubt in the name of science. Cicadas, unlike entomologists, are strict vegetarians. But they can do a certain amount of harm. Their behavior of laying eggs in the slits of branches (called “flagging”) can weaken the twigs of small trees if their numbers are great enough. This damage can be prevented by netting the young trees or pruning the vulnerable twigs.

Mostly, cicadas are a boon to other hungry species. Red-winged blackbirds and Eastern bluebirds, foxes, shrews and raccoons gorge on the helpless creatures, and their brood numbers often spike during the years of the cicada swarm. Once it subsides, the dead bodies of untold millions of moldering insects blanket the ground like leaves in the fall and provide a nitrogen boost for vegetation, which swells noticeably during the summer after the swarm.

But cicada numbers are thinning out, and nobody knows why. There are even years when no periodical cicadas emerge anywhere in the U.S. This is puzzling, because the insects are vanishing from some areas where tree cover is actually increasing and urbanization and human development is not a clear factor in their decline. Pesticides and agro-chemicals also probably don’t account for the species' troubles, since they generally live in forest areas far from fields that get sprayed.

Gilbert wonders if the changing climate is to blame. He cited a study conducted in Connecticut that suggests that cicada numbers have been impacted by local variations in the weather. “Their models indicated that temperature, rainfall and seasonality were stronger predictors of where cicadas could be found than was fragmentation [of their forest habitats.]” In other words, like so many other of earth's creatures, cicadas may be ill-equipped to endure the seismic shifts in the climate system that have already begun to happen. But until more information is gathered, this is only a guess.

In the meantime, Cole Gilbert will be out there in the coming weeks with a tape recorder, a tape measure and an assortment of polyethylene collection tubs. He’ll be throwing cicadas in the air to see what direction they fly off in. If you enjoyed playing with bugs when you were a kid, I suspect you'll know where he's coming from.