It's time for Democrats to ditch Andrew Jackson

As Biden speaks at event named for Old Hickory tonight, more appalling stories show party should dump him as icon 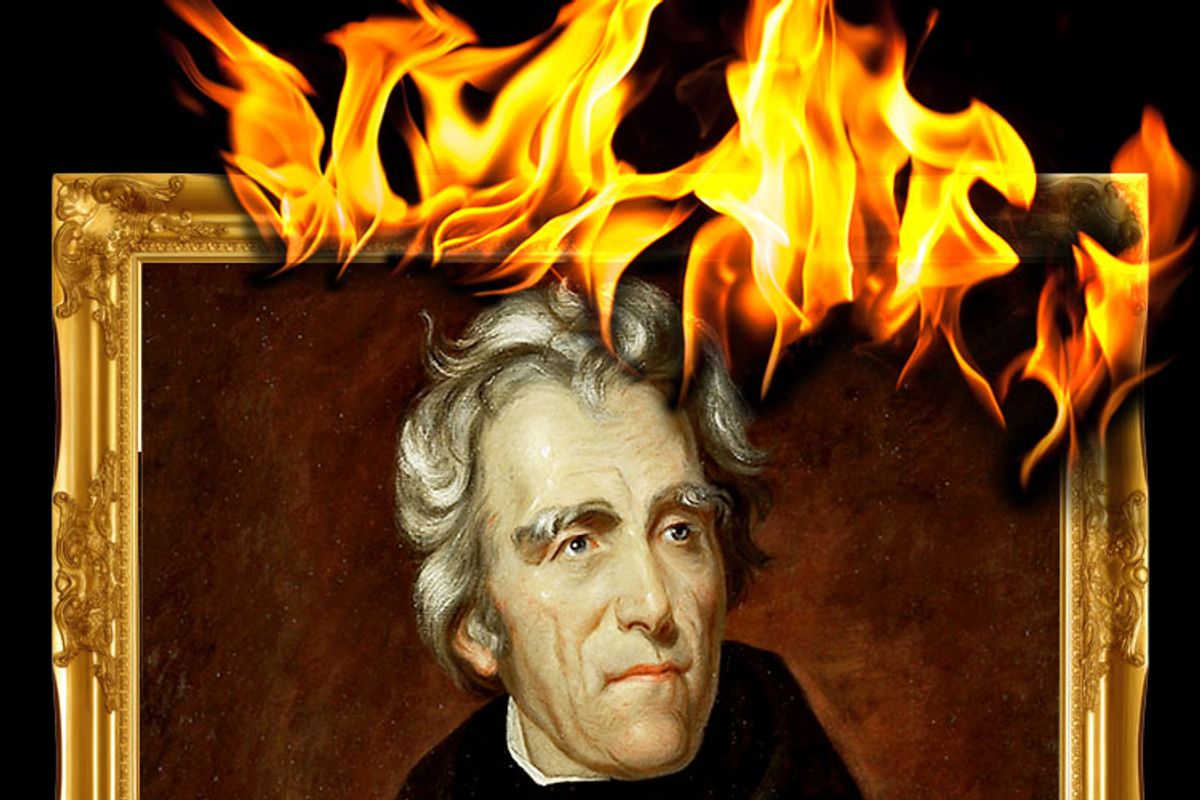 Spring means that appeals for money are bursting forth from both major political parties. It also means Democratic officials in states and counties around the country are busy getting people out to their major fundraiser, the Jefferson-Jackson Day Dinner. And they’re bringing in the big guns: Vice President Joe Biden will keynote the South Carolina Democrats’ dinner tonight.

But after an election in which Democrats rode a wave of minority support to keep the White House and Senate, party activists should wonder about one of the founders for whom that event is named. If branding matters, then the tradition of honoring perhaps the most systematic violator of human rights for America’s nonwhites should finally run its course.

Renowned journalist T.D. Allman’s gripping "Finding Florida: The True History of the Sunshine State" argues that brutality was a habit of mind for party icon Andrew Jackson long before he laid the groundwork, as president, for the Trail of Tears, the thousand-mile death march that killed 4,000 Cherokees in 1838−39.

Allman takes us back to July 1816 at a place called the Negro Fort in Florida’s Panhandle, the site of modern-day Fort Gadsden. Florida then belonged to Spain, and the area around the fort was home to Spanish-speaking black and Choctaw Indian farmers who had settled along the Apalachicola River with permission from the Spanish. Unfortunately for them, then-U.S. Army Maj. Gen. Andrew Jackson hated the idea of a free colored community across the border that might serve as a magnet for runaway slaves.

So he invented a pretext for doing away with them, telling his subordinates they were villains bent on “rapine and plunder.” In reality, they were guilty of nothing more than raising crops, and Allman says no historian has ever produced a shred of evidence to the contrary.

No matter; Jackson illegally ordered troops into Spanish territory to destroy the fort, a wooden affair a little larger than a modern-day high school basketball court. Alerted to the attack and crowded into its walls for self-protection were about 330 civilians, more than 200 of them women and children. On July 27, 1816, Jackson’s troops attacked the fort, slaughtering 270 of them. Mainstream histories claim that a single cannon shot blew up the structure, though Allman finds that account hard to square with the evidence, calling it one of the worst massacres in U.S. history. Jackson’s forces then set off on a terror campaign along the river, kidnapping free blacks and marching them back into U.S. territory, where they turned them over to friends and associates to keep as slaves.

Jackson wasn’t finished with Florida. In 1819, with its power waning, Spain traded the territory to the United States as part of the Adams-Onís Treaty. Florida historian Canter Brown documents how Jackson, appointed Florida’s provisional governor in 1821, proceeded in short order to violate the treaty’s terms guaranteeing the rights and privileges of Florida’s free blacks. He had Native American allies launch a raid into western Florida to destroy the village of Angola, where black and mixed-race people lived, some of them descendants of escaped slaves. After razing the town, the allies seized 300 prisoners. No one knows exactly what happened to those captured, but Brown’s evidence indicates Jackson and the raid’s commander well may have profited personally by selling them back into slavery.

Seven years later, as president, Jackson would make way for the slave-based cotton empire in the South by forcing native tribes off their land. That he did so by violating the terms of his own Indian Removal Act, the precursor to the Trail of Tears, should matter at least a little. Indian tribes actually had the right under that law to voluntarily choose to give up their land in Alabama, Mississippi and Georgia, as University of Toledo history professor Alfred Cave demonstrated in a 2003 article in the journal the Historian. What the law didn’t authorize Jackson to do was precisely what he did — allow the Indians to be removed from their land at bayonet point.

But is it unfair to hold Jackson to today’s standards? It would be -- had Jackson’s contemporaries not tried their best to stop him. Cave documents a campaign against Jackson’s Indian removal policy that continued throughout the 1830s; one signature petition from New York City was 47 yards long. From 1830 to 1842, 85 percent of opposition Whig Party congressional votes on removal were cast in opposition to Jackson’s policy, according to a 1993 journal article by historian Fred Rolater. And Allman describes an 1837 investigation by congressman William Jay concluding that Jackson’s destruction of the Negro Fort constituted an illegal use of taxpayer funds to support slavery.

Today, Democrats sound open to reconsidering whether honoring Jackson still makes sense. In Jackson’s home state of Tennessee, party spokesman Brandon Puttbrese says, “I think we welcome these kinds of conversations about our history. What he did in office … these are not things we should be proud of, but they’re definitely things we must learn from.” But if so, why keep Jackson as the party’s brand? “One explanation might just be inertia — it’s been that way forever, so it’s still that way,” says Puttbrese.

In Arkansas, party representative Candace Martin acknowledges that “If you look at the overall values of the Democratic Party, then Andrew Jackson probably would not be representative ... It’s maybe something that we should be debating.”

And a Democratic official in one state who didn’t want to be named thinks Jackson’s days are numbered as a fundraising brand: “When I think of Andrew Jackson, I automatically think ‘Trail of Tears’ …” the official says. “If a bunch of people in my generation were creating this dinner, I don’t think we would name it the Jefferson-Jackson Day dinner. I think a lot of things that happen in politics are just like, ‘Well that’s the way it’s always been.’”

Mississippi party chairman Rickey Cole does offer a robust defense of Jackson, the namesake of that state’s capital. Cole argues that Jackson was committed to public investment, a value that carried through Democrats from Woodrow Wilson to Franklin Roosevelt and today’s party leaders. And it was Jacksonians who got rid of the requirement that white men had to own property to vote, he says. “For that day, for that time, it was progressive,” Cole says.

But the historical record casts doubt on even those parts of Jackson’s legacy. His states' rights, small-federal-government philosophy led him to veto much-needed federal money for transportation improvements like one extending the National Road in 1830. And Allman doesn’t buy the idea that Jackson’s expansion of suffrage to all white men eventually led to freedom for everyone else. That cover story papers over Jackson’s violent expansion of slavery into the Southeast, which dramatically strengthened the Southern slave powers and fueled the Civil War. “I don’t accept the argument that Jackson’s main contribution to history was expanding freedom,” Allman says. “His main contribution was expanding slavery.”

Should Jackson’s history matter to Democrats? If not, it’s hard to explain why Republicans went to such lengths before the presidential campaigns in both 2008 and 2012 to paint themselves as the historic defenders of minority rights by recounting the crimes of Southern Democrats before the civil rights era. Today’s Democrats play into their hands by continuing to embrace Jackson; in the battle for minority votes, branding could prove to be the difference.

State parties have dumped Jackson before. In 1978, Minnesota Democrats renamed their Jefferson-Jackson dinner for Hubert Humphrey. Oklahoma Democrats replaced him with former Majority Leader Carl Albert in the 1990s. And in 2010, the North Dakota party picked legendary Sen. Quentin Burdick as the fundraiser’s namesake instead.

With Republicans also raising money with Lincoln-Reagan dinners this spring, Democrats have to take a harder look at what the past means for their future. If so, they’ll find it’s not hard to do better. Roosevelt-Kennedy has a nice ring to it.

Steve Yoder is a frequent contributor to The Crime Report. He writes about criminal justice, immigration, small business and real estate. His work has appeared in The American Prospect, Good, The Fiscal Times and elsewhere.