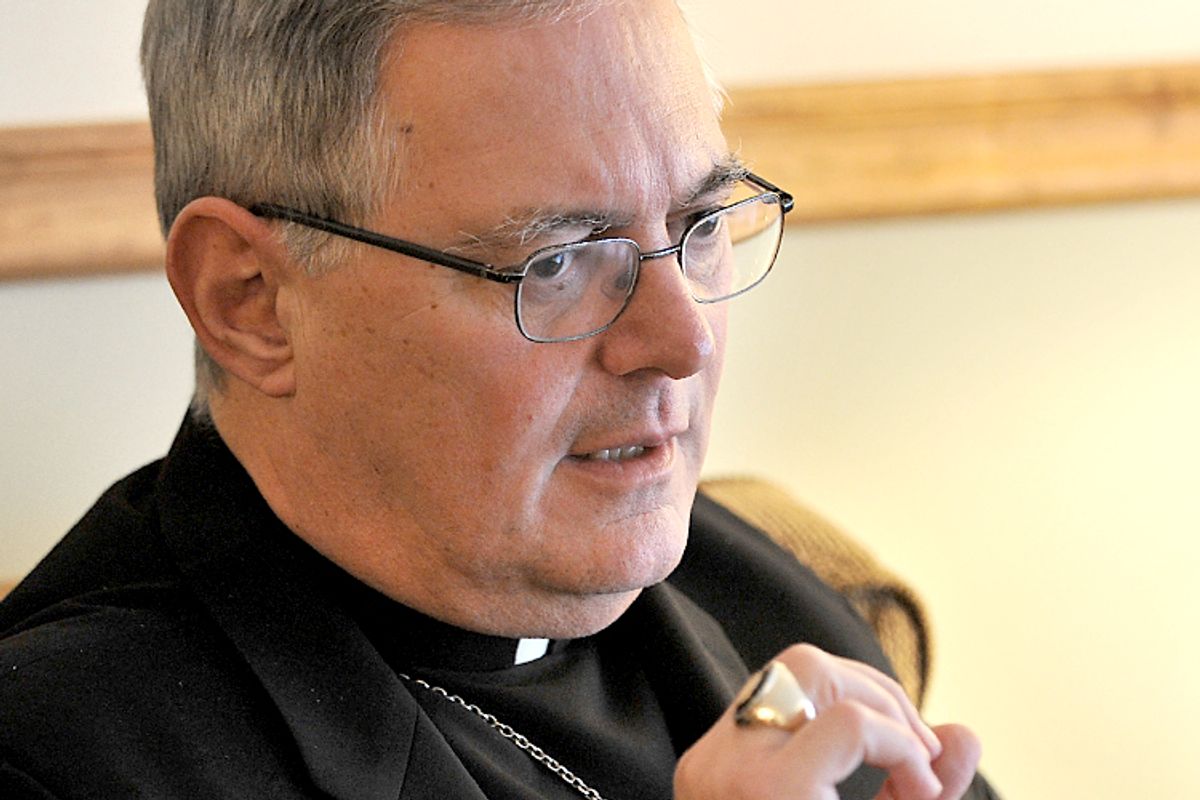 That was a brief honeymoon, Rhode Island. Just hours before becoming the 10th state to approve marriage equality, the slim, pocket-sized state -- which also happens to be the nation's most Catholic -- received a stern warning from the Bishop of Providence.

In a seriously buzzkill message, Bishop Thomas Tobin issued a pastoral letter to his brothers and sisters in the Ocean State suggesting they might want to decline invitations once same-sex marriage becomes official in August. "It is important to affirm the teaching of the Church, based on God’s word, that 'homosexual acts are intrinsically disordered,' (Catechism of the Catholic Church, #2357)," he writes, "and always sinful. And because 'same-sex marriages' are clearly contrary to God’s plan for the human family, and therefore objectively sinful, Catholics should examine their consciences very carefully before deciding whether or not to endorse same-sex relationships or attend same-sex ceremonies, realizing that to do so might harm their relationship with God and cause significant scandal to others."

Well, if anybody would be an authority on significant scandal, I'd bet it'd be a Roman Catholic priest.

Nobody expects a Catholic leader to issue a "Mazel tov on your big gay weddings, you guys!" Tobin is a product of a specific system and represents its ideology, to which he has to conform. It's worth pointing out, however, that the Church can and does reverse itself, which will someday soon make Tobin's comments look especially absurd. After all, in 1965 it stopped blaming all the Jews for killing Jesus. Just six years ago it decided that unbaptized babies might actually go to heaven. And a mere 359 years after branding him a heretic, the Church decided maybe it had been a little hasty regarding Galileo.

There's still hope for these guys to figure out civil rights!

That's why its lackeys really could do better right now than blurting the standard line, "God cares for you but finds everything you stand for, do and desire in life despicable." Tobin's insistence that the Church has "respect, love and pastoral concern for our brothers and sisters who have same-sex attraction" doesn't really sing with love and tolerance, does it? And his butt-hurt response to "this new challenge of the post-Christian era into which, clearly, we have now entered" is flat-out arrogant. It reeks of disgust, implying that merely coexisting with individuals of other beliefs -- individuals who might, for instance, not have any religious conflict with marriage equality -- are a tiresome burden to him.

Tobin is no doubt trying to adhere to the Christian message as he sees it. And he's supportive of other rights issues, like immigration reform. But like so much of the Catholic Church, he's got a bugaboo about what he considers "serious regression in the public morality" and a total lack of comprehension that loving, committed relationships are not a threat to it -- they're a validation of it. You can't say that you wish those "disordered" people with "same-sex attraction" "much health, happiness and peace" without grasping that a) it's part of the human condition to find happiness with others and b) you sound like a condescending prat. But worst of all, Tobin halfheartedly preaches love of gay people while seeking to intimidate his flock out of behaving in a way that's truly loving toward them. He asks Catholics to back off supporting their friends and family members as they enter into their lawful unions, to boycott their weddings, under penalty of harming their "relations with God." And that is stone-cold ugly.

I don't know for certain what Jesus -- who definitely knew how to bring the party at a wedding -- would do if he got a "save the date" card to a same-sex event. I do know that his support for unity must have been powerful for it to be used as the backdrop of a big story in the Bible. Jesus clearly believed in celebrating love, which is good enough for me, and which should be the standard reaction to anyone, of any orientation, who tells you, "We're getting married." And as for Tobin, I wouldn't worry about the dilemma of what to do about all those new weddings that are going to be taking place in Rhode Island. I doubt he'll be invited to too many.