Rand Paul will never be president

To be a viable White House contender, you have to be within your party’s mainstream on public policy. He's not 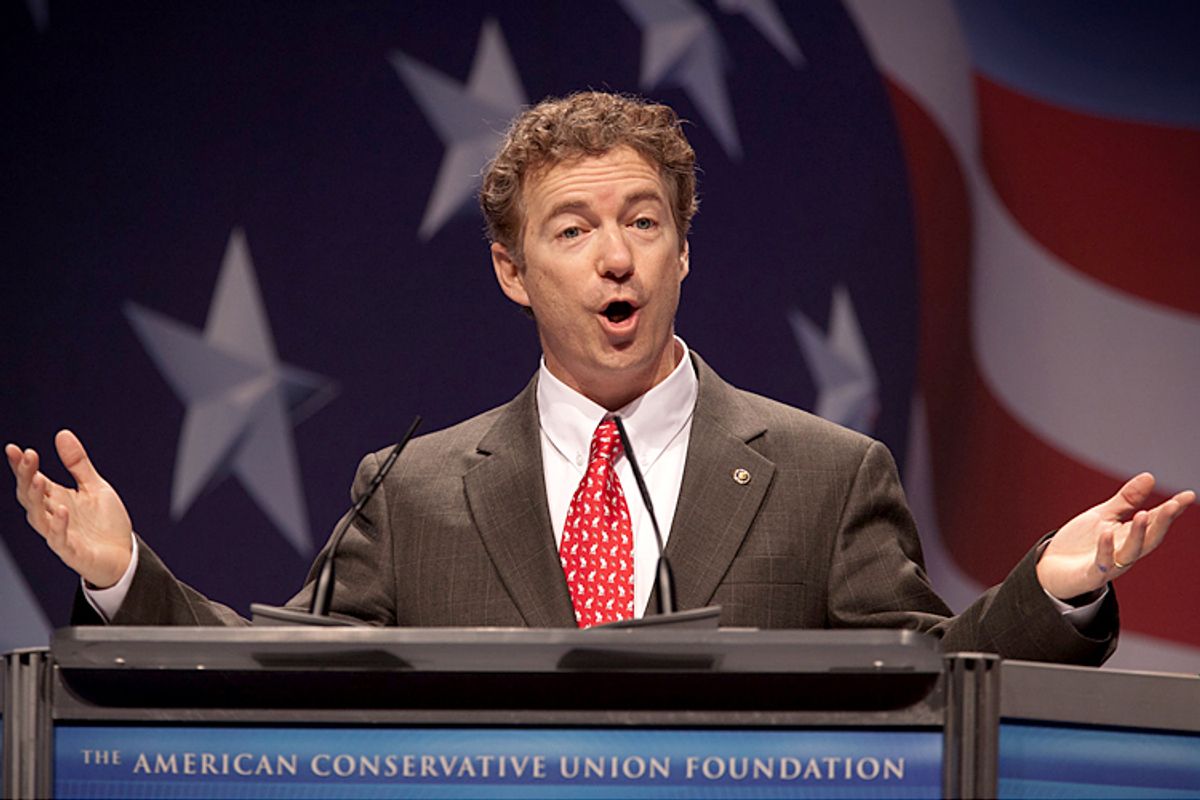 Rand Paul, president of the United States of America? Unlikely at best.

Paul the Younger hasn’t disguised the plain fact that he’s running for the 2016 Republican nomination for president; he’s already begun making appearances in early primary and caucus states, and this week he started putting in motion the machinery for a presidential campaign.  It’s always possible he won’t be running in 2016 – but for now, he’s certainly running for 2016.

And yet … Rand Paul faces very long odds. Perhaps not quite as long as his father did in his numerous presidential runs, but long enough.

There are basically two questions to ask about whether someone would be a viable candidate for a major party nomination. First, a candidate must have conventional qualifications. Paul certainly clears that hurdle, although not all that impressively. By 2016, he’ll be finishing up a full Senate term. That’s a little more than Barack Obama had (presumably Obama’s state legislative service meant little on this score). It’s more than Mitt Romney, a one-term governor, had. It’s the same number of years as George W. Bush, although Bush had the added qualification of having been reelected. So there’s no real barrier there.

But the second question is the one that probably knocks him out: Viable candidates must be within their party’s mainstream on questions of public policy. That’s particularly true for issues over which large, influential party groups can exercise a virtual veto. And that’s what’s extremely likely to happen to Rand Paul in 2016.

There are just too many public policy areas, and too many important groups within the party in those areas, for Paul to really be viable. It’s possible that Paul and Republican Party actors could work out some sort of deal on “war on drugs” issues; after all, there are limited things that a president can do without Congress, so Republicans who favor current drug laws and enforcement strategies might be willing to live with him as long as he signaled that he wouldn’t make it a priority in a Paul presidency. It’s also possible, indeed likely, that on some of the fringe issues where he and most Republicans disagree that there would be no real objection to a nominee who disagrees with them. I think that might be true, for example, on many civil liberties issues. There are, for better or worse, very few people on either side (and in either party) for whom civil liberties is a central issue.

There’s just no way, however, that the people within the Republican Party who care about foreign policy and national security would easily accept Rand Paul.  It’s bad enough for Paul that the neoconservative faction would want nothing to do with him, but the realist Republicans, those associated, for example, with President George H.W. Bush, would be almost equally opposed to Paul’s anti-interventionist policies.

Not only is there no precedent for anyone with so many, and such important, conflicts with party orthodoxy, but there’s really no precedent for anyone coming very close during the modern (post-1968) era. Not only that, but all the cases that might be said to be similar on some level happened in the early years of the reformed system, when the novelty of the process yielded some results we haven’t seen from 1980 on:

Harry Enten argues that Rand Paul is a better politician than his father, and that if he could only build on Ron Paul’s totals by a fairly small amount in Iowa and New Hampshire then he would have a real chance to defeat a large, competitive field in both states. I’m not sure if the premise is true; Rand Paul has, after all, run in only one election, and in a year in which several oddball candidates won Republican statewide primaries and were then helped by national tides in general elections.

But even so, I think that kind of analysis shortchanges the role of party actors in the process. Basically, there’s nothing to prevent a factional candidate from winning in Iowa and New Hampshire. The system isn’t built that way; in fact, with the large fields that early primaries and caucuses typically attract, several candidates have won in those or other early states without coming anywhere close to the convention, much less the White House.

But if those candidates are opposed by important party actors, they get steamrolled soon after – as Newt Gingrich found after winning the South Carolina primary in 2012, or Paul Tsongas after winning in New Hampshire in 1992. And as fields narrow, the concentration of party resources – not just money, but interest groups, politicians, the party-aligned press – is almost certainly too much for someone opposed by those party actors to overcome.

Is it impossible for Rand Paul to win? It’s politics; it’s usually a mistake to say things are impossible. Paul could modify his positions enough that those who oppose him do not feel obliged to work to defeat him. It’s even possible, but highly unlikely, that Paul and his allies could flip the Republican Party on key issues.

And it’s not just policy disagreement: those Republicans who care little about issues and ideology but care a lot about winning elections would be very reluctant to put a candidate on the ticket who, beyond his disagreements with Republicans, has embraced a host of issues that would rapidly give him a reputation as far from the mainstream in the general election.

Rand Paul could certainly be relevant in 2016, both in how he attempts to push the GOP toward his issue positions, and in the effects he has on contested primaries. He may well wind up with more delegates at the convention than his father had (but again, there’s no guarantee of that; we’ve yet to see how he’ll hold up to a national campaign).

But a serious chance of winning the Republican nomination? At the very best, he’s right on the fringe of being a viable presidential candidate. More likely, he’ll simply duplicate what his father has done. There’s a long way to go, but I see no reason to believe that Rand Paul will win the 2016 Republican nomination for president.