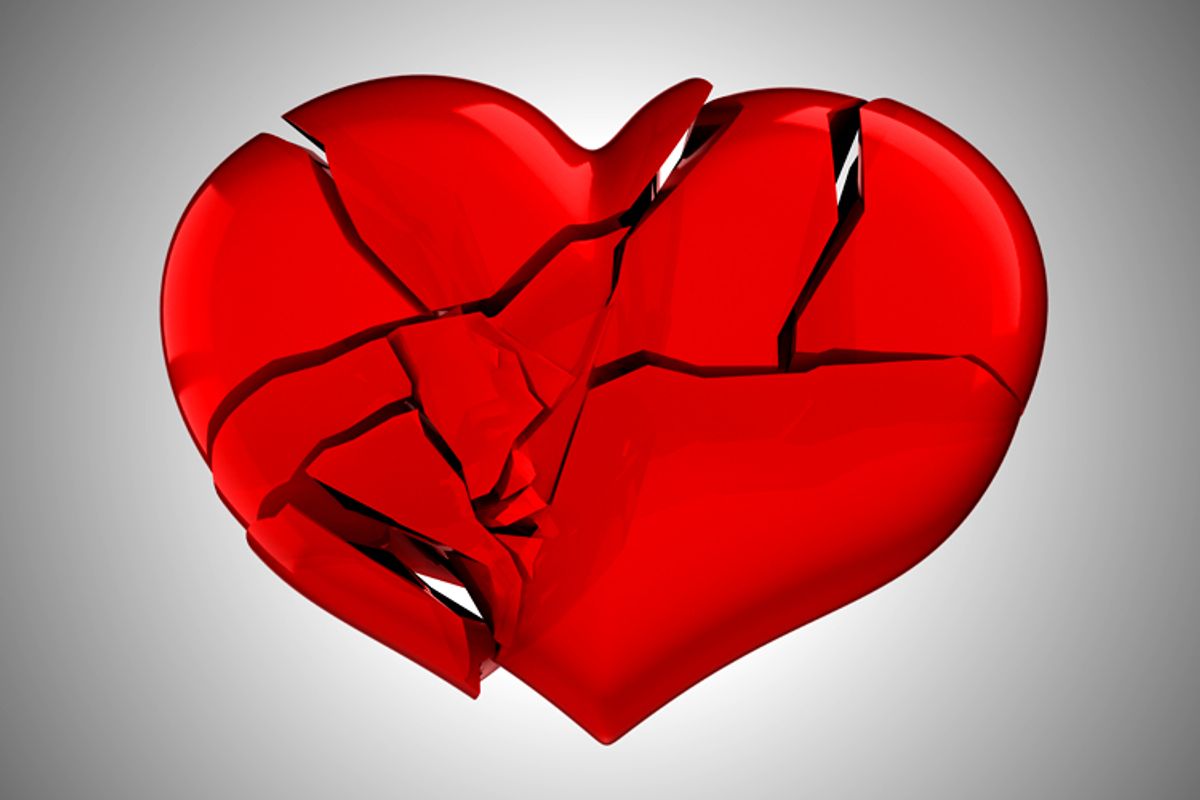 I just want to call him. That's a phrase Susan J. Elliott heard from a client just this week -- and one she hears most weeks. Newly single women will time and again try to get permission from her to call their ex. That's because the former therapist is a new breed of personal motivator: The breakup coach.

There is no shortage of professed wisdom on getting through heartbreak: There are women's magazines, advice columnists, self-help books and, of course, the cliche Sunday brunch proclamations of "you deserve better." That's not to mention the prescriptions of a Katherine Heigl movie, a tub of ice cream and some "Jagged Little Pill" karaoke. And yet, enough people still find themselves in search of post-breakup help that Elliott now does breakup coaching full-time and has clients the world over. It was recently rumored, and totally unsubstantiated, that Katy Perry paid a high-priced breakup coach to get over her ex-husband Russell Brand.

Elliott, author of "Getting Past Your Breakup," typically focuses on helping clients to get over the immediate hurt of the breakup. That's why she often first sets out to end contact between her client and their ex. (This reminds me of Charlie's fictional app on HBO's "Girls," which fines people for contacting exes.) "The more time they spend talking to their ex rehashing things, the harder it is for me to bring them back to the focus on themselves," she says. It can be difficult to effectively put a kibosh on contact: Clients often want to contact their ex in the hopes of getting back together or understanding why the relationship ended. In the case of the client mentioned above, Elliott asked her to write down all the questions she could possibly ask her ex and then to write down all the answers she could possibly get in return, in hopes that it would make her realize how pointless the conversation would be. For example, Elliott says, "She can say, 'You told me you loved me' and he could say, 'Well I did, but I don't anymore.' That's not going to make her feel any better."

Plenty of her sessions, which cost $89 each, are spent talking clients out of trying to get back together with their ex. "If you're trying to get the person to come back by pointing out, 'I was so good to you, I did this for you, I did that for you' and you make them feel guilty and they come back, OK, how long do you have to keep doing that? For the rest of your life you have to keep reminding them how great you are?" And then there's the tough work of rebuilding clients' self-confidence. She often hears things like, "I'm gonna be alone forever," along with complaints of being "old," "fat" or "frumpy." Instead of worrying about the future, she tries to get clients to develop "hobbies and interests." She says, "I tell people a good relationship is one that expands your life and a bad relationship will narrow your life -- but first you have to have a life."

Other breakup coaches, like Lyndra Hearn Antonson, focus more on identifying troubling relationship patterns and preventing clients from replicating them in future relationships. "If we're blaming the external word or ex-partners, we're stuck in being victims and aren't able to really evolve," she says. "Part of what's important in breakup coaching is for people to be in a place where they may be able to see that they keep attracting people who aren't available or who care more about themselves." While Antonson says "people," most of her clients are women, who are generally "given more permission to focus on relationships, talk about them and even get help."

There is no standard training for breakup coaches; their experience ranges from some time in the self-help aisle to life coaching workshops to decades as a traditional psychotherapist. Similarly, services include everything from in-person talk sessions to motivational email blasts generated from a Mad Libs–like form that you fill out. Some messaging is based on actual psychological principals, some on a you-go-girl mentality that is, shall we say, not so academic. (Consider this e-card featuring a princess in a pink gown that reads,"A certain 'PRINCE' turned out to have frog-like tendencies. Please bear with me while I wipe away the taste of amphibian.") It's no surprise then that some coaches seem like respectable professionals, while others come off as total hucksters.

You might wonder, as I did, why someone would see a breakup coach as opposed to your standard insurance-covered therapist. Elliott argues that traditional talk therapy is "much less interactive" and "much more passive." "I think that when people are going through a breakup, they want someone to guide them as to what to do," she tells me. "None of us are really taught what to do in breakups, other than people saying stupid things like, 'There are plenty of fish in the sea' or 'Go out and get a pedicure and manicure.'" Antonson, a former psychotherapist, says her new-found profession addresses the less serious cases. "Coaching is more for people who are functioning relatively well," she says. "But breakups tend to cause most of us to kind of regress ... so sometimes it can be a bit confusing whether a person needs breakup coaching or therapy."

Or, you know, a good friend.