Howard Kurtz faces the rarest threat of all: Pundit accountability

In a strange glimpse into alternate reality, CNN's media critic faces tough questioning on his own show 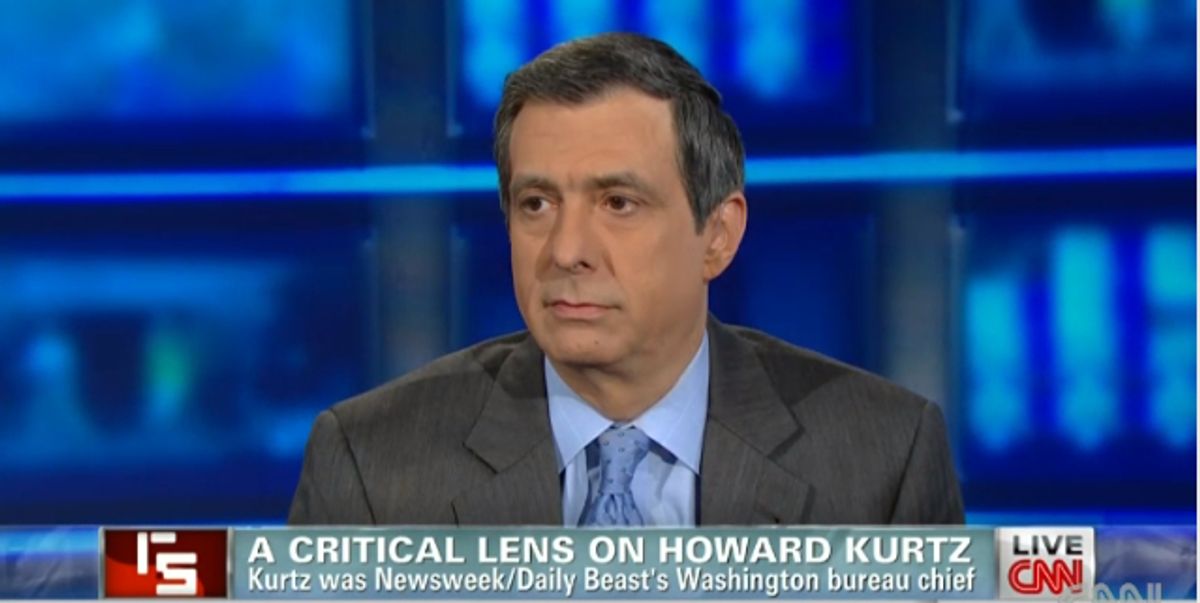 The video of CNN "Reliable Sources" host Howard Kurtz receiving an adversarial questioning by two media reporters on his own show, which happened Sunday, is remarkable, mostly because that doesn't ever really happen to TV pundits. (Piers Morgan is questioned by U.K. parliamentary committees, not by Jake Tapper.) The host was being treated like a scandal-plagued politician, not like the most prominent media critic in the country.

Kurtz just got the ax from the Daily Beast, following a column in which he attacked Jason Collins, an NBA  player who recently came out as gay, for not disclosing that he'd once been engaged to a woman. Collins had in fact disclosed that. But the Beast also seemed to want an excuse to rid itself of Kurtz, its "Washington Bureau Chief," who had recently (for like the last year or so) seemed hugely distracted by other ventures that he also seemed more interested in promoting.

So, following his very own media scandal, Kurtz allowed himself to be questioned on his errors and associations by Politico's Dylan Byers and NPR's David Folkenflik (possible "Reliable Sources" hosting audition!). The two wanted to know how, precisely, Kurtz screwed up the Collins story. Kurtz didn't have a great answer. Byers focused on some of Kurtz's high-profile mistakes over the last few years. Folkenflik attempted (and largely failed) to nail down what the hell the deal is with the Daily Download, the strange media news site that Kurtz helped launch, and that he frequently contributes to. Kurtz presented himself as a co-founder when he was pitching the site before it launched. He insists he is an unpaid adviser and a mere paid freelance contributor. The site's editor, Lauren Ashburn, is on TV with Kurtz all the time. Kurtz got the site a huge Knight Foundation grant. On these matters, Kurtz was still pretty vague.

For most of the segment, Kurtz was deeply apologetic and also frequently looked like he was going to be ill, on TV. This is embarrassing stuff, to be grilled on your professional fuck-ups. It's also true that Kurtz, over his career, hasn't make that many massive errors, despite his profligacy. Though perhaps his errors have increased as he's become, paradoxically, both busier and lazier.

It's worth remembering that this never happens. Media people in Kurtz's position face plenty of criticism, but nearly all of it is from people who don't have television shows. (Or, at best, people who have television shows on competing networks.) Hosts are sometimes canned for controversy, or declining ratings, or because of personality clashes, but hosts aren't really ever interrogated for their sins against the profession of journalism. It turns out to be great fun, for everyone but Howie.

It was quite a weekend for unreserved apologies for strange anti-gay remarks. On Saturday, historian and colonialism-promoter Niall Ferguson  unreservedly apologized for remarks he'd made recently arguing that John Maynard Keynes purposefully endorsed irresponsible economic policies because as a gay person he had no interest in ensuring prosperity for future children.

Ferguson's apology certainly seems sincere, just as Kurtz seemed appropriately chastened. But both incidents revealed something about both men: That Ferguson the historian has disappeared entirely into Ferguson the glib, check-cashing hack who'll say anything to flatter his rich conservative audiences, and that Kurtz has grown lazy and has some weird issues with gay people. (The question at the heart of the original Collins column -- and the video -- is what Kurtz was even trying to prove. That Collins was lying about ... being gay? For attention?)

It's rare to see major, hugely successful, highly paid professional opinion-sharers publicly shamed and held accountable for their screw-ups. Accountability is rare in the elite media, as it is in most fields involving people than can reasonably be referred to as "elite." But accountability in this case doesn't necessarily mean much beyond embarrassment. While Kurtz did lose (or leave) one job, it doesn't seem likely CNN will fire him following his successful damage control. Ferguson will not lose a single speaking engagement, or his Harvard gig.  They are too successful to be tripped up by the sorts of things that derail the careers of people who haven't spent a decade being awful hacks.

This might be the best we can hope for: If the ratings were good enough, maybe "invite people on to compel the host to justify himself" will catch on at the cable news networks. Let's do Scarborough next!