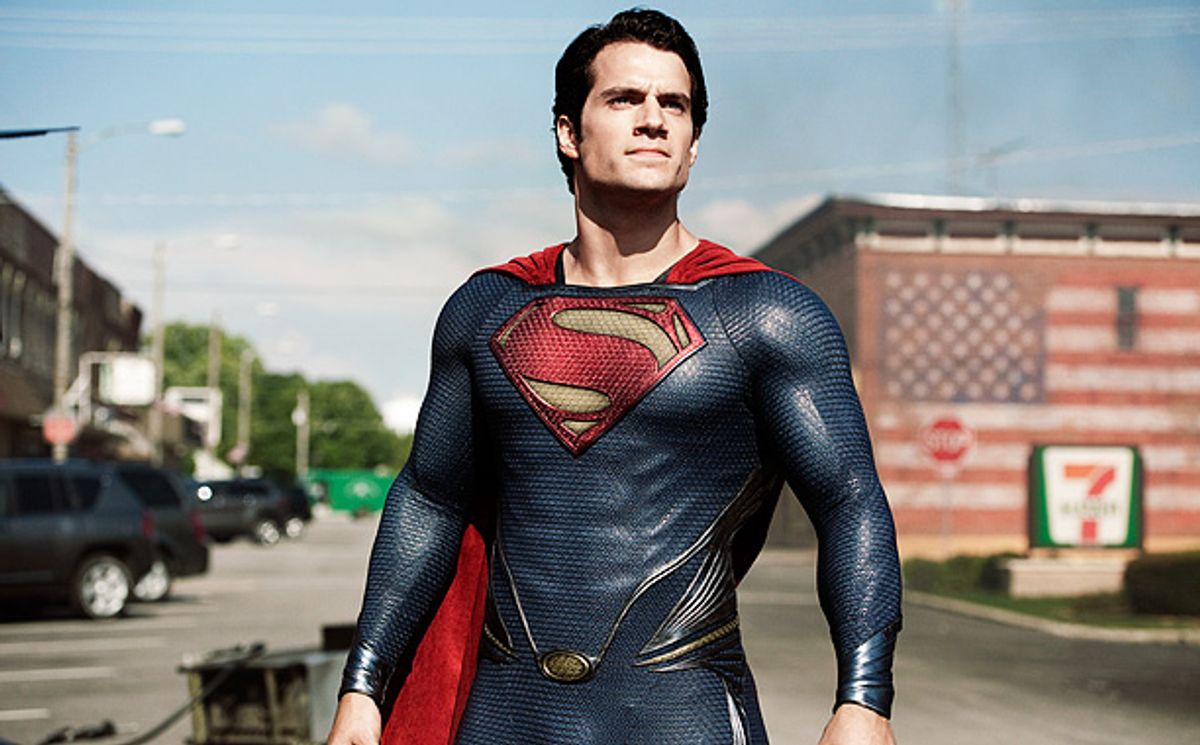 Scene still from "Man of Steel"
--

The new F-35 Joint Strike Fighter will fly its first mission on June 14, 2013, but it won’t be over Afghanistan, Syria or Yemen. It’ll be over the mythical town of Smallville, in the upcoming Man of Steel. In reality, the F-35 may never fly. The program is currently grounded, due to flight difficulties, after the government poured $400 billion into it. Reuters reports that the final cost of the program might be, sit down… $1.5 trillion dollars.

It’s an open secret in Hollywood that before the MPAA reviews many movies, the Pentagon does. David Robb documents the practice in his book Operation Hollywood. Whenever movie producers want to use Pentagon equipment: helicopters, bases, submarines, etc. they send a request to the Pentagon, along with five copies of the script. The Pentagon replies with proposed changes to the script, which the producer must either accept, or forgo the equipment (which disinclines studios to finance the film, since it entails extra costs). Then, while the movie is shot, a “minder” hangs along, to ensure the director sticks to the script. Final approval comes from Pentagon brass who pre-screen and censor the film.

Man of Steel isn’t the first time that the Pentagon has used Hollywood as an advertising firm: both Iron Man movies made use of F-22s. The F-35, Wired reports, has thirteen costly flaws, and yet they’ll soar in the movie – including technical failures in Pentagon-funded movies is a no-no.

In the 1961 Lassie episode “Timmy and the Martians,” Lassie howls to alert Timmy of a plane crash. In the original episode, once the military has re-assembled the plane they discover that a faulty wing had caused a high-pitched vibration which Lassie had detected. When the producers requested military assistance, the Pentagon declined, on the basis that children should not be exposed to the idea that the military makes faulty equipment.

Movies which garnered approval include Pearl Harbor, Top Gun and GoldenEye. Movies which had to due without include Forrest Gump, Platoon, Independence Day and Thin Red Line. Among the taboo subjects for the Pentagon: anything that will decrease recruiting, alcohol or drug use, aliens overpowering the military or any military personnel depicted in a negative light. Forrest Gump failed to procure funds for implying that the Army was staffed by “soldiers of limited intelligence” and for the scene in which Hanks moons the President. In the original GoldenEye script a Navy Admiral sells state secrets, the final version, it’s now a Frenchman.

Americans should fear the military suppression of speech. Excellent movies like The Thin Red Line that accurately portray the horror of war face a disadvantage to movies like Top Gun that glorify it. Movies like Platoon are suppressed in favor of recruiting propaganda like Pearl Harbor. David Robb argues that this is a clear violation of the First Amendment, and cites Rosenberger v. University of Virginia (1995) where the court decided, “It is axiomatic that the government may not regulate speech based on the substantive content of the message it conveys.”

The Pentagon claims it aims to “portray the military as it actually is,” but don’t planes sometimes have technical difficulties? Doesn’t torture sometimes lead to bad information? Don’t soldiers come home with post-traumatic stress because the enemies are human, not vague abstractions? Does the Pentagon truly want to “accurately portray” history? Let’s examine two cases studies. The first is the 2000 movie, Thirteen Days, in which the military brass urge President Kennedy to engage Cuba militarily. David Robb recalls that Pentagon pushed the producers to tone down the implications, but they refused and went without military assistance – a risky move since, “most studio heads tell their producers, ‘We’re not going to make this film unless we get military assistance, because it would be too expensive. So you’d better make sure the script conforms to what they want.’ ” One such case is Charlie Wilson’s War, the movie about Charlie Wilson’s attempts to aid the Mujahdeen during our proxy war with Russia in Afghanistan. In the original script, says Matthew Alford, in an interview with Al Jazeera [30:00] “there is a very clear link between the U.S. arming the Mujahdeen in Afghanistan in the 1980s and the causes of 9/11. Now, we know from a CIA advisor who was on set, he says ‘we deliberately made sure we excised that film.’ ” I asked Alford, author of Reel Time: Hollywood Cinema and American Supremacy, whether the Pentagon’s thumbs down had ever silenced a movie entirely. He cited Countermeasures, a 1994 movie that requested an aircraft carrier but was turned down because, “There's no reason for us to denigrate the White House or remind the public of the Iran-Contra affair.” As to the “accurate portrayal” question, he replied, “Since when was it ‘realistic’ for the US military to go to war against Transformers?”

The CIA has recently gotten into the racket. The Los Angeles Times reports that “The CIA has kept an entertainment liaison on staff only since 1996. At that point, the Cold War had ended, and the agency was fighting for its budget and its existence on Capitol Hill. The new mission was clear: to overcome the CIA's image in popular entertainment as incompetent, evil or rife with rogue employees.” Bill Harlow, the CIA public affairs chief is quoted saying, “I made that a big priority, and we did a lot more with Hollywood than ever before.” Tricia Jenkins reports in her book The CIA in Hollywood that the CIA was “influenced” the production of Argo which is why the movie is essentially an ad for the CIA. She reports that the underlying theme- that the public never finds about the CIA’s successes and only its failures- is one of the narratives that the CIA constantly encourages producers and directors to relate. Exactly what changes will remain unknown, Alford says, “the DOD learnt its lesson not to allow this information into the public domain.  You won't find any records of annotated screenplays from the past decade or so.”

I asked Dave Robb how many movies never got produced because of the exorbitant cost of going without Pentagon equipment. He replied:

The Marine Corps' film office in Los Angeles contains a floor-to-ceiling shelf of files on films that asked for assistance but were never made. Some of these probably couldn't get financing, but many weren't made because they would have been impossible -- or prohibitively expensive -- to make with out military assistance.

This is a prima facie case for de facto censorship. I consider The Thin Red Line to be the greatest war movie ever made; the thought that it may have been added to the shelf of unknown films with Countermeasuresis disturbing. If the government wants to allow its equipment to be used by studios, it needs to grant access to anyone who wants to use it – that is the meaning of pluralism. The Pentagon fears that some of the movies may hurt the military’s reputation and recruiting efforts. These concerns are legitimate, but it’s more important that we allow John Stuart Mill’s “market place of ideas” to be a place for free trade, rather than favoring some over others.

Movies in the last decade made with the cooperation of the Pentagon:

2011 Transformers: Dark of the Moon

2009 Transformers: Revenge of the Fallen

2008 The Day the Earth Stood Still