If the right wing is so concerned with family, why can't it make slight sacrifices to avert disaster for our kids? 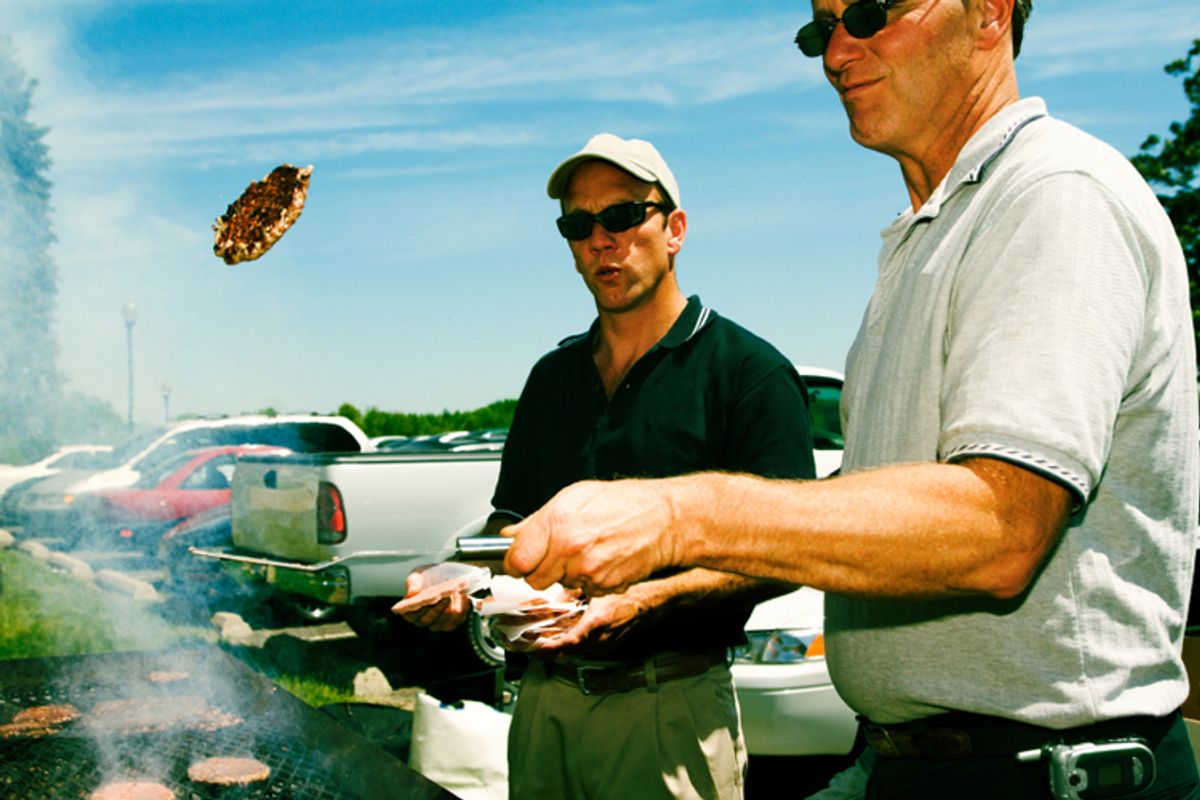 My newspaper column on Friday highlighted an easy to understand fact: According to World Bank data, the livestock industry is responsible for between 18 percent and 51 percent of all greenhouse gas emissions. My column also predicted that by simply mentioning that fact, I would receive all sorts of angry email and tweets from conservatives not refuting the data, but declaring that they will eat even more meat to prove some incoherent point about "freedom." And not surprisingly, over the weekend, the prediction came true, especially after Drudge posted a link to an outraged screed about the column (notice: The screed didn't bother to include one single data point or fact in refutation of the World Bank study).

Though I went so far as to preemptively predict such a response in the original column itself, I found myself nonetheless a bit bummed out that I was so right. Simply put, it's not fun to be correct in betting that there are, indeed, many conservatives at once proud of their alleged "family values" yet unwilling to consider even the most minute personal sacrifices in order to help avert an environmental disaster for their kids and grandkids.

Yes, it is true, there is definitely good news in the fight against catastrophic climate change. For instance, according to polls, there has been a substantial increase in the number of Americans who acknowledge the overwhelming scientific evidence that climate change is a problem and is seriously intensified by human activity. However, polls also show that most self-described Republicans believe climate change is a “hoax” (according to my email box, many of them genuinely believe that it is more specifically a vast conspiracy by scientists whose collective life mission is to enrich the all-powerful Al Gore). This is a particular problem, considering that though the GOP has been getting its ass handed to it in recent elections, the Senate filibuster means the party only needs 11 percent of the population to stop climate change initiatives that the rest of us want.

Clearly, there are no easy solutions when one of the two major political parties opts to use (in record-breaking fashion) the undemocratic institutions like the filibuster to thwart what the vast majority of the country wants and what future generations need. And there are even fewer solutions when the obstruction is built not on corruption alone (aka fossil fuel campaign contributions) but also on intense almost-too-hard-to-believe ignorance. That's a particularly acute problem because you can't combat that kind of stupidity with demonstrable facts; on the contrary, as studies show, many conservatives become more intensely devoted to their beliefs when confronted with evidence proving those beliefs wrong.

Of course, many of you reading this are among the majority who accept the findings of climate science, and in a nation that socially and geographically segregates itself along partisan lines, you may have little personal interaction with environmental know-nothingism. Consequently, you may think I'm overstating how big a problem such know-nothingism has been or continues to be, and how deeply rooted it is on the right.

For that reason, behold these 10 statements that illustrate the level of conservative ignorance -- willful or otherwise -- that we are facing when it comes to the planet's environmental crises (in chronological order):

1. "Eighty percent of air pollution comes not from chimneys and auto exhaust pipes, but from plants and trees." -- Ronald Reagan, 1979 (Note: A year later, the Washington Post noted that Reagan had to "to have his own plane be diverted from landing due to smog pollution" in Los Angeles.)

2. "The world is not running out of oil. In fact, it will never run out of oil." -- Charles DiBona, president of the American Petroleum Institute, 1994 (Note: Oil is finite, and it will eventually run out.)

3. "Could it be that man-made global warming is the greatest hoax ever perpetrated on the American people?" -- U.S. Sen. James Inhofe, R-Okla., 2003

6. "Carbon dioxide is portrayed as harmful. But there isn't even one study that can be produced that shows that carbon dioxide is a harmful gas.'' -- Rep. Michelle Bachmann, R-Minn., in 2009 somehow ignoring the myriad studies and decades of research proving CO2's climate-change effects.

7. "After researching the causes of temperature fluctuations on earth, I found the largest factor to be the sun." -- Ruth McClung, R-Ariz., candidate for Congress in 2010

8. "The temperature basically hasn't changed much since the Ice Age." -- Fox News' Tracy Byrnes in 2012, ignoring the fact that continents are no longer covered in ice and temperatures have been changing rapidly in the last few centuries

9. "The Great Flood is an example of climate change and that certainly wasn’t because mankind had overdeveloped hydrocarbon energy." -- U.S. Rep. Joe Barton in 2013 citing the biblical story of Noah to argue that scientific evidence of anthropogenic climate change should be dismissed

10. "Bicyclists are actually polluting when they ride." -- Rep. Ed Orcutt, R-Wash., in 2013 arguing that bicycling as a form of transportation is bad for the environment

This is a mere historical snapshot of a dominant pathology on the right. In it we see that coming to consensus on a crisis as large as climate change is going to be even more difficult than it may have seemed as recently as two decades ago. Back then, a sitting Republican president at least acknowledged the problem at hand.

But with that party's long history of claiming environmental challenges are to be ignored, and with its denialism now being endorsed by politicians and conservative thought leaders, we have hit the kind of stalemate that the classic film "Idiocracy" predicted -- the kind where ignorance now holds the world hostage.