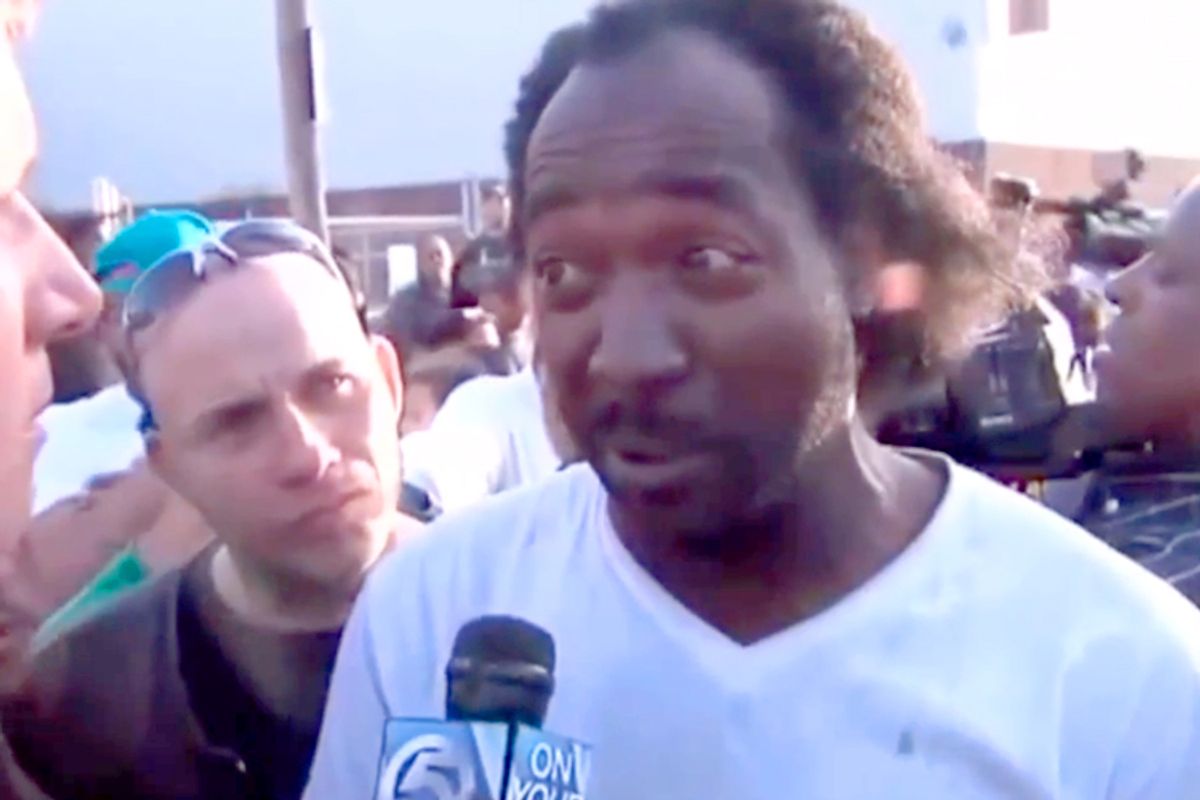 It's amazing and wonderful enough that after three women disappeared without a trace over the course of a decade, Amanda Berry, Gina DeJesus and Michele Knight were all found alive in a Cleveland house on Seymour Avenue on Monday. It's just a bonus that the rescue happened to produce your newest viral star.

As the sound bite-frenzied media descended in the wake of the dramatic rescue, it was local Good Samaritan and Big Mac aficionado Charles Ramsey who brought an earthy levity – and blunt racial context -- to the proceedings. Sure, in about an hour there will be a thousand autotuned remixes and parodies, but they will never, ever do better than the real thing.

That he's a hero who didn't hesitate to help a stranger in a moment of extreme crisis is indisputable. But Ramsey didn't just assist Amanda Berry as she fled the home owned by 52-year-old former bus driver Ariel Castro. He then turned around and wove the tale into the most straight-shooting, shockingly funny interview about violence since Antoine Dodson told his neighbors that a would-be rapist is "climbing in your windows, he's snatching your people up."

"I heard screaming, I'm eating my McDonald's," he explained to the local ABC News affiliate. "I see this girl going nuts trying to get out of a house ... So I figure it's a domestic violence dispute, so I open the door."

OK, right there, before he says another word, this guy is awesome. He's just hanging out on his porch with his fast food, and when he sees someone he thinks is having a domestic dispute, he doesn't turn away. He doesn't ignore it. Charles Ramsey, you are a full-on superstar already.

As he later told WKYC -- after grousing that reporters expected him to "tell this story without Gatorade or nothing" -- "This girl is kicking the door and screaming. So I go over there with my Big Mac ... and I say, 'Can I help? What’s going on?' And she says, 'I've been kidnapped, and I've been in this house a long time. I want to leave right now.'" The next time you see someone in distress, remember that. Remember what is possible when you ask, "Can I help?" You don't even have to put down your Big Mac.

But where Ramsey truly went the extra mile was in his later demonstration that he wasn't just quick to act – he's pretty on the ball with the storytelling. In considering the "astonishing" possibility that his neighbor was apparently now a kidnapping suspect, he remarked, "You've got some big testicles to pull this off, bro ... I barbeque with this dude! We eat ribs and whatnot and listen to salsa music! … There's nothing exciting about him." Then he paused to consider recent developments and added, "Well, until today."

In his 911 call, Ramsey reveals a similar style. After clearly identifying the street address, he tells the operator, "Check this out. I just came from McDonald's, right? So I'm on my porch eating my little food, right? This broad is trying to break out the fucking house next door to me." Later, when the dispatcher asks if she needs an ambulance, he can be heard yelling over to her, "YOU NEED AN AMBULANCE? OR WHAT?" and then directing the operator to "Put yourself in her shoes."

But that wasn't Ramsey's most on-the-money insightful moment. Nope, it came later in his ABC interview, when the reporter asked him to describe the girls' reactions to the scene. "Bro, I knew something was wrong when a little pretty white girl ran into a black man's arms," he said. "Something is wrong here. Dead giveaway. Dead giveaway. Deeeeeeeeeeaaaaaad giveaway. Either she's homeless, or she's got problems. That's the only reason she'd run to a black man."

It was a flat-out brilliant observation, one that seemed to have occurred to him on the spot but likely was a lifetime in the making. It had echoes of Chris Rock's famous comment that "I was born a suspect. I can walk down any street in America and women will clutch their purses tighter, hold onto their mace, lock their car doors." And while it carries the hard sting of truth that the mainstream media will fall all over itself when "a pretty little white girl" disappears, it was said with a wry lack of bitterness. It was instead hilarious and sad and painfully accurate, a sharp reality check in a tabloid perfect true crime tale. Somebody, please give that man a Gatorade.