Chris Christie to co-host "Today" -- while running for reelection

The New Jersey governor's TV gig for a day may be the new normal for morning TV -- but is it ethical? 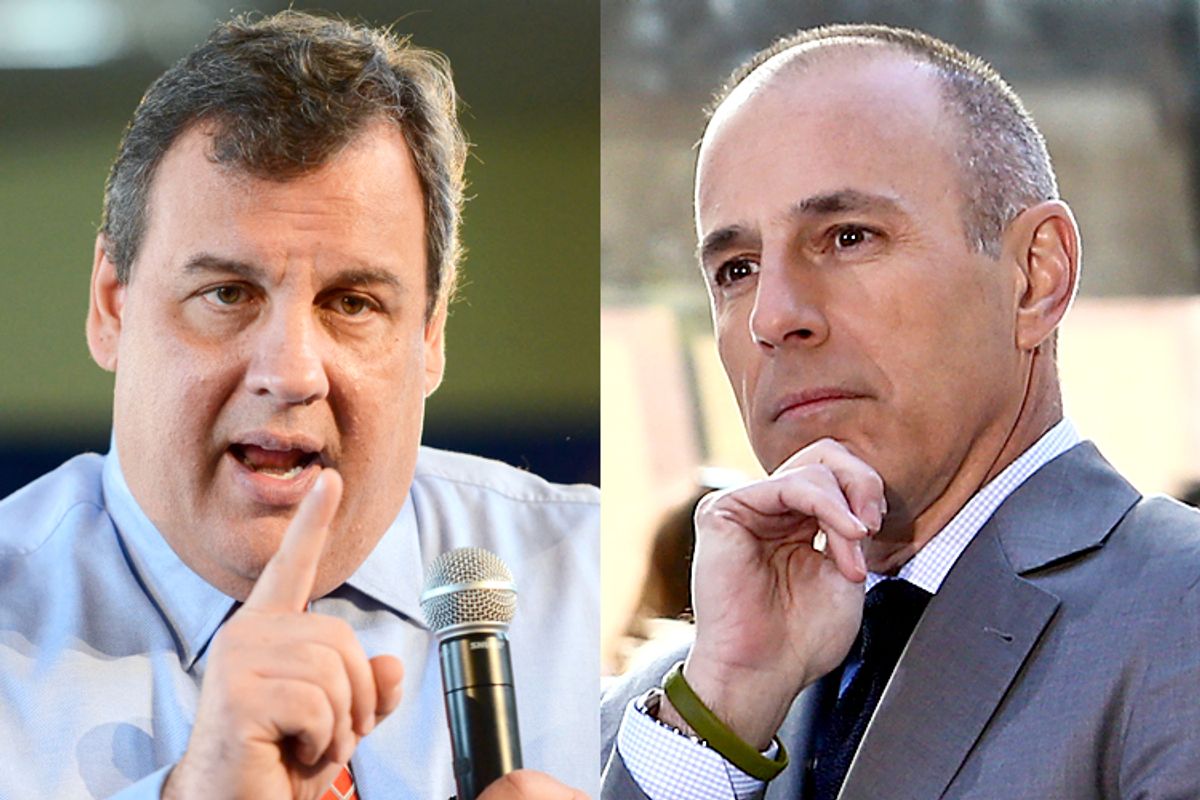 With his announcement of secret lap-band surgery, Chris Christie has been in the headlines all day. On a morning in the near future, though, he'll be covering the news, not making it.

NBC's "Today" has announced that Chris Christie is to act as a celebrity co-host for the 8-9 a.m. hour on the May 24 edition of the morning news-and-entertainment program, when it shoots in New Jersey. Christie joins past guest hosts like Sarah Palin, who memorably joined the show for a day in April 2012, giving the show a ratings win against insurgent "Good Morning America" on ABC.

But Palin was not an active politician -- the former Alaska governor already announced she was not a candidate in that year's presidential race. Christie is not merely the governor of New Jersey -- he's also running for reelection this November, and the prospect of a presidential run looms over his future.

While news shows like "Today" are exempt from any rules regarding "equal time," according to an FCC spokesperson, the decision to book Christie still raises eyebrows. Kelly McBride, a media ethics expert at the Poynter Institute, told Salon: "He's very busy: He's not going to do something if he's not getting something out of it. Because he's a fairly popular politician, 'Today' is trying to capitalize on interest in him. None of that is bad or wrong but it does create this conundrum -- when you start treating politicians like celebrities and have them host your show, it makes it very hard to be fair with your time.

"And in television especially, time is a great way to measure fairness. This really does pose a challenge to the 'Today' show's commitment to fairness."

While in the run-up to the 2012 election, Fox News contributors mulling presidential runs (including Newt Gingrich) saw their contracts suspended, that was meant to preclude potential ethics crises rather than to strictly ensure that equal time was provided to all candidates.

And unlike debate-driven Fox News programming, with plenty of room for a gaffe, "Today" tends to spotlight softer news. "Even if there are hard questions, it's still a win for him," said McBride of Christie's upcoming national media exposure. "Unless he does something that's a complete disaster, he can't lose."

Representatives for "Today" did not immediately respond to request for comment.