How a big fracking setback got overlooked

A potential 2016 contender softens his pro-fracking stance, citing unsettled science. So why is it being ignored? 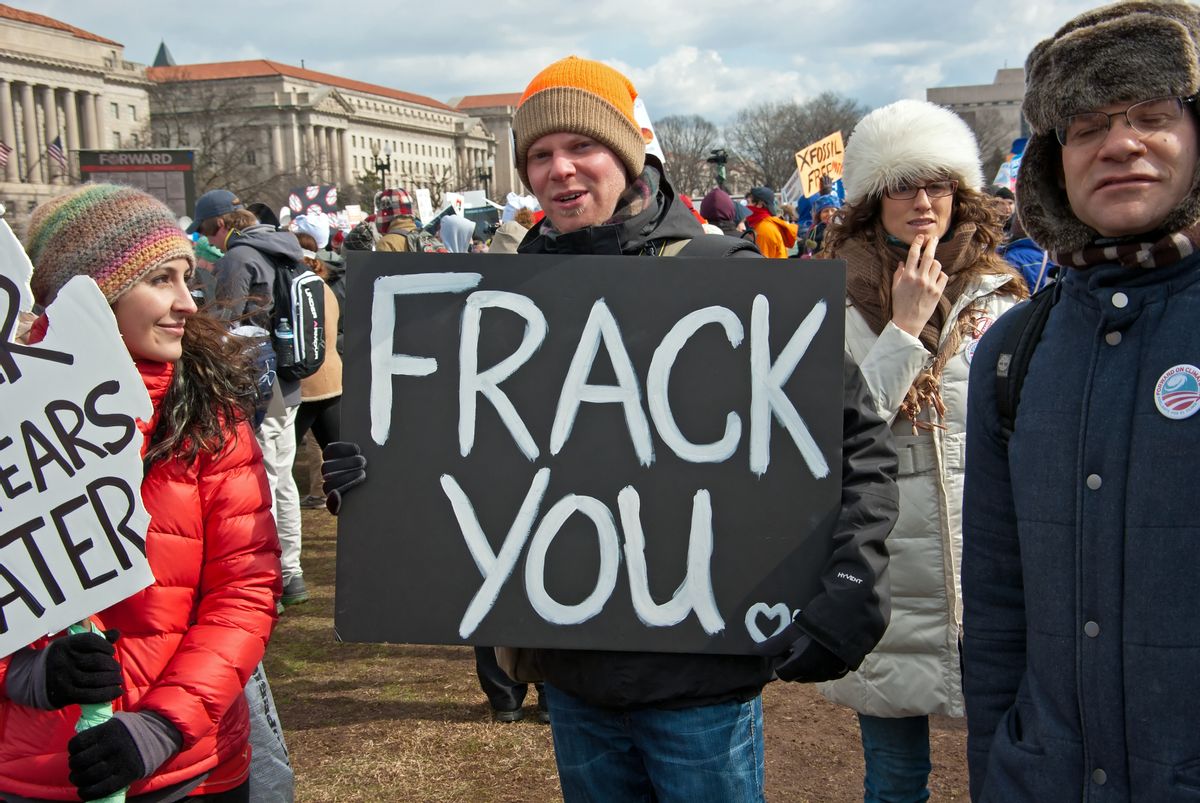 As an oft-rumored 2016 presidential candidate, a regular subject of obsequious profiles in the local and national press (including in this week's New Yorker), and the chief executive of one of the biggest fossil fuel states in America, Colorado Gov. John Hickenlooper's declarations about environmental issues carry weight. And so his stunning admission late last week is, indeed, big news in how it so definitively proves that political money buys hostility toward environmental science.

With his election campaigns bankrolled by the fossil fuel industry, Hickenlooper has long ignored troubling drilling-related data from (among others) the Environmental Protection Agency, Duke University, the University of Colorado and the fossil fuel industry itself. Instead, as he rakes in massive amounts of fossil fuel campaign cash Hickenlooper has paid back his donors by publicly declaring that "there is literally no risk" associated with hydraulic fracturing ("fracking") and by claiming to Congress that fracking fluid is safe to drink (it isn't).

That's where Hickenlooper's admission comes in. At a forum on energy issues last week, Hickenlooper simultaneously defended his assertion that fracking is perfectly safe and yet according to the Associated Press, he also "said the science on the impact of fracking is far from settled."

In other words, the chief executive of a major fossil fuel state is now on record at once claiming fracking is totally safe but admitting he believes we don't have enough science to know that his reassuring assertions are true. Worse, he is admitting the need for more scientific research into fracking while actively working to kill legislation to scientifically study the effects of fracking.

When a governor admits his absolutist positions in support of fracking are not rooted in science, it should generate headlines -- especially when that same governor has amassed a record like Hickenlooper. He is, after all, one of the fossil fuel industry's chief political spokespeople; indeed, he actually moonlights as one of the industry's official spokesmen in its paid political advertisements. Additionally, Hickenlooper is one of the industry's best political friends: He is not only right now fighting his own party's legislation to punish polluters, he has also publicly denied that global climate change is even happening; appointed one of his fossil fuel industry donors to a key regulatory position; fought state legislative initiatives that would have empowered municipalities to better regulate oil and gas operations in their midst; threatened to sue cities that regulate drilling; and reduced regulatory enforcement in the face of drilling-related spills.

Yet, despite this industry loyalist admitting his public policy positions are not supported by science, and despite the media's obsession with the Colorado governor, Hickenlooper's statements have garnered little attention. Why?

First and foremost, the Hickenlooper fans in the national press corps typically drop into Denver for a few days and produce long essays about the governor's charisma and charm -- that is, about everything other than his actual record.

The resulting hagiography subsequently credits him for much of the state's high-profile progressive successes despite the fact that most of those successes have come from the Legislature and ballot initiatives in spite, rather than because of, the governor. The one thing you don't hear much about in this kind of puffery is arguably the single most important responsibility of any Colorado governor: the responsibility to regulate our state's most financially powerful and environmentally rapacious industry. The result is that you hear more about how goofy and fun-loving and swell ol' Hick is than you do about the fact the Hickenlooper Era has coincided with a frightening rise in drilling-related spills, a precipitous decline in environmental enforcement and parts of Colorado becoming toxic hazard zones.

But obsequiousness is only part of the explanation for the media blackout. The other part is about an undying devotion to The Narrative -- that is, the meme that projects all political stories through a red-versus-blue prism, and that therefore casts hostility to science as only a Republican phenomenon rather than what it really is: a transpartisan side effect of political money.

Yes, it's true; whether pretending climate change is a hoax or casting aspersions at the notion of independent peer-reviewed research, Republican politicians tend to reject scientific data more often than Democratic politicians. Because of that, a press corps that seems only able to portray issues as partisan showdowns tends to portray the so-called War on Science as an exclusively Republican onslaught. That same press corps, though, simply cannot process or comprehend the notion of a Democrat helping his donors wage a war on science (especially one like Hickenlooper who touts his geology degree) because that kind of politician contradicts the preconceived story line.

This Narrative, of course, is only further exacerbated by what I've previously called the "No Money" rule. Simply put, reporters don't like to acknowledge the role that campaign cash plays in politicians' positions because in elite political circles, acknowledging rank corruption is considered impolite and uncouth.

Thanks to these dynamics, a revealing and incredibly newsworthy admission by a bankrolled Democratic governor is, thus, wholly ignored -- as is the science that should be driving our energy policy.