"You're disadvantaging young people, African-Americans, the poor... that's the policy of the Obama administration?" 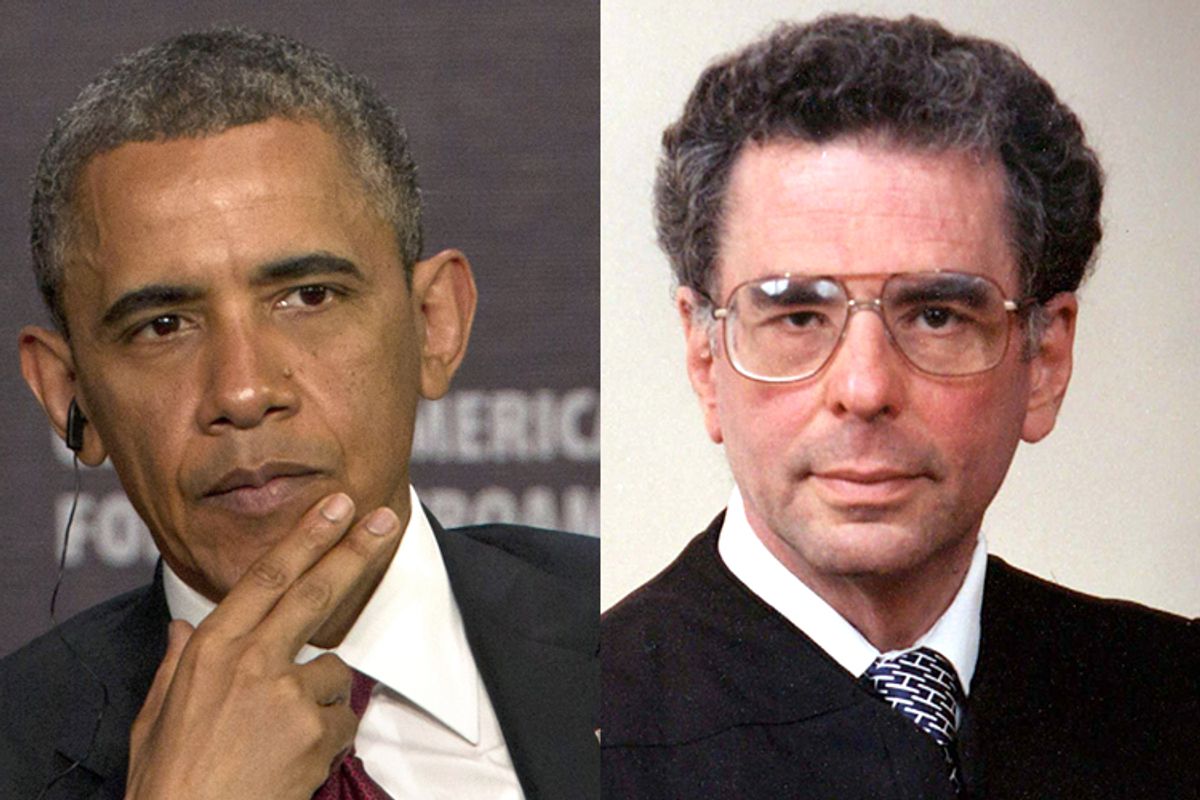 "It turns out that the same policies that President Bush followed were followed by President Obama," said District Court Judge Edward Korman on Tuesday morning, in a charged and dramatic two-hour hearing in which the Obama administration defended its arbitrary policy to limit contraceptive access.

Korman was explaining why, when previously ruling on access to Plan B emergency contraception, he had initially waited for the administration to act on its own and make the drug widely available based on scientific evidence, rather than on politics. "The process had been corrupted by political influence. I remanded because I thought with a new president" things would be different, Korman said. But in 2011, Secretary of Health and Human Services Kathleen Sebelius overruled, with the president's explicit blessing, the FDA's recommendation to lift all age restrictions, which Korman ruled in March was a decision made in "bad faith" because of the politics around sex and contraception. He ordered the administration to lift all restrictions. Instead, it accepted a manufacturer's petition to make Plan B available over the counter only with photo ID showing the purchaser was at least 15, and the Department of Justice is appealing.

This morning, Korman repeatedly slammed his hand down on the table for emphasis, interrupting the government counsel's every other sentence with assertions like, "You're just playing games here," "You're making an intellectually dishonest argument," "You're basically lying," "This whole thing is a charade," "I'm entitled to say this is a lot of nonsense, am I not?" and "Contrary to the baloney you were giving me …" He also accused the administration of hypocrisy for opposing voter ID laws but being engaged in the "suppression of the rights of women" with the ID requirement for the drug.

Frank Amanat, arguing on behalf of the administration, said that the court had overreached by ordering a particular policy rather than remanding to the agency for further review. But he could not say, in response to repeated demands from Korman, that the result would be any different if it were returned to the agency. Nor did he specify any harm that would come from making the drug more available.

"The irony is that I would be allowing what the FDA wanted. This has got to be one of the most unusual administrative law cases I have ever seen," Korman said, adding, "I would have thought that on the day I handed down my decision, they would be drinking champagne at the FDA."

Korman said the administration had engaged in a "choreography": "First the president makes a speech to Planned Parenthood and throws them a kiss. The next day you grant an application from 2012" to make it available with ID for 15 and up, in an attempt to "sugarcoat" the appeal of Korman's order to lift all restrictions. (The decision was actually announced a couple of days after the Planned Parenthood speech.)

The government didn't argue the merits of requiring a photo ID or that the drug only be sold in locations with an on-site pharmacy, but Korman made clear why he found that to be an inadequate compromise: "You're using these 11- and 12-year-olds to place an undue burden on women's ability to access emergency contraception. If it's an impediment to voting, it's an impediment to get the drug."

He cited Brennan Center statistics -- which he said Eric Holder had also cited in a speech before the NAACP -- showing that 25 percent of African-Americans of voting age don't have a photo ID, and also dismissed the government's suggestion that 15-year-olds, who usually aren't eligible for a driver's license, could use a birth certificate, since that's not a photo ID. "You're disadvantaging young people, African-Americans, the poor -- that's the policy of the Obama administration?" (He didn't mention it, but immigrants would also face additional barriers.)

Amanat said the Supreme Court has previously found that requiring an ID is a permissible impediment for the purchase of a product, and that the plaintiffs in the citizen's petition hadn't said that the issue of ID had harmed them. The government has said it put the age cutoff at 15, because Teva had asked them to in their petition. But Korman said that in previously unreleased correspondence between the FDA and Teva, the government had specifically instructed the company to reapply in that fashion after rejecting its first attempt to lift all age restrictions. When he tried to read aloud from one of those documents, a tense standoff resulted, in which Teva's representative cut in and insisted that the correspondence was confidential. But Korman did get as far as, "We are amending our application to address the Secretary's stated concern ..." In other words, the new restrictions were apparently initiated by the Obama administration as a compromise move.

Also at issue was the affordability of the drug, which can cost up to $50. Or, as Korman put it, waving toward the representative from Teva Pharmaceuticals, "Those price gougers over there." The citizen's petition filed by reproductive rights advocates had asked for all forms of the drug, including generics, to be available over-the-counter, and not just Teva's Plan B One Step, which Korman had granted. If Teva loses its exclusivity for the single-dose and over-the-counter version, which the FDA just extended for three more years, competition will presumably lower the price. The government has said that Teva is entitled to its exclusivity for three more years because it had to pay for extra usage studies and to more broadly encourage drug innovation.

Amanat argued that making a hormonal drug like Plan B over-the-counter was unprecedented, and that the public interest was served "when the government acts deliberately and incrementally." Korman cut in sarcastically, "Tell me about the public interest. Is there a public interest in unplanned pregnancies? Some of which end in abortions?"

Korman, a Reagan appointee, said he would rule on the administration's request for a stay by Thursday evening. He is expected to deny it but defer on the stay's enforcement to the 2nd Circuit, where the case goes next.