The last evangelical celebrity? Tim Tebow's firing may signal a recession among the faithful

As Tim Tebow bows out of his red-hot celebrity (for now, at least), a Christian movement faces a celebrity deficit 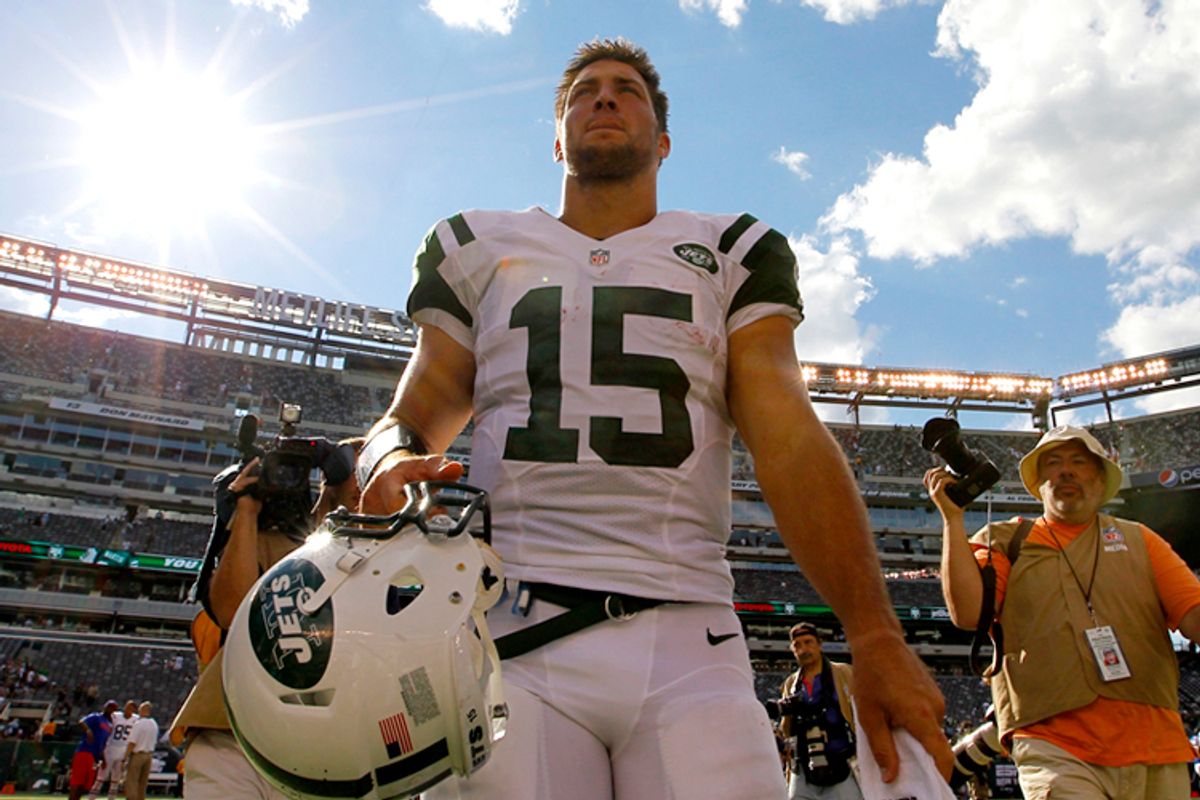 Tim Tebow, who captivated the nation in the 2011 football season with simultaneous unlikely wins and outspoken public faith, may never Tebow in front of thousands of fans again. Having been released by the New York Jets, some speculate he may need to consider a future in sportscasting, as there are few open positions he could occupy. He's been offered a position on an Omaha indoor football team, but maybe his biggest role -- as the evangelical world's biggest star -- seems fumbled.

But who is there to fill his spikes? Not so very long ago, Billy Graham counseled presidents (including President Obama, in 2010), but his heir, Franklin Graham, hasn't been nearly as popular (or, well, politic). Various celebrities tied to the evangelical label flee the designation, from actor Denzel Washington (who recently refused to tell a GQ interviewer his views on gay marriage but hinted he didn't approve) to Mumford & Sons frontman Marcus Mumford (whose parents lead the evangelical Christian Vineyard Movement but who has said, "I wouldn't call myself a Christian. [...] I have my personal views about the person of Jesus and who he was") to theater actress Kristin Chenoweth (who calls herself a "non-judgmental, liberal Christian").

In a post-Tebow era, the most prominent public evangelicals, like Houston Rockets star Jeremy Lin, are quieter about their faith. John S. Dickerson, an evangelical pastor and the author of "The Great Evangelical Recession," told Salon that these are hard times for the faithful generally. He noted that the number of evangelicals in America had long been overstated (he numbers "boots-on-the-ground" active evangelicals at 7 percent of the population), and said that movement on gay rights issues has left "evangelicalism" a dirty word.

"The culture has turned the corner, specifically on the conflict between the LGBT movement, if you call it a movement, and the evangelical movement, if you  call it a movement. Evangelicals have invited this, but they're being typecast. The cultural view of the new America is that the biblical view of homosexual sex is backward, the stuff of cavemen or the Ku Klux Klan, " Dickerson said. He noted that the recent ban on "reparative therapy" in California may sound a death knell for evangelicals' influence.

The evangelical movement has historically been closely identified with Republican politics, from Ronald Reagan's 1980s  "Moral Majority" to the "values voters" George W. Bush turned out to vote against marriage equality in 2004. Monique El-Faizy, a journalist and the author of the 2006 book "God and Country: How Evangelicals Have Become America's New Mainstream," said that this conservatism, which was at its peak as her book was released, ended up sowing the seeds of dissension and diffusion.

"The pendulum had swung so far to the right, there was a movement asking where had the compassion gone," El-Faizy told Salon. "The evangelical movement, as a political movement, fell apart. There was questioning and self-reflection -- a lot of evangelicals went to the Tea Party. They were very powerful during the Bush years. While not monolithic, evangelicals acted as a bloc in many ways. And so some of them became a little wary of these very open displays of piety."

That's not to say people changed their beliefs -- few pious people change their mind about whether to call themselves Jewish, Muslim or Catholic -- but "evangelical" is a term that's mutable. "The moniker itself is so mushy," said El-Faizy. "They argue over who is or who isn't. Kathie Lee Gifford [the talk show host] probably self-identifies as evangelical. Her brother is a Baptist preacher. But the evangelical community doesn't recognize her." (Indeed, Gifford, a graduate of Oral Roberts and author of a musical on the life of Charismatic Christian icon Aimee Semple McPherson, told me last year: "That religiosity thing — I rebel against it, I rebelled against it my entire life.")

And that's to say nothing of the fact that the few performers who publicly testify about their faith risk alienating the general public. Kevin Roose, a New York magazine reporter who went undercover at Liberty University for his book "The Unlikely Disciple," pointed out the example of former teen idol Kirk Cameron, who's been outspoken about his faith and against gay marriage. "The second half of his career has been devoted to evangelizing and doing programs that are involved in the Christian mission," like the "Left Behind" movie series.

"That kind of willingness to wear it openly," said Roose, "is the exception rather than the rule. To a certain extent it's made him radioactive in Hollywood."

It's possible to have an entire career focused on the evangelical market, even as it dwindles -- and, indeed, that explains why evangelical performers and music acts tend not to break through, while those who'd prefer broader success keep mum. "There is a parallel culture that artistically is subpar," said Dickerson, the pastor. "You can get Christian T-shirts or go to a Christian amusement park. There are evangelicals who live in an evangelical bubble." Roose noted that he'd been to a Christian stand-up comic act, though the separation was growing less and less relevant to the young faithful: "It's not like Christians don't know who Jay-Z is."

Just about the last bastion of America that hasn't been cleaved in two is sports; there's no other sports league that evangelicals can enjoy, as there are film and music industries. And, but for endorsements, public opinion doesn't really matter: "If you're a great athlete scoring touchdowns, you can evangelize as much as you want," said El-Faizy, noting that post-game speeches are often riddled with the references to God that are reminiscent of years-ago Grammy ceremonies.

But outside sports (a field that's at once the last safe space for open religious testimony and, until last week, the last space closed off to open homosexuality), evangelicals in many walks of life -- including celebrities -- aren't thrilled about the chance to talk about it. "Is the brand redeemable?" asked Dickerson, who suggested that public advocacy was on its way out as evangelicals decided to focus on the aspects of their faith pertaining to Jesus' message of love. "If everyone out there who was in a position of influence who was a closet evangelical said, We're all evangelical and the movement is cool, could it rebrand the movement? Or have there been too many news stories about people who picket funerals saying 'God hates fags'? What a lot of young evangelicals believe is it's not worth the effort."

Had he thought, over the past two years, that Tebow's public prayer and professions of virginity had been helpful or hurtful? Dickerson paused. "There's a passage in Romans, Chapter 14, where the Apostle Paul says that each believer needs to live out the faith of their own convictions. I don't think it's my place to judge him."