From Benghazigate to Pastagate, the Watergate comparisons have gotten out of hand and need to stop 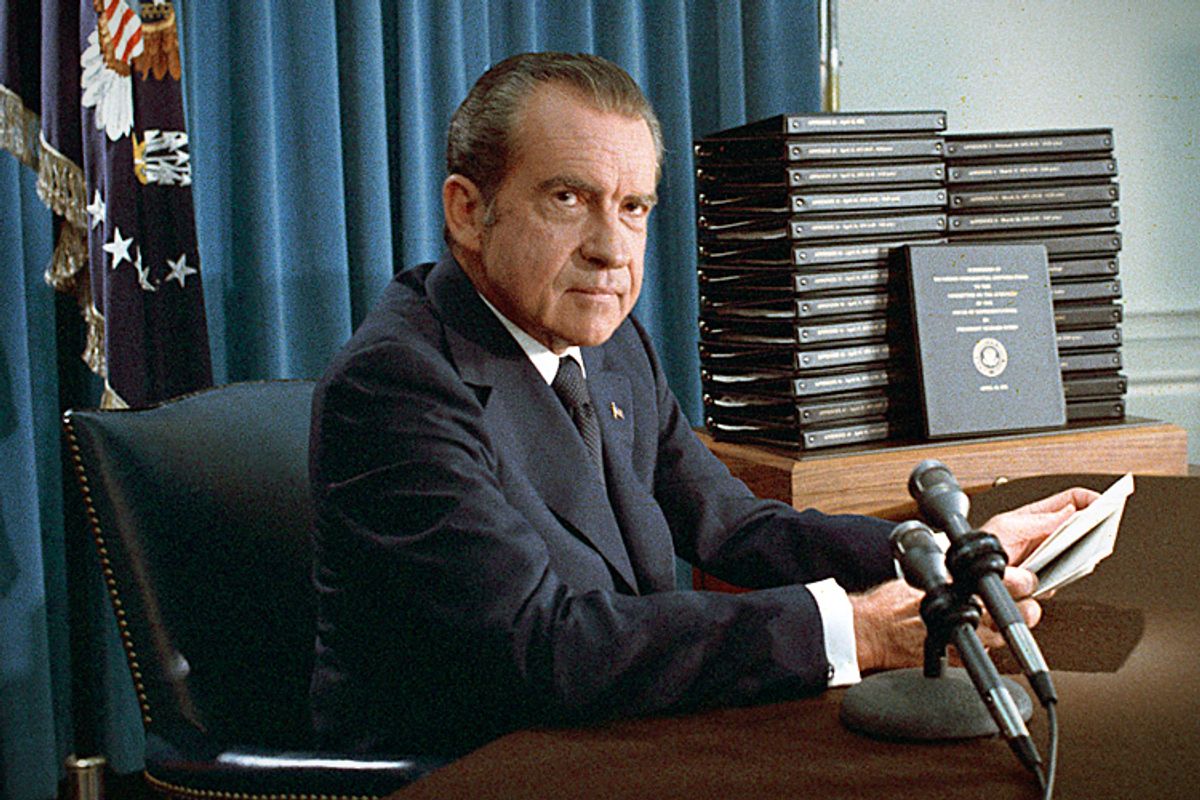 Benghazi is back in the news today with a House Oversight Committee hearing, and that means Watergate is too. Because 40 years later, anything and everything gets compared to Watergate for some reason. It has to stop.

You could call #Benghazi Obama's Watergate, except no one died.

Mike Huckabee echoed the sentiment on Sunday, saying Benghazi will be Obama's Watergate or worse because, "as bad as Watergate was -- because it broke the trust between the president and the people -- no one died." But Huckabee and Stockman are just cribbing John McCain, who's been saying the same thing since October. Naturally, Sean Hannity, Bill O'Reilly and the rest of the crew at Fox News are all over the comparison as well

The problem with calling Benghazi Obama's Watergate (aside from the fact that the comparison is bogus) is that Obama has already had almost a half dozen other "next Watergates," and so far none of them have lived up to the hype.

House Oversight Chairman Darrell Issa, the man leading the hearings into Benghazi today, is particularly fond of the comparison. He said Fast and Furious was "like Watergate," said the Department of Homeland Security's FOIA process was "Nixonian" -- a charge he would go on to level again -- and alleged that the White House's involvement with former Pennsylvania Democratic Senate candidate Joe Sestak was a "concerted scheme and cover-up strategy not seen in Washington since the days of Watergate."

And it's not just Obama. Mitch McConnell said the secret recording of his meeting with aides was "much like Nixon and Watergate." Before that, Whitewater, the Clinton-era real estate scandal, got compared to Watergate, as did a 1996 Clinton campaign finance mini-scandal, as did George W. Bush's entire presidency. Indiana Republican Rep. Dan Burton said the Clinton FBI files controversy "goes beyond Watergate in its seriousness."

Every controversy, from Benghazi (Benghazigate) to a Janet Jackson wardrobe malfunction (Nipplegate) to the hacking of climate scientists' emails (Climategate) to the unwelcome presence of horse meat in food (Horsegate) now must, as if my some decree, get a "-gate" suffix.

Even other countries name their scandals after the Washington apartment complex of the Nixon break-in for some reason. Earlier this year, Quebec had a "Pastagate" scandal in which the province's overactive language police tried to get an Italian restaurant to stop using Italian words on their menus, instead of their French equivalent. This is getting out of hand.

To review, Watergate led to the president of the United State's resignation after it was revealed that he had authorized a break-in at the Democratic National Committee and then covered it up. By the resignation standard, there have been exactly zero Watergates since Watergate. Even the Monica Lewinsky scandal, in which a president was actually impeached, proved to not be much of a Watergate. Bill Clinton stayed in office and is now one of the most popular politicians alive.

And Benghazi is certainly no Watergate. Even right-wing radio host Neal Boortz scoffs at those making the comparison, writing in TownHall, "Forget it. Ain’t going to happen. You’re dreaming." Benghazi seems to be -- at worst -- a case of criminal neglect, not intentional malfeasance, and as much a product of partisan point-scoring as actual wrongdoing.

Invoking the term every six months undermines the seriousness of what actually happened in the Watergate scandal while elevating otherwise humdrum political controversies. As John Dean, who was involved in the actual Watergate coverup, quipped when McConnell invoked the scandal, "I think falsely charging somebody with a Watergate type activity is somewhat Nixonian."

Did you even remember the Joe Sestak controversy -- Obama's first "next Watergate" -- until now? Neither did we.