Really, with the gay jokes?

This week bro-medians are delighting in comedy about guy-on-guy action. Fellas, it's time for some new material 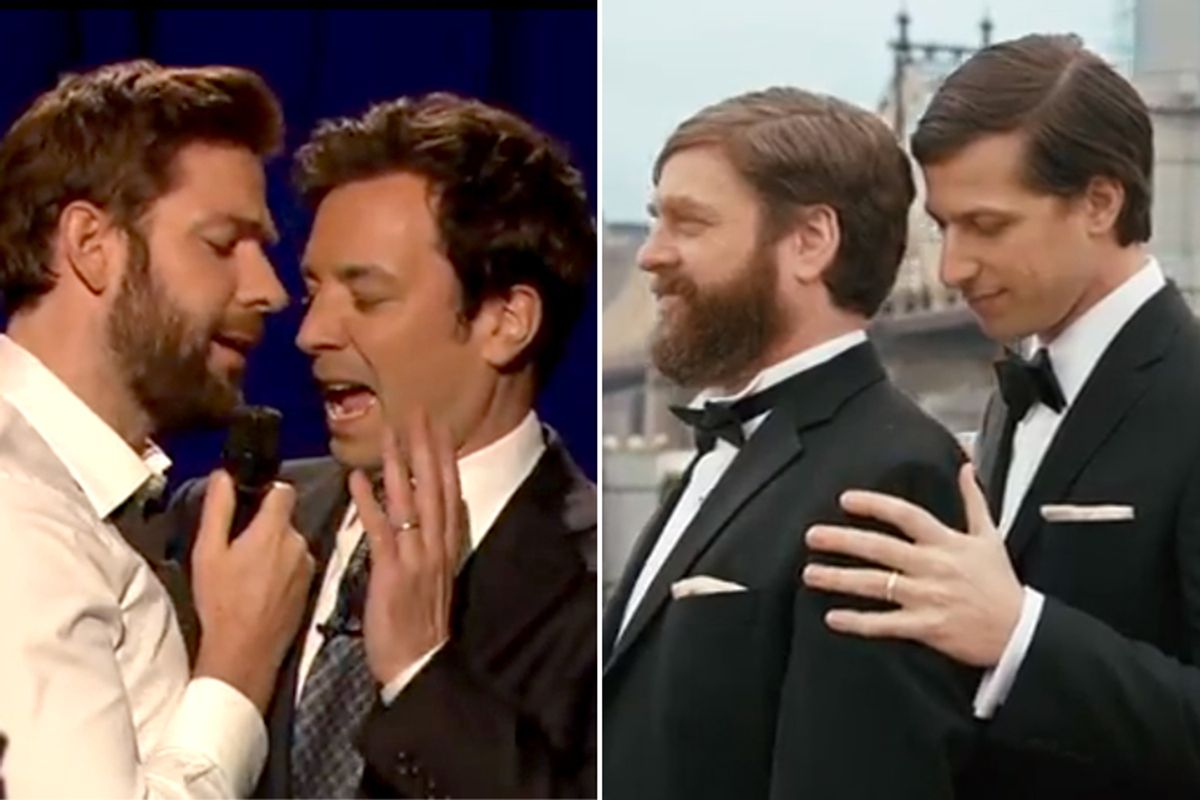 Bros, you are on notice: No more jokes about gay sex -- at least for the rest of the week. Between "Late Night With Jimmy Fallon's" homoerotic lip-sync skit and Zach Galifianakis' latest episode of "Between Two Ferns" featuring gay marriage as a punch line -- both of which took off today -- we have officially reached maximum capacity for jokes made by straight dudes about guy-on-guy sex.

In case you missed these viral videos, a recap: On Tuesday's "Late Night With Jimmy Fallon," the host challenged "The Office's" Krasinski to a lip-sync off. They went back and forth, taking turns performing songs of their choice -- notably, songs by high-pitched women for maximum laugh factor -- and ended with the grand finale of Krasinski pretending to sing "I'll Make Love to You" by Boyz II Men and waving Fallon onto the stage for an intimate embrace. This morning, several publications ran coverage of the skit with the apparently hilarious screenshot of the two faux-crooning with their faces inches apart. (For the record, Salon posted the video, but ran with a different still.)

The "Between Two Ferns" video starts out with Galifianakis interviewing "Spring Breakers" star James Franco, but before long, it transitions into a music video parody by Andy Samberg's Lonely Island. It features the neon-clad rapping male trio engaging in all of the heterosexual rites associated with Spring Break -- wet T-shirt contests, barfing, et-ceter-sigh -- with a twist thrown in: gay marriage! Here are some sample lyrics, "Giant sombreros, show us your titties, Creatine shakes, marry a man." Then there's this, sung amid some MTV-esque debauchery: "Let's get fucked up, then find Mr. Right and get monogamous."

Yes, comedy often employs the unexpected for laughs. It's quite effective! But rather than coming off as a skewering of heterosexual machismo and misogyny, the skit seems to delight in the schadenfreude of seeing straight guys perform homosexuality. How many times have we seen Samberg and his male "SNL" counterparts kiss each other for laughs? It's a tiresome hallmark of his comedy (see here), as well as Jonah Hill, Paul Rudd and many other popular bro-medians.

It's amazing that after a year of marriage equality wins, gay sex is still a favorite punch line. Sure, it's possible to effectively use homosexuality to make fun of homophobia, and I appreciate some straight-guy "Boyz II Men" lip-syncing as much as the next gal, but too often gay-sex jokes don't move beyond the juvenile, squirming observation of, "Look, it's two dudes kissing!" Don't get me wrong, I'm not trying to censor politically incorrect comedy here. I'd just like to deliver a message -- consider it a pep talk -- to all bro-medians: Please, put a hold on the gay sex jokes until you come up with a really good one.