As another publication weighs in on "millennials," we look back at the decade's most protracted debate 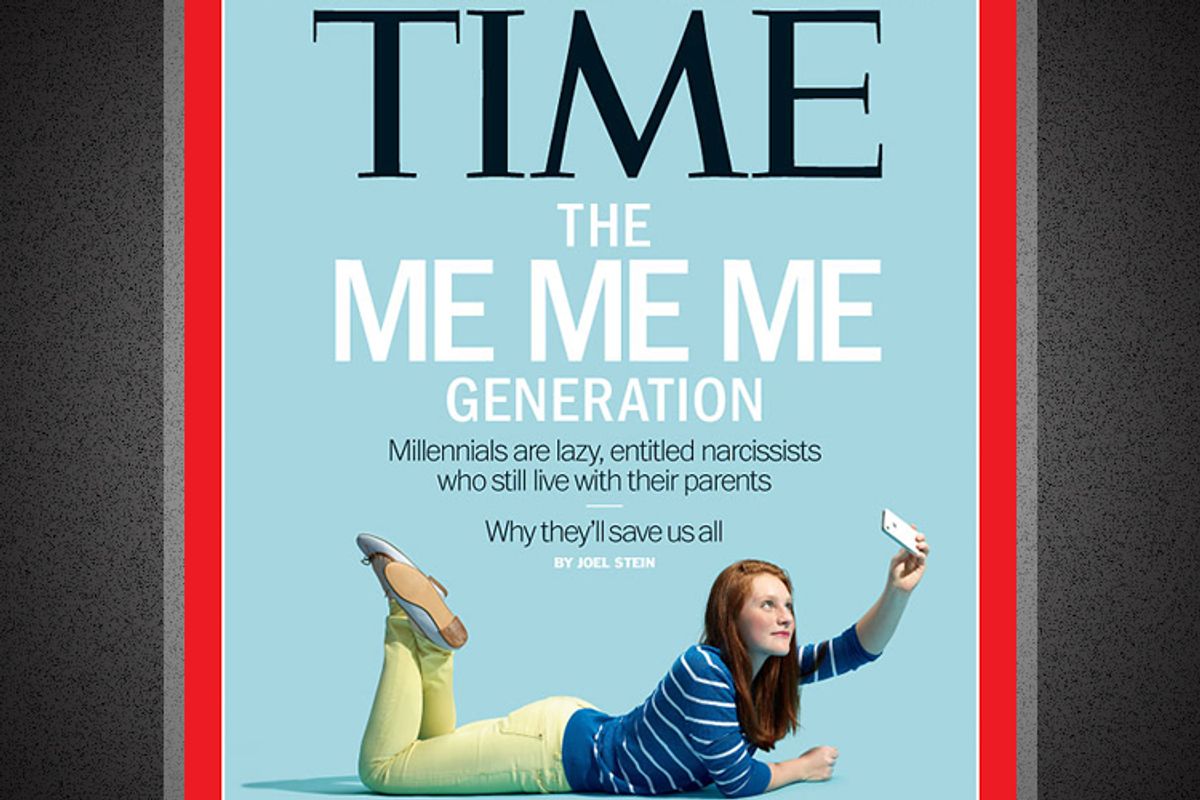 Time magazine has gotten the Internet's attention once more with a grabby cover image: In the footsteps of the breast-feeding mom and "Don't Hate [Sheryl Sandberg] Because She's Successful" comes a cover image of a young woman posing for an iPhone self-portrait. She's nicely dressed, in pastel jeans and ballet flats, and she's described this way: "The Me Me Me Generation: Millennials are lazy, entitled narcissists who still live with their parents. Why they'll save us all."

This double-axel troll -- millennials are the worst! All they do is play on their smartphones! But, actually, they are great! Columnist Joel Stein tells you why! -- is admirably executed. (A video at Time's website indicates that the full story, not yet online, is unlikely to be positive: Stein, the writer, "lives like a millennial" by compulsively documenting himself, a trope that felt a little clichéd when describing the Gen-X'ers of "Reality Bites.")

But Time is hardly the only publication to devote significant space to the plight of "millennials," broadly defined as the Americans born between the early-to-mid 1980s to the early 2000s and thus into the worst job market in generations. (The colloquial meaning of "millennials," as Time's cover image and text shows, is "wealthy white people who live with their parents because they're lazy!")

The rise of entertainments made by millennials, from books to websites to Lena Dunham's "Girls" -- an SEO-ready flashpoint in the "millennials" discussion -- has fueled an ongoing discussion over the 2010s about what exactly we can know about millennials. Perhaps, indeed, they are unknowable. But one thing seems clear: Whether or not millennials feel entitled to attention, an older generation of magazine editors and writers can't look away.

Here are some broad descriptions about the generation known as Millennials: They’re narcissistic. They’re lazy. They’re coddled. They’re even a bit delusional.

Those aren’t just unfounded negative stereotypes about 80 million Americans born roughly between 1980 and 2000. They’re backed up by a decade of sociological research.

The economy is poor; even a higher professional degree, the first refuge of the risk-averse, may not guarantee a job. And average college debt, adjusted for inflation, has tripled since the late nineteen-eighties. (It’s still growing.) In the face of these and other shifts, the voices of previous experience seem questionable. It is not clear that the grownups know what’s really going on.

I’m sure the fact that there is a kind of vocabulary in place to describe the inadequacies of people our age made it easier for certain people to make unfavorable assumptions about me. Even so, I don’t know how else you tell a story. Would people prefer to be presented with an abstract collage about 20-somethings that offers no cohesion or verdict?

To older, more experienced workers, the new generation of employees known as Millennials, or Generation Y, might seem as though they came from a different planet. Savvy with technology, impatient for progress and seeking reward beyond a paycheck, they're often shaking up traditional ways of doing business.

“I know there is this idea of our generation being narcissistic and people feel that [website Thought Catalog] feeds into that,” [author Ryan O'Connell] says. “But things that people consider really personal I don’t. Writing about sex is something that everyone experiences. It’s universal, so why not write about it?”

If one more person compares my generation to Lena Dunham's troubled "Girls," I am going to lose it.

"Girls" was a bold defense (and a searing critique) of the so-called Millennial Generation by a person still in her twenties.

Generations are social constructs. There is no chemical or biological difference between Gen-Xers and Millennials, but we talk about them as if they were different species. That Gen-Xers grew up "independent" and Millennials grew up "entitled" aren't anthropological observations. Rather, they're marginally useful stereotypes.

And so we find ourselves living among the scattered ashes and spilled red wine and broken glass from a party we watched in our pajamas, peering down the stairs at the grown-ups. This is not a morning after we are prepared for, to judge by the composite sketch sociologists have drawn of us. (Generation-naming is an inexact science, but generally we’re talking here about the first half of the Millennials, the terrible New Agey label we were saddled with in the eighties.)

For the past few years, it’s been open season on Generation Y — also known as the millennials, echo boomers or, less flatteringly, Generation Me. Once described by the trend-watchers Neil Howe and William Strauss as “the next great generation” — optimistic, idealistic and destined to do good — millennials, born between 1982 and 2002, have been depicted more recently by employers, professors and earnestly concerned mental-health experts as entitled whiners who have been spoiled by parents who overstoked their self-esteem, teachers who granted undeserved A’s and sports coaches who bestowed trophies on any player who showed up.

Emerging adults are both different from everyone else and totally obsessed with talking about how different we are. I fear that by engaging in this very conversation I am shamelessly playing to type.

Even if some traditional milestones are never reached, one thing is clear: Getting to what we would generally call adulthood is happening later than ever. But why?