Thirteen miles with my teenager 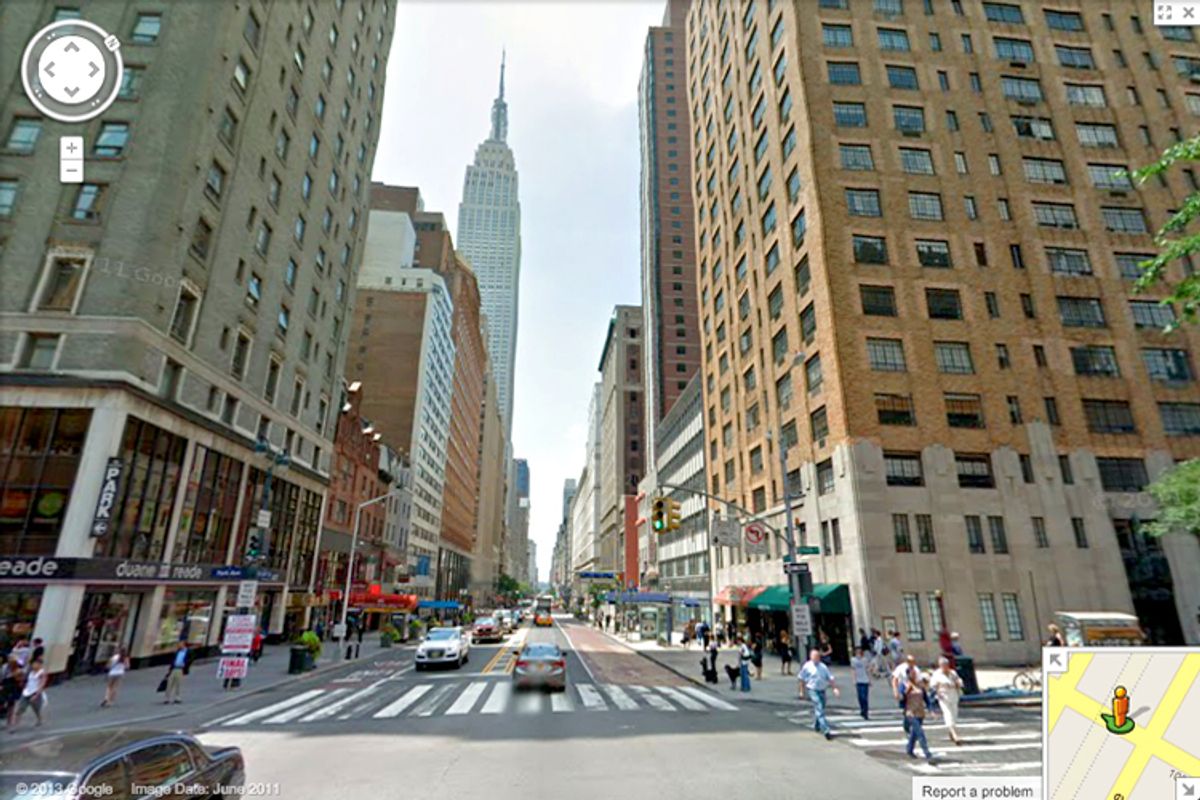 I live on a tiny island. A mere 13.4 miles from end to end – shorter than Nantucket – and so narrow in points you can walk from its western shore to its eastern edge in minutes. You'd think in a place so small that it'd be impossible not to know every nook and cranny of it. But Manhattan is a wildly provincial place. To look at most maps of it, you'd think it disappeared somewhere around 125th Street, though it goes on for another 100 blocks. To watch movies or read New York Times stories about trendy restaurants or interesting locals, you'd get a picture of place that exists only from the Upper West Side to Wall Street. But for the past seven years, my vantage point from the northernmost tip of the borough has served as a daily reminder that this city is more complicated than that. It's far more than meets the eye. It's a work in progress. It's beautiful and mysterious and frequently exasperating. It is, in fact, in many ways very much like my 13-year-old daughter. And so recently, one bright spring day, she and I decided to go exploring together in the place we call home.

Lucy and I had done a similar walk a year ago, to celebrate the end of my primary course of cancer treatment. It had been a good walk but a tough one, through morning drizzle and afternoon blisters, up hills and through parts of town with no bathrooms or benches. When we finally made it home, we were exhausted – and determined to do it again.

In the months that followed, as I trained for the New York Marathon, my feet pounded even more terrain. I ran through Bay Ridge and Bed Stuy, over the Queensborough Bridge and around the Bronx, and through Staten Island, right before the hurricane. The experiences gave me a richer understanding of my city and its neighborhoods as well as an appreciation of the ways in which its landscape changes from block to block. And later, as the bleak days of a New York City winter began to warm and lengthen, the prospect of another long walk became a beacon of hope, a promise that another spring really would return.

Another spring. It's something the past few years have taught me not to make assumptions about, not to take for granted as my due. In that time, my loved ones and I have experienced the ravages of disease and a string of viciously untimely deaths; and along the way we've lost our ability to casually, confidentially plan for the distant future. To say we'll take a walk when the weather gets warm isn't a sure thing any more. But it's something deeper and more powerful, too. It's a declaration of intent, a statement of profound hope.

It was not yet fully daybreak when I shook Lucy awake that Saturday. The sky was still purple and the lights on the George Washington Bridge were still shining distantly as we groggily put on our sneakers and took the subway all the way down to South Ferry. When we got there, we paused to look out together as the early morning light bounced off the river, gleaming on the Statue of Liberty. "You ready?" Lucy said. And then we turned around and started walking home.

We walked to the site of the new World Trade Center, and I told Lucy again about the morning the planes hit the towers. How she'd been sleeping in her crib when I felt the earth shake and saw the deluge of dust and debris rain down suddenly outside, and just as abruptly, stop. We walked over toward the Brooklyn Bridge, gazing in the direction of her first home and the place where her little sister was born. We made our way through the West Village toward Gilda's Club, where we've spent so many evenings and made and lost so many friends. We walked the length of the High Line on toward the Empire State Building and into a Times Square teeming with tourists, scuzzy Elmos and one naked cowboy. We made wishes in the fountain at Lincoln Center, ate edamame at Lucy's favorite Japanese restaurant and watched cherry blossom petals blow around Central Park like pink snow. We had warm brownies at a café in Harlem and took pictures at Royal Tenenbaum's house, scanning the skies for falcons. We walked past expensive condos and apartment buildings where neighbors sat outside on lawn chairs drinking soda. We walked along the river and spotted a groundhog in Fort Tryon Park, and finally, as the sun was going down, we made our way into the familiar streets of our neighborhood, down into our park, where at least one baseball game is always in progress from April till November. Finally, we reached the tip of the island.

We had no movies to distract us, no interrupting texts, no music to sing along with. Just our feet and each other's company. A lot had changed in the 12 months since we'd walked together like this. My daughter is now a teenager, and her life is full of all the drama and absurdity and complications and often outright hilarity of seventh grade. I'm now on treatment maintenance, which means that merely being awake no longer automatically makes me desperate to be asleep. But what hasn't changed, the thing that matters the most to me, was that a year later my kid still wanted to spend a whole day with her mom. We spent 12 hours walking and talking together that Saturday. In that time, I learned that, unlike her sister, she doesn't want a hamster because she says she's not yet ready to love anything else that might die on her. She learned that the way women in their 40s mend their spats is not at all dissimilar from the way 13-year-old girls discuss their slumber parties. We talked about how much she still misses the friend who moved away in second grade and about my first job out of school at a museum in midtown. It turns out, you can cover a whole lot of personal ground in 13-plus miles. It was one of the best days of my whole life. It's the kind of day I hope everybody gets at least once – a day to discover a place you thought you knew, to converse sometimes and be quiet sometimes, and to watch the sun move across the sky with someone you love very much.

When my cancer was really bad and I thought I might die soon, I told a friend that I knew none of us has forever, but I really wanted just a little bit more time. I was given it, in abundance. But what I still treasure most are those amazing little bits of time. The fleeting scent of lilacs in the park. A day to be a tourist. The uninterrupted hours spent with a kid who's turning into a remarkable young woman. The chance to take the scenic route. The gift of being able to put one foot in front of the other. And the infinite pleasure of coming home again at the end of a long, sweet day.