How the GOP cast Obama as Gatsby (minus the parties)

He's a flawed, handsome idealist with a puzzling life story, hounded by his enemies as a sinister outsider 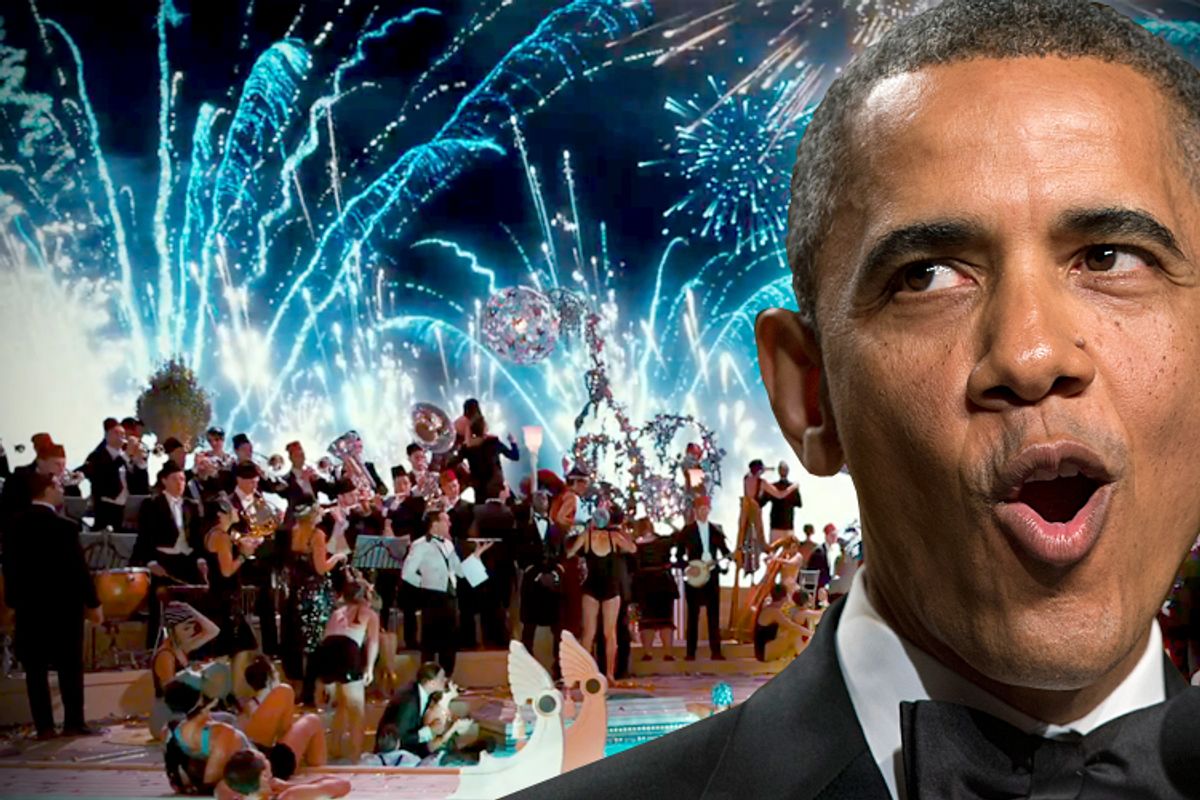 One of the biggest differences between F. Scott Fitzgerald’s “The Great Gatsby” and Baz Luhrmann’s overblown new movie version, as Richard Brody of the New Yorker has pointed out, is that Fitzgerald’s book was (among many other things) a work of prescient social criticism, published at the very height of the Roaring '20s boom, whose dark side he saw so clearly. A few years later, the stock market crash and the ensuing Great Depression would smash all the champagne glasses, exposing the Gatsby-scaled dream of ever-widening affluence (which was only ever available to white Americans above the poverty class) as a mass delusion.

Luhrmann’s “Gatsby” may have similar ambitions, but it reaches us at a different kind of historical moment, several years after a major crash, when we apparently haven’t learned our lessons or abandoned our delusions. Our culture seems more fixated than ever before on the specter of immense wealth, even as the gap between rich and poor widens to levels never imagined in Jay Gatsby’s time. Polls suggest that the public no longer associates working hard with getting rich, and depending on your perspective, that either reflects a decline in morality or an increase in comprehension. Gatsby himself is everywhere as a cultural signifier; every briefly famous rapper, overpaid athlete or reality-TV sensation is following in the footsteps of onetime North Dakota farm boy James C. Gatz, whether they know it or not.

Arguably we don’t need a new movie of “The Great Gatsby,” both because we already had a better screen Gatsby this year (James Franco’s chrome-grilled Florida rapper in “Spring Breakers”) and because the story keeps welling up all over the place as a defining myth of American life. One of the problems the Republican Party faces in its relentless, boats-against-the-current quest to marginalize and demonize Barack Obama is that the Right has half-consciously cast the president, in our delusional theater of national politics, in the tragic-heroic, doomed-but-appealing role of Jay Gatsby.

Bear with me a minute; it’s not as crazy as it sounds. Obama-as-Gatsby is a charismatic and good-looking outsider who rose from obscure origins through a process of self-invention. His life story has some murky passages and – as people who write all-caps emails love to remind the staff of left-leaning online publications – even his name has been subject to change. One could argue that the Hawaiian-born child of two peripatetic intellectuals had to learn to play the role of big-city African-American politician just as much as Jimmy Gatz had to learn to play an old-money "Oxford man."

In the book, Gatsby’s likable personality and ostentatious display turn out to be a front for old-fashioned organized crime -- and specifically for Jewish gangster Meyer Wolfsheim, whom Fitzgerald closely modeled on Arnold Rothstein, the real-life racketeer who really did fix the 1919 World Series. In various more-or-less paranoid forms, the Right has long suggested something similar about Obama, who is seen as the smiling face of sinister alien forces: A Kenyan-born, crypto-Muslim, Red-inoculated 1960s radical whose real bosses are Bill Ayers, Jeremiah Wright, Malcolm X and -- I don’t know -- the stuffed corpse of Lenin.

Of course there’s one glaring difference between Obama and Gatsby, which feeds into the obvious current of racial bigotry and panic behind the obsessive Right-wing quest to tar Obama as a “fake president” who is fundamentally un-American and to block even his most routine appointments or legislative measures: While the GOP leadership in Congress is slightly too savvy to openly endorse far-right, birther-type conspiracy theories, plenty of prominent Republican members have wandered into that territory in nod-and-wink, “just asking questions” mode. I’m inclined to believe that John Boehner and Mitch McConnell are spineless, soulless political insects rather than crazy people (although that’s open to debate), but their party represents a deranged and deeply racist base of true believers who would give nearly anything to escape from this Philip K. Dick alternate universe where a you-know-what could actually wind up in the White House.

This too is present in “The Great Gatsby.” If the Republicans have assigned Obama the part of Gatsby, they’ve locked themselves into the unhappy role of Tom Buchanan, the brutish, old-money white supremacist. We like Gatsby, or at least Nick Carraway, the book’s narrator, does his best to convince us to like him: There’s something innocent about Gatsby's brazen ambition, his phoniness, even his corruption. Nobody likes Tom, whose attempt to brand Gatsby as an outsider who doesn’t belong in high society is closely tied to his repeated references to a paranoid racial jeremiad called “The Rise of the Colored Empires.” (Fitzgerald was evidently thinking of historian Lothrop Stoddard’s notorious “The Rising Tide of Color Against White World-Supremacy,” a hot cocktail-party topic in the 1920s that retains a covert following on the anti-immigration Right today.)

“Civilization’s going to pieces,” Tom tells Nick in one of the sharpest satirical passages in “The Great Gatsby.” “I’ve gotten to be a terrible pessimist about things.”

“The idea is if we don’t look out the white race will be – will be utterly submerged. It’s all scientific stuff; it’s been proved.”

"Tom’s getting very profound,” said Daisy, with an expression of unthoughtful sadness. “He reads deep books with long words in them. What was that word we —"

"Well these books are all scientific,” insisted Tom, glancing at her impatiently. “This fellow has worked out the whole thing. It’s up to us, who are the dominant race, to watch out or these other races will have control of things."

"We’ve got to beat them down," whispered Daisy, winking ferociously toward the fervent sun.

“You ought to live in California —” began Miss Baker, but Tom interrupted her by shifting heavily in his chair.

“This idea is that we’re Nordics. I am, and you are, and you are, and —” After an infinitesimal hesitation he included Daisy with a slight nod, and she winked at me again. “— And we’ve produced all the things that go to make civilization — oh, science and art, and all that. Do you see?”

There was something pathetic in his concentration, as if his complacency, more acute than of old, was not enough to him any more.

It’s easy to get distracted there by the wonderfulness of Fitzgerald’s dialogue, but my point is that this is one of the first and best 20th-century descriptions of the paranoid and xenophobic American mentality we still see all around us today. Tom has no idea what he means by “civilization,” and he has zero interest in “science and art, and all that,” but his “pathetic” sense of racial victimization and persecution -- while being one of the richest men in America -- and his quest to expose the Jewish criminal roots of his wife’s lover are two sides of the same coin.

Whether Tom actually believes these crackpot racial theories is beside the point, since they’re just a way of justifying and even ennobling his own wealth and power. In a similar vein, the Republican leadership in the House and Senate has managed once again to steer debate away from all substantive issues and go back to Benghazi and Obamacare – despite running and losing a national campaign on those issues barely six months ago.

Do Boehner and McConnell privately believe that whatever bureaucratic malfeasance followed the Benghazi attack is an impeachment-level scandal? Or that voting to repeal the president’s signature health care law -- for what is either the 34th, 35th, 36th or 37th time, depending on how you count -- will finally get the job done? Of course not. But those issues are useful for many short-term, cynical reasons. They serve to justify permanent political paralysis, they reassure the rabid Republican base that Obama is an illegitimate president who coddles terrorists and has a secret hammer-and-sickle agenda and, hypothetically, they muddy the political waters and gum up the works so much that a GOP return to power starts to seem plausible in 2014 and 2016.

In the book, Gatsby’s romantic quest is presented as noble, after its warped, aesthetic fashion. But Gatsby lives in a fantasy world and is defeated in the end, while Tom Buchanan just goes on being rich somewhere else. There are much better cultural and political reasons to be skeptical about the claim that Obama’s two victories signals a permanent electoral shift away from the Republicans. But if you want a literary metaphor, there it is.

In fact, the more I think about the parallels between Obama and Gatsby the more seductive I find them, though presumably not for the same reasons that the president’s Right-wing enemies might. I see Obama as a man of unquestioned idealism with a fascinating life story, who personally symbolizes many of the best possibilities of America. But that’s not to say I hold out much hope for his presidency at this point. Like Gatsby, and like the rest of us, he is not a free agent; we constantly have to be reminded that American individualism is a myth. One faction of global capital stands behind him with its hands on his shoulders (if there is indeed more than one faction), and he faces powerful historical forces that long predate him, and that no individual can control. He made us believe in his beautiful green-light vision of a renewed democracy, for a minute there. Whether it really meant anything and was worth pursuing – well, that’s tough to say.