"Felt" is an imaginative new reality TV show with puppets, and Baz Luhrmann's "The Great Gatsby" is a spectacle 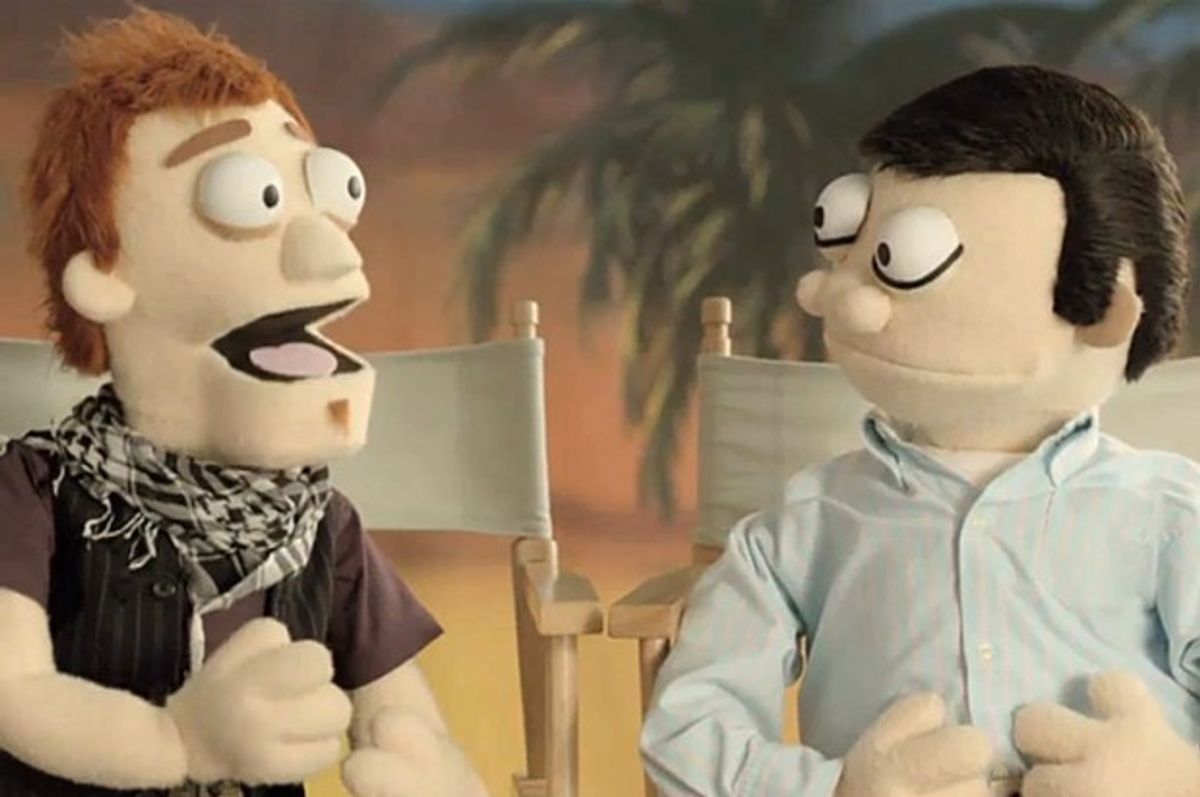 The American Psychiatric Association gears up to deliver the new DSM-5, the manual that serves as the mental health industry's bible, but with "The Book of Woe," psychotherapist Gary Greenberg cautions Americans to question the authority of a guide that is largely "built on fiction." Laura Miller writes:

“Psychiatric diagnosis is built on fiction and sold to the public as fact.” So writes psychotherapist Gary Greenberg in “The Book of Woe: The Making of the DSM and the Unmaking of Psychiatry.” That’s an explosive assertion but also one that doesn’t quite mean what most of you are probably thinking. Scientologists, settle down: Greenberg is not on your side. And talk-therapy pooh-poohers, spare us all those chortles of vindicated scorn; he doesn’t agree with you, either.

Instead of springing for an audiobook for your next road trip, you might want to listen to Marc Maron's comedy podcast, WTF With Marc Maron, like Kyle Minor did recently:

Unlike most stand-up comics, Maron doesn’t use his humor to keep people constantly at a distance. “WTF” is about collapsing the distance between the interviewer and his subject. Maron records the podcast in his garage, and part of the pleasure of “WTF” is that it feels like a thing made in a garage – a recording of a personal conversation between two people who are in the process of exchanging something intimate about their private lives for the first time. It is almost always interesting to eavesdrop on that kind of conversation, a and even more so when the interviewee list includes Conan O’Brien, Sarah Silverman, Chris Rock, Megan Mullally, Ben Stiller, Lucinda Williams and Judd Apatow. Although Andrew O’Hehir would not recommend Baz Luhrmann's “The Great Gatsby” film adaptation for its substance or plot, it may be worth watching for the pure spectacle:

Every rosebush and patch of green on the ginormous fantasy-land estate of the mysteriously rich Jay Gatsby (Leonardo DiCaprio) stands out in brilliant, beautiful fakeness. The water in Gatsby’s never-swum-in swimming pool and the adjoining bay are a heart-stopping blue; the famous light at the end of Daisy Buchanan’s dock is of course a piercing emerald in the mist. As for the dreamlike production design of Gatsby’s enormous, bacchanalian parties – which intentionally suggest every era of debauchery from the Roman Empire to the Weimar Republic and beyond – Luhrmann is in his element. Movie stars swan, showgirls jitterbug and politicians and captains of industry trade the wet, sloppy kisses of corruption; the camera climbs toward the ceiling and then dives through the howling throng, while you can almost hear the Mephistophelean laughter behind it all. Willa Paskin hails "Felt," a TV show that uses puppets to act out dialogue from real couples therapy sessions, "the most creative reality TV show of the year":

If anything, “Felt” is maybe too easy to watch: Adorable is a little strange in a show about couples’ deep, painful, recurring issues. However serious the audio gets, these puppets, all in the Jim Henson-style, move with a bop and a flounce, shading everything toward the light and cute, even when it’s not. One of the couples in the premiere episode, Alex and John, have been together for five years and are in the midst of an almost complete communications breakdown. By their second session, they are both sobbing. But muppets can’t cry; they can’t even blink. (“Felt’s” puppets have much buggier eyes than Bert and Ernie or any of the muppets, which doesn’t help.) The sound of tears has to carry the emotion, while the puppets sit there, faces unchanged, looking cuddly as ever. At one point, the therapist tells John to stop rolling his eyes. Puppets can’t do that either. There’s a lot of body language missing.