How the Republican Party could go extinct

The party has a golden chance to make inroads with Latinos and gays with one immigration move. And it's blowing it 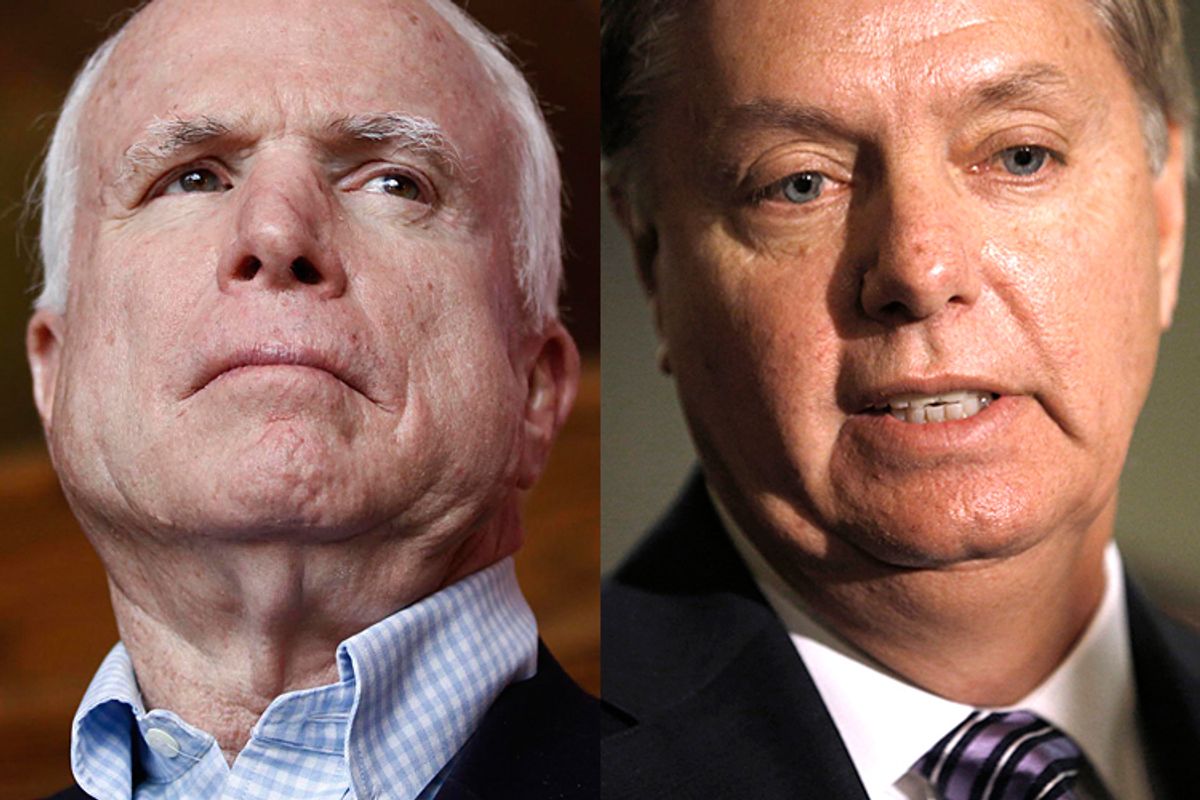 From a pure political perspective, supporting inclusion of same-sex couples in the immigration reform bill should be a slam dunk for both Democrats and Republicans. Scuttling the package over this provision would alienate the growing Latino constituency by blocking a pathway to citizenship -- and denying rights to LGBT Americans would be ignoring the direction of the country on civil rights.

And yet, according to a flurry of news stories from the past couple of weeks, the die is apparently cast on the matter: Allowing some 30,000 same-sex couples the same access to green cards that opposite-sex couples enjoy will halt the bill for 11 million immigrants. Even before the provision has been debated or a vote count begun, Republicans are holding firm to a position that’s literally killing their party. Meanwhile, Democrats run scared, to the detriment of the overall bill.

In plain English: The Republicans need this bill because their party doesn’t have a future if they can’t appeal to Latino voters. On the flip side, Democrats shouldn’t be sacrificing any progressive priorities before the horse-trading even begins because the more they start with, the more they will be able to keep in the end.

Now it may not seem like news that the GOP’s most reliable antigay senator, Lindsey Graham, is threatening to kill the 844-page bill he helped craft over the issue, but it is mind boggling that his three Republican counterparts in the gang of eight (Sens. Flake, McCain, and Rubio) have doubled down on the position that the LGBT provision will sink the bill. Think of it this way, the GOP – the party that has lost the popular vote in five out of the last six presidential elections – has the chance at this very moment to begin transitioning from the party of yesteryear to the party of tomorrow. From the party of declining margins to the party of expansion. And instead of opting for life, they are angling for extinction by threatening to walk away from the bill.

Must we really revisit the fact that the ever-growing tidal wave of Latino voters chose President Obama over Mitt Romney by a margin of 71 to 27 percentage points? Meanwhile, white Evangelicals – the voting bloc that sustained the GOP for almost 20 years – accounted for 26 percent of 2012 voters (a very solid turnout that exceeded their 2004 showing by 3 percent) yet they still didn’t have the juice to push Romney over the top. Simply put, Republicans need the new lifeline that Latino voters represent and, therefore, they need the bill worse than the Democrats. And if the GOP really thinks it can walk away from this bill and justify it to Latinos by saying the gays killed the bill, think again. That rationale may play on the Hill — where most lawmakers live in an insular world of their own making — but it isn't going to work at the polls. The next election won’t be a referendum on LGBT people, it will be a referendum on lawmakers. Plus, in a bilingual poll that was commissioned by the LGBT immigration group for which I consult, 64% of Latino voters said they support including same-sex couples in immigration reform.

The even sadder truth is, Republicans have political cover if they want it. Instead of siding with the social conservatives who have become a millstone around their electoral neck, they could choose to side with Corporate America, which has been lobbying for inclusion of LGBT families in the bill. While Richard Land of the Southern Baptist Convention is piously promising that his organization will pull its support from the legislation if it brings any relief to same-sex couples, a coalition of nearly 30 Fortune 500 companies -- including the likes of Goldman Sachs, eBay, Google and Nike – have been urging the gang of eight to equalize immigration treatment for same-sex couples.

“We have lost productivity when those families are separated; we have borne the costs of transferring and retraining talented employees so they may live abroad with their loved ones; and we have missed opportunities to bring the best and the brightest to the United States when their sexual orientation means they cannot bring their family with them,” the companies wrote to the gang of eight in March.

The GOP has the chance to choose between two constituencies, one of which has nowhere else to go and happens to be in decline (antigay social conservatives) and one of which could choose to turn more of their resources toward Democrats (the business community). By siding with the former, they cut themselves off from generations of Latino voters rather than broadening their appeal. As the Log Cabin Republicans recently noted in this blunt ad, “Reagan’s big tent isn’t what it used to be.”

But even as Republicans doom themselves electorally, one has to wonder about the tactical decision of the Democrats to cede ground on same-sex couples from the get-go.

First, gays are getting more popular by the day. Second, the constituency has proven rather fearless and effective over the past several years in advocating for equality. If there’s one thing LGBT activists and donors have demonstrated, it’s that they are not afraid to go after Democrats when necessary.

That brings us to Sen. Charles Schumer, who spearheaded the gang of eight on the Democratic side and has a sizeable LGBT constituency in New York including a number of vocal same-sex binational couples. Schumer and the other three Democrats in “the gang” bowed to Graham’s wishes from the start by allowing LGBT families to be excluded from the base bill. But Schumer has now distinguished himself further as the sole Democrat on the Judiciary Committee who has not committed to voting for an amendment that Senate Judiciary Chairman Patrick Leahy is expected to offer.

Why Schumer, who is always keen to cut a deal, hasn’t at least feigned enthusiasm for including the LGBT provision is a mystery. If he would fight for the measure, it would not only earn him points with a vital part of his electorate but it would gain Democrats bargaining room down the road. The Dems will almost certainly have to make some concessions in the final bill and that means that the more progressive priorities it includes on the front end, the more will remain intact on the back end.

Think of it this way, every column inch of space the LGBT measure has occupied over the past couple weeks represents a column inch that wasn’t dedicated to other progressive ideals like a pathway to citizenship or that favorite GOP talking point, amnesty. As Greg Sargent of The Washington Post notes, if it turns out that the LGBT provision really does threaten to sink the bill, it could be “spiked later if necessary to salvage reform.”

So what’s next? More than three hundred amendments have been filed and Senator Leahy has slated his committee to consider them over the next couple weeks. Leahy has also signaled his enthusiasm for offering at least one of two amendments that would allow LGBT Americans to sponsor their foreign-born partners.

“You can’t go into a state like mine or — it will be now 11 or 12 states and the District of Columbia — where same-sex marriage is legal, and say to this couple, ‘OK, we can help you with the immigration matter.’ Turn to another couple equally legally married and say, ‘Oh, we have to discriminate against you,’” he told Politico.

But it remains to be seen whether Senator Leahy will offer that amendment in committee or wait until the bill reaches the Senate floor for debate. If it is offered in committee and Democrats all vote for it, it will pass. But if Schumer (or any other Democrat) votes against it, the measure will fail. The alternative is trying to add LGBT families in a floor vote that would require 60 votes to pass – that’s a much higher bar.

Schumer himself noted this chicken-and-egg dilemma on Thursday when speaking about the LGBT measure known as the Uniting American Families Act (UAFA).

“I would like very much to see it in the bill, but we have to have a bill that has support to get UAFA passed,” Schumer said.“That’s the conundrum, because if there’s no bill, then there’s no UAFA either.”

But it’s a dilemma he helped create. Inclusion of same-sex couples has come down to a game of chicken between Democrats and Republicans. Democrats blinked first. And if UAFA fails, Republicans will set their sites on something else.