What a mother should be 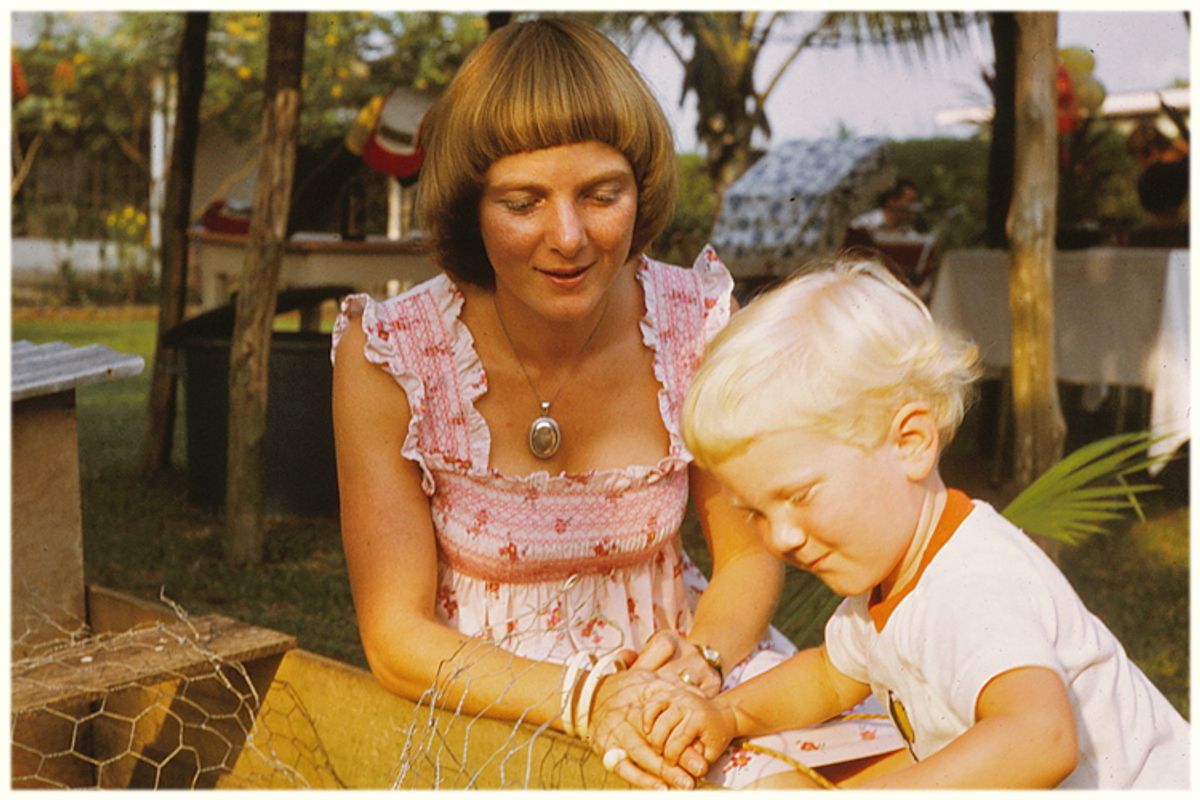 A photo of the author with his mother
--

At 2 years old I got lost in the fresh produce aisle of a supermarket, and the store manager asked for my mother’s name so he could make an in-store announcement. It seems my tears dried immediately, to be replaced by a look of incredulity that any grown-up could be so flamboyantly stupid. “My mummy’s name,” I told the manager haughtily, “is called Mummy.”

At 2, I had no idea that my mother had a name of her own. Why would she need one? It wasn’t as if there was anyone else in our house who cooked eggy bread as a treat on Sunday mornings and who knew where the string and the Band-Aids were kept: Surely there could be absolutely no confusion at all. Nor did it seem likely that my mother had been something else, to someone else, before I was born. She, like all things animate and otherwise, owed her existence to me.

Having no inkling as an infant of the icky processes involved in becoming my mother, I assumed that the title was a rank -- like captain or lieutenant-commander -- to which a strong candidate might be promoted if they demonstrated leadership in the field. That my father was a man and my mother a woman seemed arbitrary: If a golden retriever had met the exacting requirements for either post, the H.R. department would have been obtuse not to appoint it. At 5 years old I remember a Chinese boy only a few months my senior playing the Paganini Variations on the TV news, and he was certainly talented enough to become my mother -- assuming that he could learn the trick of pressing the eggy bread down into the pan as it fried, so that even the gooey center got a really good sizzle.

In fact my mother, at least in this life, has never been a golden retriever or a violin prodigy. A brilliant linguist and a selflessly kind woman now in her spry late 60s, she has a rather lovely name: Rosemary. It is a plant that does not ask much of life -- sunshine if the sun is so inclined, a little rain on the offbeat. It will not shun poor soil, binding it together instead. When you are walking through unfamiliar country, and often when you are weary, it crops up in barren places and its fragrance is a comfort. I go out of my way to find it. The pungent oil opens the door to memory and lets the mind spin back. Ophelia said, “There's rosemary, that's for remembrance.” Rose, the prickly beauty, and Mary, the enigmatic saint: I wonder, is there a better name to remember all our mothers with?

When my brother and I were babies in the 1970s, my mother switched to bottle feeding relatively early. This wasn’t her innovation but that of a medical profession that decreed that formula milk was the healthy choice, while feeding your newborn from a gland you already owned was crepuscular and mammalian. After each bottle of formula, my diligent mother followed doctor’s orders and gave us a bottle of sugar water whisked up with corn starch, in case a billion calories helped. The '70s was the first decade in which nature was benched: You no longer needed milk in order to be a mother.

The embodiment of motherhood has been further refined over the years. In the '80s you needed to have many things in order to be a mother, including acid-wash jeans and a pastel sweat shirt from Benetton, and to drive your kids to soccer you absolutely had to own a dented Plymouth Voyager with wood grain-style vinyl appliqués on the side panels, but -- crucially -- you did not need to be able to get pregnant. After a dramatic journey through the courts, the politics of in-vitro fertilization finally caught up with the science and motherhood took another step closer to being a universal franchise.

I have three children and I try to see them through their mother’s eyes when I’m feeling brave. Forgive me, but as a novelist I rather enjoy being someone else, and I don’t suppose there is any eye more subtle or more apprehending than that of a mother. What defines motherhood? What makes it so monumental and cryptic and compelling? Why, in every successive generation, do women fold themselves into impossible new shapes as they agonize about the right way to do it? The men of my acquaintance, for the most part, don’t beat themselves up quite so hard about the correct way to be a father. I think this has to do with the unequal gifting of grace to the genders: a dove has more reason than a rock to consider the options for its flight path.

It’s worth remembering how quickly ideals of motherhood have changed. The '70s mortified the mammary, the '80s overruled the ovary. By the time the '90s arrived, you no longer even required kids in order to be the ideal mother. What you needed was work-life balance, which you could only achieve with panache if you had a truly fulfilling job -- to excel at which you had to be rotating your body through 90 degrees in order to maneuver your shoulder pads through the door of your corner office, rather than, say, still wearing your nightie at noon while arguing with a 2-year-old about the precise circumstances in which he might, after all, be persuaded to try green eggs and ham. I secretly believe that the most lionized mothers of the '90s were the ones who did not really have children at all, and about whom everyone just assumed that they must have an absolutely terrific nanny back home at 75th and Madison.

Such spectral mothers do occasionally still turn up, reincarnated two decades later as the freshly postpartum executives of Nasdaq companies, giving interviews in which they express their dignified disappointment that the rest of womankind has not yet achieved the kind of work-family balance where they get to spend 80s hours per week in the office. Such women are pioneering and brave and perhaps rarer than the '90s might have predicted, because in the first decade of the new millennium the pendulum lurched the other way. To be a good mother in the noughties you absolutely had to have children again, although it was not at all necessary to be biologically related to them. Adoption, from close to home and from every page of the atlas, is a growing social phenomenon. Surrogacy, too, is increasingly an alternative for those who can afford it. These days insofar as motherhood is concerned, a woman must have money, but she does not need a womb of her own.

Why is the identity of motherhood so vexed and so mercurial? It’s easy to blame men, so let’s do that. A lot of the problem is that men write so many scripts for mothers. I’m guilty of this myself. As a mother, having men represent your point of view, whether in fiction, film, editorial or advertising, must sometimes be infuriating. Mothers must often feel as did Ed Viesturs, the first American to climb all the world’s highest peaks, when he provided the ultimate riposte to armchair adventurers of all stripes: “People who criticize are ignorant or stupid. They should go out and climb fourteen 8,000m peaks and then we'll talk.”

Men have always brought colorful and conflicted scripts to motherhood. Jocasta loved her offspring a little too much; Medea a little too little. The most famous mother in Christianity was a virgin, according to sources. Now in one branch of the religion she is venerated, while in another she has the subordinate status of a modern-day surrogate, expedient rather than influential. We have never agreed what a mother should be, and neither can we agree how we should feel about that.

The maternal script is changing ever more rapidly now, as each generation of more empowered and more powerful women writes its own lines for motherhood. Perhaps we are moving toward a more enlightened time, where we respect the role but not the rules. Every mother is on the front line of this change, and for all we know there really is no right way to do it. So to all of the mothers who are reading this: happy Mother’s Day, and thank you. May your children remember to send you flowers, because you darned well deserve them.

I want to tell you how the supermarket story ends. The store manager, with a straight face, picked up the microphone of the public address system and announced: “We have a little boy here at the checkout and he is 2 years old and he has lost his mummy and his mummy’s name is called Mummy. So, Mummy, please could you come to checkout seven to collect your child?”

From all corners of the store they came, women of all ages: mothers whose children were away down the street in daycare, mothers whose children were off at university, mothers whose children had long since left home and established themselves as realtors and public health officials in far-flung cities from which they telephoned with insufficient frequency and visited even less. I remember those women now, converging on me and the store manager in a compassionate rush and a fluster. It seemed that none of them had lost the habit of answering, instinctively and without a second thought, to the name of Mummy. Whether the child was their own biological issue did not matter at all: a small boy had used their truest and most secret name and so they came straight away, just in case they could help. Shopping trolleys were abandoned where they stood, and here came this motherly stampede of floral caftan and peach sorbet crinoline – this was the '70s, after all – and there to lift me in her arms, in the midst of them all and radiant with relief, was the woman whose name is Rosemary.

I have never been so glad to see anyone in my life.

Chris Cleave is a novelist who lives in London with his wife and three children. His novel "Little Bee" was a NYT #1 bestseller and his new novel "Gold" is out now in paperback.